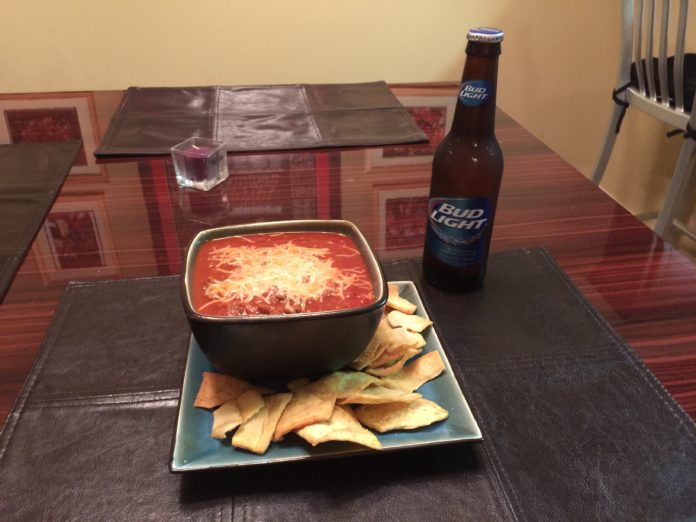 If you remember my last attempt at cooking, I tried to make some scrumptious cheesy potato soup. Tried being the key word here. It looked good, but tasted awful. There were little dark bits in the soup that looked like the bacon I had put in, but they were actually flakes of burned flour that had scraped up from the bottom.

The moral of the story last time was “be prepared.” I clearly didn’t follow my own instructions this time.

The recipe this week is for chili. This is my mom’s recipe for her homemade chili, so I thought I would give it a whirl and try it out.

Let me just say this again – “BE PREPARED”.

Since I play World of Warcraft more than any other game, this kept running through my head as I reached the point of “Oh crap, I’m stuck.”

More on that in a minute.

This is where it gets fun.

As you can see, I had all my stuff set out on the counter, ready to cook. I made sure I had defrosted the meat, gotten everything together, and ready to cook. I wanted to cook the meat in the same pot as the soup so luckily I wouldn’t have the same problem of not being prepared there. If you remember, with the potato soup I had to cook the bacon and cut the potatoes at the same time I was making the soup, which is why I burned everything. 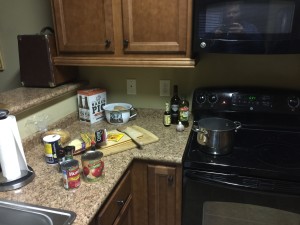 I started cooking the meat in the pot, stirring it around occasionally until the meat was all cooked. After the meat was cooked, I through some onions in there. Now, you could chop up an onion, or by the prepackaged chopped onions from the grocery store, which is what I did here. It’s much easier to deal with so you don’t cry like a baby like I do when I have to chop it myself. Plus, I’m really bad at chopping.

When the meat is good to go, add a packet of taco seasoning to the meat. It adds good flavor to the meat and the chili overall.

Now that the meat was stirred up and the onions were cooked into the meat, it was time to add in the crushed tomatoes and tomato sauce. Only….I DIDN’T HAVE A CAN OPENER.

This is why you need to be prepared. There is a reason that in cooking shows, they have everything out in neat little bowls that they can just dump in the pot when they need to. So be prepared and open anything that needs to be opened before hand. If I had done that, I would have realized I didn’t have a can opener from the start, and could have gone to get one.

So here I am with the meat cooked up and ready to go, and I have to stop what I’m doing and get a can opener.

After a 30 minute trip to Publix, I came back with my can opener to find cold, hard meat in the pot. Pro tip, don’t forget to turn the stove off before you leave it this ever happens to you. I’m not that big of an idiot, but it never hurts to mention.

So I turned the heat back on and heated up the meat. Then I opened the can of crushed tomatoes first, and poured them in. Make sure to stir it up good. I like to then add a can of tomato sauce to add a little more to it. My mom told me either crushed or sauce, but I did a little can of sauce, and a 28 oz. can of crushed tomatoes together. I don’t remember the sauce can size, but it was much smaller. It’s just for a little thickening of the chili.

Stir all of that up, and it will start looking and smelling like chili. Add some spices such as salt and pepper, and test it to see what you think. If it could use some chili powder, then add some. But be careful to not add too much. I think I did, but it didn’t ruin the chili. Just feel it out. 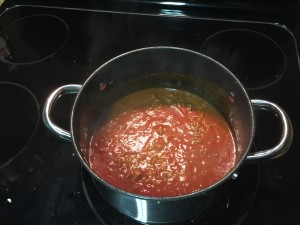 Get your soup ladle and fill up the bowls, you’re good to go. Add some cheese on top, and a little sour cream wouldn’t hurt either. Cheese really makes this a solid soup. I almost thought about throwing some in the soup when it was cooking, but didn’t know if that would be such a good idea.

Another idea I thought about was to add some bacon. I didn’t have any, but if I had any left over from the potato soup, I definitely would have thrown some in there. You’ll also notice this recipe has no beans. This chili is a recipe my mom uses because my dad doesn’t like beans. I don’t mind beans in my chili, but too many beans and it’s not good.

Grab your favorite beer, and you’ve got your meal. I added some pita chips for flavor to have some kind of bread with it (I didn’t have any actual bread).

There you have it, a great bowl of chili to enjoy. This recipe makes about four medium sized bowls. The moral of this recipe is again – BE PREPARED! Make sure you have all the right ingredients, the right hardware, and make sure it’s all easily accessible and that every package and can is open.