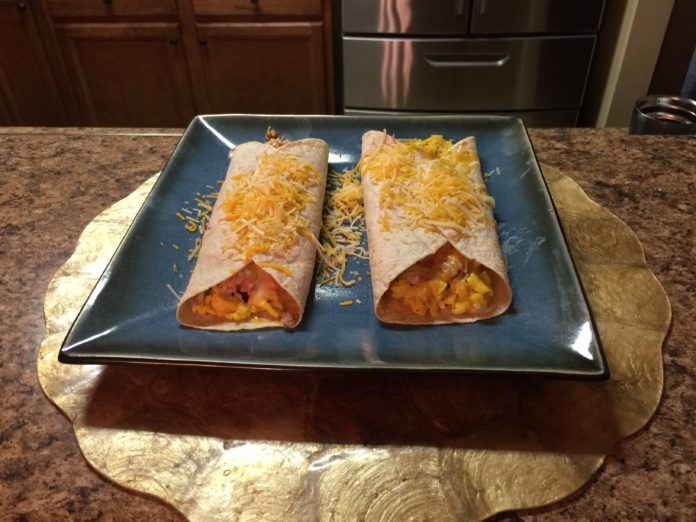 So in my various cooking sessions the last couple of weeks, I ended up with a lot of leftovers. I decided to take a stab at doing something with all of it this weekend and see what I could come up with. I had a little bit of various meals left over, and none of it really amounted to anything I could use again for a full meal by itself. The results might sound nasty – but it was awesome.

I basically made an Italian Pork Breakfast Burrito.

Here were the leftovers I had:

– Vodka Sauce and Alfredo Sauce from making pasta
– Eggs (that I needed to use before they went bad, it was getting close to that time)
– Pork from a Boston Butt
– Tortillas from making tacos
– Cheese from making soup, pasta, tacos….who doesn’t use cheese in everything? 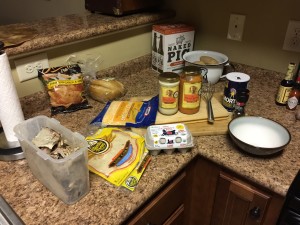 All of that probably sounds terrible put together, but it was one of the greatest things ever. Here is how I made it.

First, crack three eggs in a bowl, add some salt and pepper, and whisk it up until it’s all nice and mixed together. I actually did four, but that was a little much. I only did that many because I was trying to use them all.

Then get the pork out. I honestly have no idea how to measure the pork I used, you just have to guess. But I had a “hunk” of pork that I used. If you look at the picture with all the ingredients, it’s the top piece you can see, and that’s all I used. I put it on the cutting board, and chopped it up really small, as you can see in the picture. This pork was already cooked, so it just needed to be heated up. 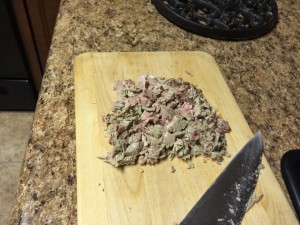 Get a small skillet out that you would normally prepare eggs in, and light up the stove. Pour the eggs in the skillet and let them cook. Just scramble them up like you would for normal scrambled eggs.

Once the eggs are fully cooked, throw the pork in really quickly and mix it together so the pork gets hot. You can keep them separate and just heat the pork up in the microwave as well.

While you’re doing all of that, take your sauces and heat them up. You don’t want cold sauces. So whether you just put the jar in the microwave or whatever you do – heat it up.

Once the pork and eggs are all nice and warm and ready to go, take it off the stove. Get your tortillas out and spread the eggs and pork on them. Then take just a small bit of both sauces and drizzle a thin line over the meat and eggs.

Now, I could live 100 years, and I will still never know how to fold a burrito properly. It didn’t help that my tortillas were a little small compared to the ones you see at Moe’s or Chipotle or some place like that. So I just filled it up and folded the sides over it. I then put a small bit of cheese between the two folds and stuck it in the microwave for just a few seconds. What this did was heated up the cheese and melted it, and that let the burrito stay folded.

This was the final result: 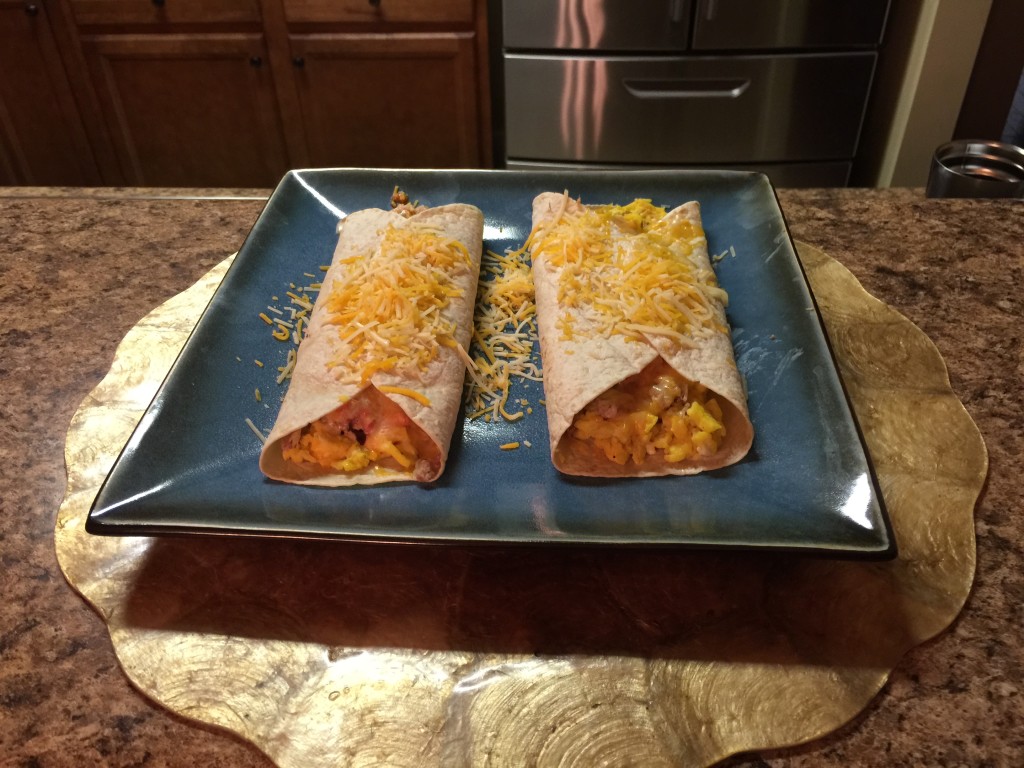 All of this may sound nasty, but it. was. awesome.

It doesn’t take much to make me happy. I’m the kind of eater that doesn’t like most things, but the few things I do like you can mix it all together and I’ll be perfectly content.

So if you ever have leftovers, along with some eggs, try it in a breakfast burrito on weekend morning. You won’t regret it…or maybe you will. But I didn’t.