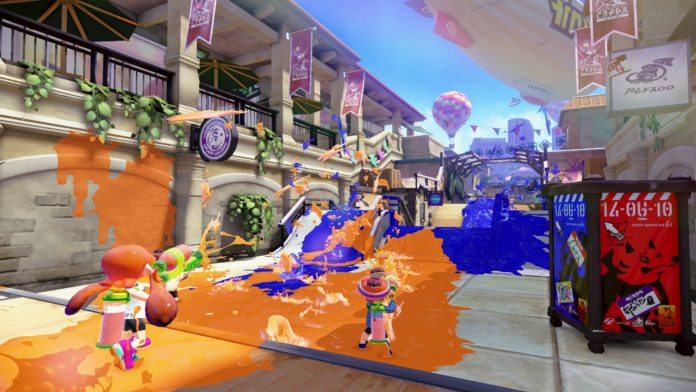 It’s been almost a full week since the release of Splatoon for the Nintendo Wii U. I’ll admit, this was the game that pushed me to the edge and made me buy a Wii U. I had it for a week before the game came out and I played plenty of Mario Kart 8 and Super Smash Bros. on it in that time. There are games I enjoy on Nintendo consoles, but this new original IP was one that got me excited enough to pull the trigger.

Splatoon, for those that don’t know, is a third person shooter that combines elements of kid’s Nintendo games with the mechanics of games like Gears of War. Instead of shooting people and getting headshots, capturing flags and planting bombs – you shoot ink all over the place and try and paint more of the map in your color than the other team. You don’t kill the other characters, you splat them.

Use whatever terminology you want – it’s a third person shooter.

Splatoon offers a little bit of something for everybody. If you are a hardcore competitive gamer, the 4v4 multiplayer is the perfect mix of fun and a serious shooter. If you prefer to play alone, the single player campaign is reminiscent of the 3D versions of Mario, Zelda, and other single player games on Nintendo consoles. You can also battle 1v1 against your friend using the gamepad and controller.

There are areas where Splatoon lacks, such as the options in multiplayer for custom games, partying up with your friends to make sure you are always on the same team, and other options, many of which are slated to come out soon via DLC. But the game is fun enough you forget about those missing items and just have fun spraying colorful ink everywhere.

In the single player campaign, you play Agent 3, working for Cap’n Cuttlefish in the race to get Zapfish back for the city of Inkopolis, as they are the source of power in the town. You have to venture into Octo Valley to get them back from the evil Octarians, basically the evil equivalent of yourself. There are many different types of Octarians, and you have to clear the level so that you can rescue the Zapfish at the end.

You fight through different levels on various islands until you get enough Zapfish to unlock the boss for that area, a massive Octarian that requires a little more than just a few splats of ink to take out. The boss fights really remind me of Zelda boss fights, and at times you think you’re actually playing a game like Wind Waker.

When you kill the boss, you can move to the next sector, and you get a blueprint that can unlock weapons for you in multiplayer.

The multiplayer is a 4v4 team based game that has two variations, ranked and regular. For each mode there are two maps on rotation every four hours. When you queue, you are put in a room with seven other players and then split into two random teams of four on one of the maps.

In regular mode, your objective is to cover the majority of the map in your ink. You fight for three minutes, and whichever team has more of the map covered, wins. It’s simple and straightforward – the map has no ink on it to begin with, and if the other team inks an area, you can ink over it and control it. You can level up to level 20, which is the max and will allow you to unlock all the gear and weapons in the game (that are available from multiplayer).

Ranked mode is a little different. Instead of having a level, you have a grade. You start at C-, and try to work your way up to a C, then C+, then B-, and so on. You get a certain number of points for winning, and lose half that many for losing. For instance, you get 20 points at C- to move up to C, but lose 10 if you lose.

The game play is different as well. The two maps aren’t always the same as regular mode, allowing up to four maps to be played within the four hour time frame. In ranked mode, you have to control one particular area of the map, and any other areas you paint are strictly there for positioning. Whoever controls the area, their score starts ticking down from 100. It’s a race to see who can get to 0 first, and that team wins.

I’m more of a fan of the regular mode than ranked mode. We’ll see if they add any other modes in the future and how fun they are. Regular mode is just so much more fun, and you can play it with your friends (you can only solo queue for ranked mode at this point in time).

Here is a clip from a game that I played with Skyllus a few nights ago to give you the feel for a game:

The sky is the limit for a game like this, there is so much that can be done. The single player campaign is a little easy and a little short. I completed the campaign mode in about 3-4 hours, and only actually died once (died where you had to start the level over, you get up to three tries at each checkpoint). My one death was on the final boss, which was really cool, but predictable enough after playing it for a while. It still reminded me of Zelda, if Zelda was about a squid vs. an octopus in space.

Another great part of this game is Inkopolis itself. It’s very similar to the tower in Destiny, but this is the actual hub for every part of the game. You are basically in a town square with various places to go such as shops where you can upgrade your weapon or clothes, go to the multiplayer lobby, go to Octo Valley (via a sewer), or just walk around and see other players (not live players) and their Miiverse sketches.

That’s a great part of this game as well. You can draw something in the Miiverse, and it will appear as a billboard in the multiplayer games so people can see what you’ve drawn.

All in all, this game delivers. The $59.99 price point may seem a bit steep for the short campaign and only two multiplayer modes, but the game has already added a few maps, as well as a couple of other items such as weapons. Nintendo seems dedicated to the long-term success of this game, and already announced more would be added later. Even if you don't make it that long, the little bit you do play will be exciting.

If you want to have fun, but also scratch that competitive shooter itch on a Nintendo console, this game is well worth the pick-up.