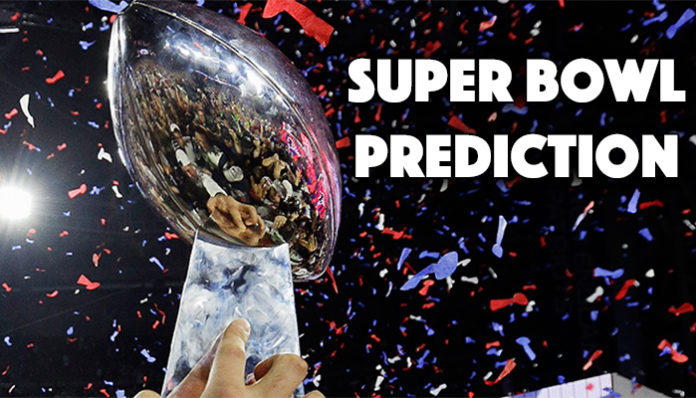 The NFL season is finally upon us tonight as Pittsburgh and New England kick things off tonight in Foxboro.

I don’t necessarily like to brag about being 3 for 3 over the last three years in picking Super Bowl champs before the season started, but too bad, I’m going to brag about it.

In 2012-13, I said Baltimore would win on the Meltdown, and they did. My co-host, Tim Melton, will claim that my pick should have an asterisk next to it since I lost faith in the Ravens winning it all mid-way through the season because of injuries, but regardless, I picked them. I didn’t pick an opponent, and I probably wouldn’t have thought it would be the 49ers at all. But the Ravens proved me right and won the big game.

In 2013-14 I said Seattle over Denver. I didn’t have a radio show or any other outlet to put it out there on, so here is the tweet that started the season:

Then last season I said New England would take out Seattle. I called it all year long, but more than that, I was one point off the final score before the game happened. It ended 28-24 not 27-24. So close…

Well, as we get closer to kickoff, I said New England would beat Seattle before the season started, so I won't change now. NE wins 27-24.

So who will win the Super Bowl this year to make me 4 for 4?

Your Super Bowl 50 champs will be the same as the Super Bowl 1 champs:

Why will the Packers win? Simple, because they are the most talented, and most balanced team.

The loss of Jordy Nelson hurts, but so did the loss of Robert Brooks in 1996, and the Packers still went 16-3 and won the Super Bowl. Aaron Rodgers still has Randall Cobb and James Jones who are plenty capable receivers, and Aaron Rodgers is just….Aaron Rodgers.

Eddie Lacy is going to have an outstanding year and be in talks for the MVP at the end of the season, and James Starks is going to be that second, quicker option out of the backfield that will contribute in many ways. I’ve always said that a team HAS to have a good running game in order to win the Super Bowl. We saw it with Baltimore with Ray Rice and Seattle with Marshawn Lynch. New England was a bit of an anomaly, but it’s the reason they dominated the Colts so much behind LeGarrette Blount’s 178 yards and 3 TD’s.

Up front, Josh Sitton is going to lead the offensive line as one of the best pass blockers in the league. He hasn’t given up a sack in two years. According to Pro Football Focus, Bryan Bulaga was the second-best pass blocking right tackle in the league and ranked fourth overall. TJ Lang finished last season ranked as the #2 right guard in the league. Combine that with Sitton and Green Bay has arguably football’s best guard tandem. Those two guards combined with Corey Linsley will give Eddie Lacy all the blocking he needs to plow through the defensive line and linebackers.

The only question will come at the most important position on the field – left tackle. David Bakhtiari finished with a negative rating last season and there isn’t a capable backup to come in and take his place should something happen. Bakhtiari will have to step up big time to complete an otherwise solid offensive line.

On the line, BJ Raji comes back after missing last season to anchor the defensive line that features a few new faces. Mike Daniels has been trying to force the front lineman to be tougher and more physical this season to stop the run and get a pass rush. If there is one weakness this season, it’s in the defensive line.

The linebacking core remains strong with Clay Matthews and Julius Peppers. Then the secondary remains fairly strong with Ha Ha Clinton-Dix and Sam Shields. Casey Hayward needs to have an amazing season at cornerback because he’s in a contract year. The secondary has some depth coming in with rookies Quinten Rollins and Demarious Randall as well, so they should do well against the pass.

The problem will definitely come against teams with strong run games, and that could hurt them as they face teams like Seattle in Week 2 (and inevitably in the playoffs again), and of course with the return of Adrian Peterson in Minnesota. Like I said before, a strong run game is a must to win a Super Bowl, and that could be a problem when it comes down to it.

Guess what? Brandon Bostick doesn’t play for you anymore! Now you don’t have to worry about botching another onside kick that would have taken you to the Super Bowl. Granted, they blew that game in a multitude of ways, but that one play will haunt Bostick for the rest of his life.

Ty Montgomery is going to be an outstanding return man for Green Bay. The rookie out of Stanford will contribute in small ways as a receiver, but after his record breaking almost 2,500 return yards in his career at Stanford, he will be strong in the NFL.

Mason Crosby is always a solid option, making four 50+ yard field goals last year. Tim Masthay isn’t the best punter in the league, but still a solid, experienced punter who can help with field position. Of starting punters, he punted the least last season with only 49 punts. Compare that to other punters in that division with 68, 71, 75.

Other reasons they will win – Olivia Munn

So there you have it. Your 2016 champs will be the Green Bay Packers.

I’m not going on record as saying who their opponent will be, but I am leaning toward Baltimore or New England to be the AFC representative. The Colts aren’t a bad pick, and neither are the Broncos with their defense and Peyton Manning, but I feel like the Ravens and Patriots are going to be solid teams this year. So while I’m definitely going out there and saying the Packers will win the NFC and Super Bowl, I’m tentatively picking the Ravens or Pats to win the AFC.

I think the Seahawks will be Green Bay’s opponent again in the NFC Championship. They are a sexy pick to win the Super Bowl this year as well, especially with the addition of Jimmy Graham. I just think Green Bay gets the better of them this year. Remember how much the Packers were dominating them last year before blowing it in the 4th quarter.

We’ll see if I’m right for the fourth year in a row, or if the Packers go 0-16, which would make me equally impressed.