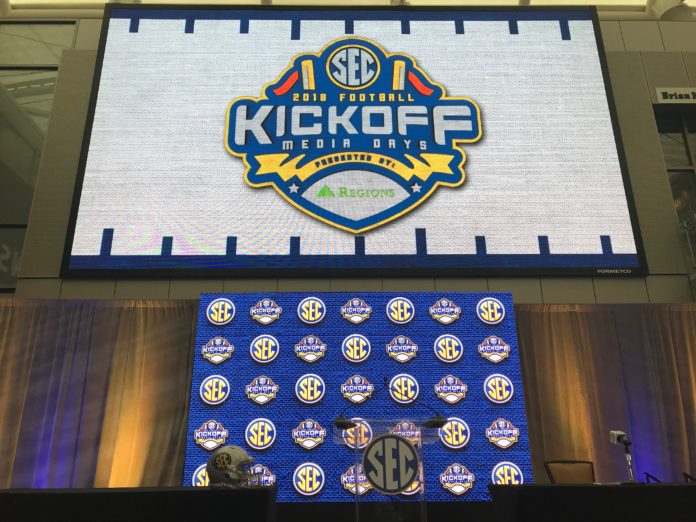 The Southeastern Conference has provided the coaching line-up for the 2019 edition of SEC Media Days.

The event will take place July 15-18 at the Hyatt Regency Birmingham – Wynfrey Hotel in Hoover.

Alabama head coach Nick Saban will headline the event’s third day on Wednesday, July 17. Auburn head coach Gus Malzahn is slated to speak on the last day of the event on Thursday, July 18. Georgia’s Kirby Smart, Tennessee’s Jeremy Pruitt, and Texas A&M’s Jimbo Fisher will all be at the podium on Tuesday, July 16 while Florida’s Dan Mullen and LSU’s Ed Oregeron help lead off the event on July 15.

SEC Media Days returns to Hoover after spending last year in Atlanta. It was the first time since 2001 that the event wasn’t hosted in the local venue.

More details in the daily schedule such as television information, rotational breakdown, and the players attending will be made available at a future time prior to the event. The SEC Network and ESPN will again provide coverage of Media Days.

Since the first SEC Championship Game in 1992, the media at the event have predicted the conference champion only seven times. However, three of those have been in the last five seasons. 2018’s title game was the first time since 1999 that both division representatives were picked correctly. It was also the last and only other time since 1994 when the two division winners and the conference champion were accurate.

Names are listed in alphabetical order by school.