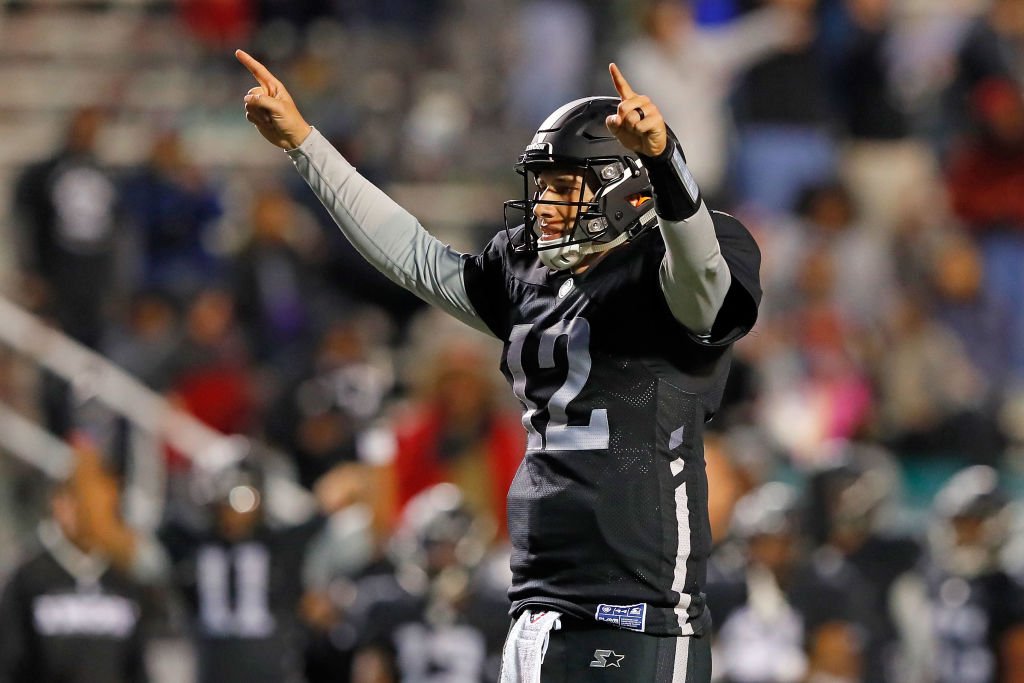 Week two is in the books and not much has changed within the power rankings. Teams like Memphis looked a lot better than week one, but teams like Orlando continue to shine. Although there are three undefeated teams still, all of them struggled at points and were down at halftime before making a comeback.

Here are the latest Alliance power rankings and how teams shifted from week one:

The only real change this week is moving Orlando up to #1. The Apollos look to be the best team in the league as they have put up 40 and 37 points in their two games. While Arizona and Birmingham are also undefeated, they struggled more in their wins compared to Orlando. However, Orlando was down a couple of scores early, trailed by one at halftime, and was down by as much as 12 in the third quarter, but rallied back to win by 8 and have shown how good their offense is while also putting up a defensive touchdown each week as well.

All three undefeated teams showed weaknesses, but on thing that hasn’t been weak is Steve Spurrier’s powerful offense in Orlando. Garrett Gilbert looks to be the best QB in the league, going 34/53 for 620 yards and 4 touchdowns with no interceptions. He’s also caught a touchdown pass as well.

Orlando returns home this week to host Memphis who is winless and they look to continue to hold the top spot.

Arizona struggled in their game against Memphis, and the biggest reason for the drop is how bad Memphis looked against Birmingham in week one (another team that struggled this week). John Wolford struggled early with two first half interceptions, but he was the catalyst for their comeback throwing two second half touchdowns and running in an all important 2-point conversion in the fourth quarter which ended up being the difference maker. Wolford is first in the league with six touchdown passes and second among starters in completion percentage at 62.7% whil being third in overall yardage. He’s also first among quarterbacks with 48 rushing yards.

This week, the Hotshots travel to Salt Lake as the Stallions look to avenge their week one loss at Arizona.

Birmingham did not play well in this game and really have to thank a multitude of missed field goals from Salt Lake for winning this one by 3. Salt Lake lined up to kick five field goals and only made one while missing a couple, one hit the upright and one had a botched snap. Trent Richardson only had 41 yards on the ground but did get his third touchdown on the year from 2-yards out to give the Iron the lead and the win in the fourth quarter. Richardson also led the way with 6 catches for 50 yards. Last week’s star Quinton Patton only had 3 catches for 44 yards.

The defense bent but only broke once late in the second half when Joel Bouagnon broke through for the only touchdown that has been scored on the Iron. They did allow 151 yards rushing to Salt Lake, which shows the kind of damage someone like Zac Stacy could have done last week if given an opportunity.

This week, Birmingham heads on the road for the first time as they take on winless Atlanta.

San Antonio suffered their first loss of the year as they fell to Orlando, but they were up by as much as 12 in the second half before allowing Orlando to come storming back in the fourth quarter. Logan Woodside played just alright going 20/39 for 223 yards with 1 touchdown and 1 interception. Kenneth Farrow moved into fourth in the league in rushing with a 74 yard performance including a touchdown. The offense put up 398 yards of offense and scored 29 points showing they are capable of putting up the points to beat anyone. On defense, they held tough at first, but broke late. They led Orlando by one point at halftime, and had out-gained the high-powered Apollo offense.

This week, they’ll look to get back to winning as they face San Diego on the road, who they beat last week 15-6.

Salt Lake should have moved up the list with a win over Birmingham, but fell late to the Iron. The Stallions led 9-0 at halftime, but couldn’t do anything in the second half. Josh Woodrum was injured last week, but Matt Linehan wasn’t given the start. Instead, former Arkansas quarterback Austin Allen got the start for Salt Lake and went 15/31 for 114 yards. Joel Bouagnon had a good day with 11 carried for 70 yards and a touchdown. Brandon Oliver had 14 carries for 59 yards as well. They Stallions gave the blueprint for running on Birmingham’s defense and did so well, but they have to figure out their passing game and work on their kicking game. They went 1/4 on field goals that should have won them the game (and a fifth field goal that was a botched snap).

Coming up, Salt Lake gets to host Arizona in a rematch of week one which saw the Stallions lose 38-22.

San Diego got the win, but didn’t move up the power rankings because Salt Lake has looked better overall. The Fleet got a win over the worst team in the league in Atlanta and just like every other winner this week, they were down at halftime and had to comeback in the fourth. Ja’Quan Gardner had the best rushing performance of the week (and the best of the year so far) with a 104 yard performance which included two touchdowns. He also has the highest average yards per carry of all running backs in the league with at least 20 carries.

On defense, San Diego held Atlanta to only 222 yards.

San Diego gets a chance to advance to 2-1 if they can get a revenge win against San Antonio at home this week.

It’s no shock that Zac Stacy is arguably the best running back in this league. They let him loose a little more in this game and with it he became the first 100-yard rusher in a game in Alliance history with 19 carries for 101 yards and a touchdown. The Express was up 12-0 at halftime, and then 18-6 in the fourth quarter before Arizona stormed back to win. Hackenberg played better, but was still only ok in the defeat (although he did have 39 yards on the ground and a touchdown). The defense got three takeaways and the offense gave up none which is what made this game so close. The jury is still out on Memphis overall.

This week, Memphis travels to Orlando to take on the Apollos Saturday night.

Atlanta was ahead at halftime, but couldn’t sustain the momentum as they fall for the second week in a row. Matt Simms still got the start and was 17/25 for 160 yards with 1 touchdown and 1 interception. They only got 222 total yards which is right where they were last week at 224 yards. They only turned the ball over once, which is an improvement on their four turnovers from last week, and were actually +1 in turnovers this week. But their only consistent scoring is Younghoe Koo who is 4/4 on field goals this year. Running back Akrum Wadley was out for week one, but caught all 8 of his targets for 70 yards this week and may be the best weapon for Simms (or whoever the QB may be), although he only had 4 carries for 12 yards.