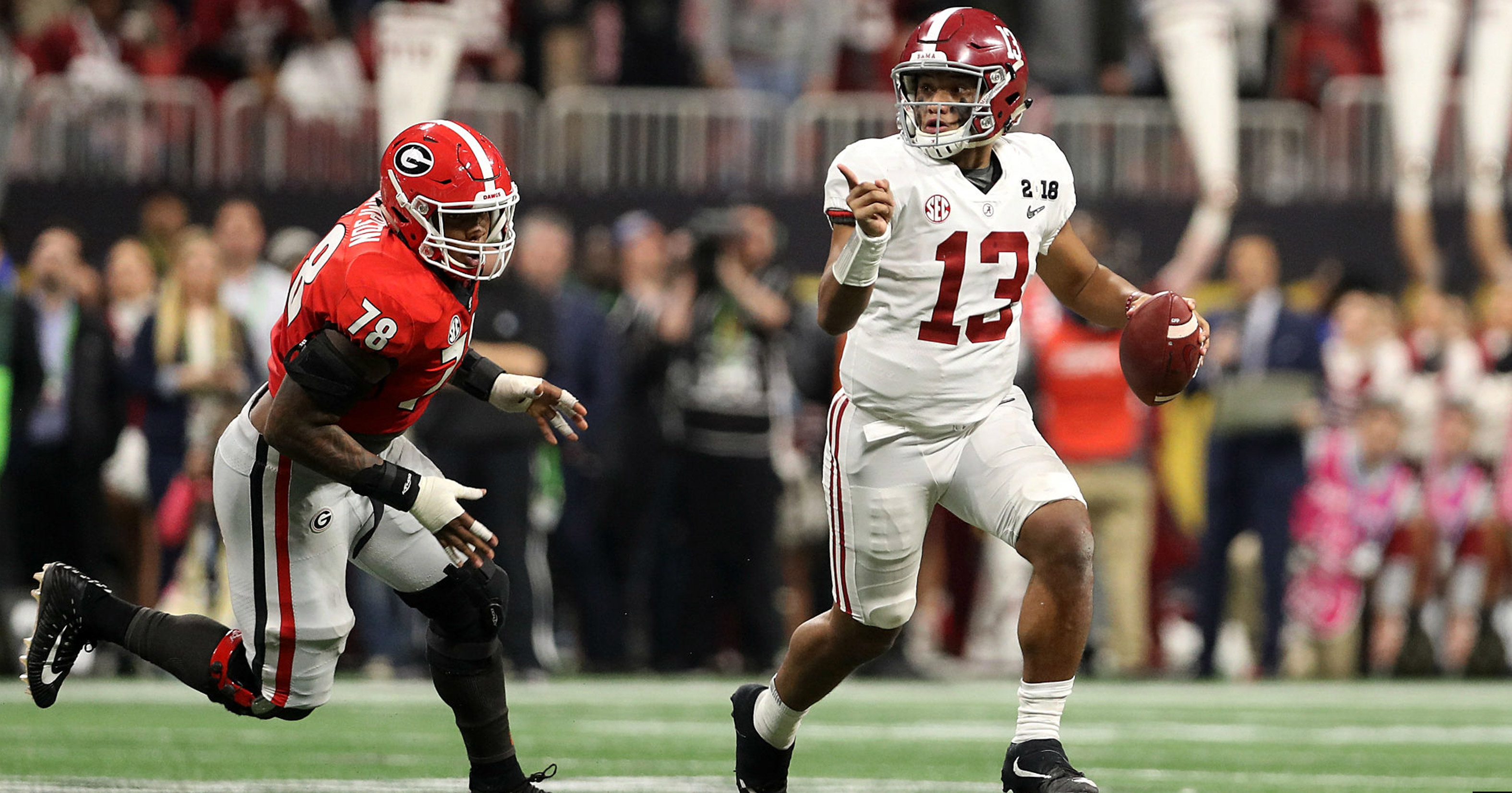 Tonight’s Lunce’s List turns from the 2019 NFL Draft to next year’s draft where there will be a lot of intrigue around where certain players will end up. Perhaps the most intriguing player is Alabama quarterback Tua Tagovailoa. Many fan bases have already started using the hashtag #TankForTua knowing their team probably won’t do much this year. According to the Westgate SuperBook in Las Vegas, Tua is the overwhelming odds on favorite to be drafted #1.

Here are the top 10 potential #1 draft picks in 2020 according to Westgate:

Overall, in terms of potential QB’s that could be first-rounders, only two stand out in all 2020 mock drafts – Tua Tagovailoa and Justin Herbert. Jake Fromm (Georgia) pops up from time to time, as does Jacob Eason (Georgia/Washington). You’ll see the occasional random QB like Nate Stanley (Iowa) or even Jalen Hurts (Alabama/Oklahoma), but you have to imagine guys like that will be early second round pick-ups at best for teams that may have a need, but can’t get Tua/Herbert.

When it came to how I approached this list, there were a few ways to look at things:

First, what teams will most likely NEED a quarterback next year?

Second, what teams can actually tank for a draft pick? In other words, what teams actually won’t be very good this year?

Third, there are a large number of really good quarterbacks who can still play playoff caliber football, but who will hang it up soon and Tua could be that next franchise guy, so how could they potentially get their hands on him?

With these questions in mind, I looked at the overall success of the franchise, where they have picked lately in the draft, and what their needs could potentially be next season. I also looked at Vegas win totals and player contracts as well.

Here are the latest Vegas win totals for each team:

Here is the list of places that Tua could end up next year. Each team has last year’s record, this year’s Vegas projected win total, and current quarterbacks on the roster after the 2019 draft and trades (expected starters in bold).

Jameis Winston’s contract expires after this season. If Bruce Arians can’t do something with him, then there is no point in signing him to an extension. Blaine Gabbert is nothing but a back-up so they will have to make a move most likely. This is an easy pick other than the fact that they may not finish dead last in the league, therefore not have the overall #1 pick.

You would assume that Josh Rosen will be the starter now over Ryan Fitzpatrick, but we’ll have to see who ends up as the #1 guy. Regardless, the Dolphins are expected to be in the best position to potentially make a move for Tua. You have to think about contracts here with Josh Rosen only being on the second year of a first round deal, but the Dolphins would only take on $5 million in dead money if they dropped him after this season and potentially save Fitzpatrick as a back-up (or vice versa).

They are likely to have a high draft pick no matter what, it just depends on if they see anything in Josh Rosen long-term.

Derek Carr has a giant contract thanks to a great season a couple of years ago. However, he was benched at one point last year for AJ McCarron. Mike Glennon is a journeyman back-up and the other options aren’t great.

The Raiders are in a position where Carr’s contract doesn’t have any full guarantees left so they can move on if Carr plays in 2019 like he did last year. They are also in a position to make a splashy move heading to Las Vegas in 2020.

Bottom line – Nick Foles isn’t a long-term solution. He wasn’t in Philly and he won’t be in Jacksonville. The problem is that Jacksonville probably won’t be able to get that #1 pick and may prefer to settle on a QB like Justin Herbert a few picks down. If Nick Foles stays for a couple of years, #TankForTrevor could be more in their future.

Josh Allen is still a work in progress. He only completed 52.8% of his passes last year throwing for 12 interceptions and 10 touchdowns. Buffalo will also be in the market for some defenders as well which makes you wonder if they will even want to go after Tua, or maybe keep their eyes on a QB in 2021 like Trevor Lawrence. The way Vegas is thinking, they will be picking in the top 10, maybe top 5 but will they get to #1 and who ends up worse off – them or Miami out of the AFC East?

The majority of mock drafts I’ve seen have a defensive end of some sort going to Buffalo, no matter where they pick, and most drafts have them in the 5-10 range in the order based on projected wins.

Overall, I just don’t have faith in Josh Allen. Derek Anderson and Matt Barkley aren’t legitimate options which means they may need to go QB depending on where they fall in the draft. That could mean Tua or it could mean Justin Herbert, Jake Fromm or another QB.

Andy Dalton is still sticking around, but Jeff Driskel could step in or their new rookie in NC State’s Ryan Finley. So even though they aren’t real good, they most likely won’t be in contention for Tua. However, they are close and could make that move if they ended up at #1.

Carson Wentz is supposed to be the franchise guy, but now he doesn’t have Nick Foles to back him up and doesn’t really have a suitable back-up if he has health problems (despite what Birmingham Iron fans may think). They have a good enough team to make it where they couldn’t pick Tua even if they did want to pivot away from Wentz.

I thought about putting the 49ers here, but there is still a lot of stock in Jimmy Garoppolo to turn things around in the Bay Area. I doubt they go for Tua if they end up near the bottom yet again.

This is a team I hesitated putting on the list because Mariota can still be one of the best in the league when healthy. Ryan Tannehill can be good when healthy too. It all depends on if they want to shift away from Mariota, but they are good enough to never really be in contention for Tua barring a crazy trade.

Teams that don’t need to tank, but could potentially use a game-changing QB in the near future:

The Ravens are putting all their chips on Lamar Jackson, and that’s a gamble that could ultimately fail (and do so rather early). I still don’t see them being anywhere near the top to potentially get Tua, but if two Heisman winners and new draft pick Trace McSorley don’t work out – maybe that says more about the front office than anything.

Philip Rivers is one of those that we are all waiting on to retire. Tyrod Taylor is the back-up now, but would they want to make him their new franchise guy? I doubt it, but they are also going to be really good this year, so it will be near impossible to get Tua.

Same story for New England. We’re all waiting for Brady to retire, but will they wait for another QB next year or go with their late round draft picks in Danny Etling/Jarrett Stidham from Alabama’s rivals?

Big Ben won’t last much longer, but the Steelers are going to look to Josh Dobbs or Mason Rudolph unless they can find their perfect next QB late in the next couple of drafts.

Every projected starting quarterback in 2019:

Bold = Considered for the list
Italics = Could need a QB soon, could make a play for one even though they can’t get #1 pick
Underline = Made a move this year so I left them out of contention