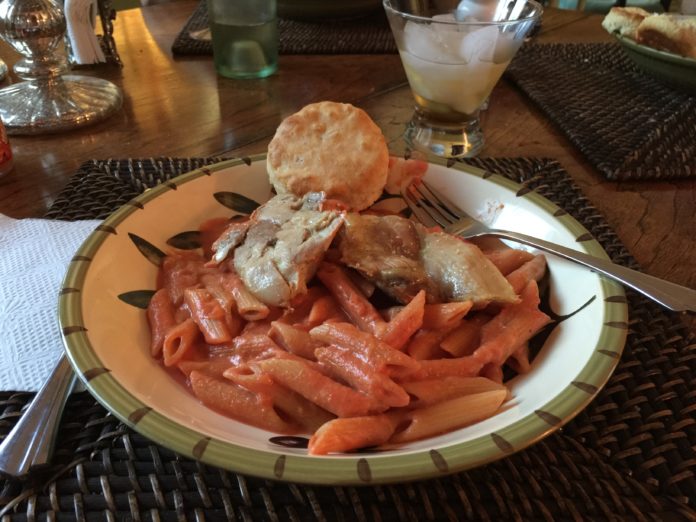 I am trying to cook something every week, so this week I decided to go with a little Italian flair and make some great pasta. Of course, there were plenty of issues as always.

My mom had eye surgery yesterday morning so I went and made dinner for my parents and made enough for all of us. I found a couple of different recipes and combined a few things here and there to make the recipe I ended up using. Of course, I had to make a few changes along the way and I screwed some stuff up.

The biggest change I had to make was using wine instead of vodka. I know that doesn’t make any sense since vodka is a part of the name, but it was the only alcohol my parents had. I have vodka at home, but I didn’t want to drive all the way to my house, then their house just for that. Call me lazy.

I made a quick stop by the grocery store and picked up a few things I needed and went home to start preparing.

So as I mentioned, I used white wine in this sauce. This is the first time I’ve ever made it, so I don’t know how it would have turned out with vodka, but I could tell a hint of the wine in the sauce, so I would recommend vodka if you can use it.

First, go ahead and start boiling a pot of water for the pasta. I waited on this and it made it take longer than I would have liked. The sauce kept fine, but it’s just easier to go ahead and start making the pasta. Once the water is boiling, turn the heat down to medium-low and throw the pasta in and let it cook, stirring occasionally. When it’s cooked to the point where you would want to eat it (sneak you a noodle here and there and test it), then drain the water.

Also, go ahead and chop the onions (if you didn’t buy pre-chopped onions like I usually do). I did use a whole onion this time. You want to use a smaller rather than bigger onion in my opinion, but it’s not the end of the world if you use a bigger onion than what you would classify as “medium”. Also, chop/mince/crush/whatever the garlic. I just put it in a garlic press and went to town.

Then put your olive oil and butter in the sauce pan, and turn it on medium heat. Once the butter has melted, throw in the onions and garlic and stir it all up. Let it sit for a couple of minutes on medium-low heat. You don’t want to burn it like I typically do with things.

After that, pour in your vodka (or other alcohol), and stir it up again. Then let it sit for another 2-3 minutes to reduce it a bit.

Now you can pour in your tomato puree. Many recipes called for only a 14 oz can, but I couldn’t find one in the grocery store so I just used a 28 oz can. It makes a little more sauce, but that doesn’t hurt anything. Pour the can in and mix it up good until it’s all combined. You can use tomato sauce instead of puree, it just makes the sauce a little bit thinner. If you don’t like it really creamy, it might be better.

Now, reduce your heat to low, make sure it’s nothing more than a simmer.

Go ahead and pour in your one cup of heavy cream. This should turn the sauce more of a pinky-orange color like vodka sauce typically looks like. It’s not as healthy with the cream, but I like it better that way as opposed to milk. Just run a few extra laps the next day.

Stir it up until it’s all mixed together, and season it with salt, pepper, and a pinch of red pepper flakes for a little kick. I ended up putting a decent amount of salt/pepper in the mixture, but just season it until you get a good taste.

Stir everything together and make sure it’s good and mixed up. Once it is, grate up about a cup of parmesan cheese. Everything I do says to use “real” parmesan not “fake” parmesan. Whatever that means. I took that to mean, buy a block and grate it yourself. So I just found the first block of cheese with the word “parmesan” on it, and bought it. Take that cup, and pour it in the sauce pan, and mix it in. My cheese got kind of goopy and stuck together, but cheese is cheese, so who really cares?

Once the sauce is ready, turn off the heat to it, get your cooked pasta, and pour it in the sauce pan. Don’t just dump it all in there, do it slowly to make sure you have a good pasta to sauce ratio like you want. Toss the pasta in the sauce pan until the noodles are coated with the sauce.

You’re done! Spoon out however much you want into a bowl, and sprinkle a little more grated parmesan on there if you so desire.

Now then, I bought some chicken to put in the pasta, but ended up just cooking the chicken and putting the whole piece over the pasta. For this, just buy chicken, sprinkle some salt and pepper on it, and stick it in the oven at 400 degrees. There is probably more that you can do, but I’m a simple person.

I also did some biscuits because my mom had some left over. Bread always goes good with pasta, so do what you like.

This recipe made three large bowls of pasta for me and my parents, and probably could do that much more again. I just took one bite of the leftovers when I got home to see what it tastes like, and I think it tastes even better as leftovers, so you can look forward to that.

Now I need to figure out something else I can make. Pasta and soup is kind of all I know to do.