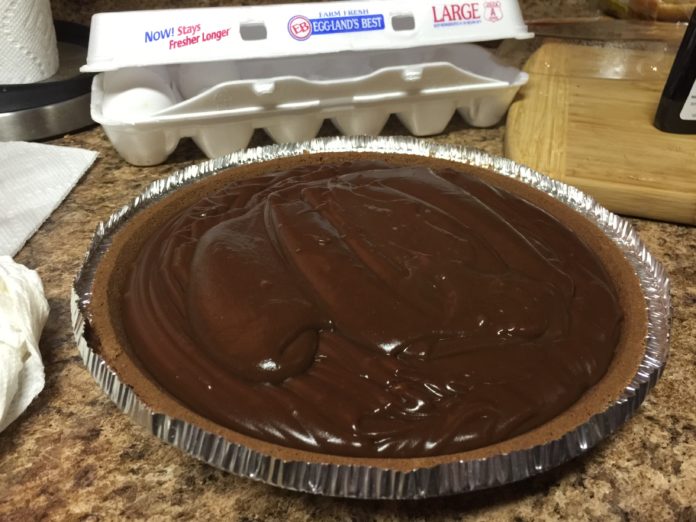 So I’ve done a couple of different types of soup, and I’ve done pasta with made from scratch sauce, so I decided to try my hand at desert. When I was younger, my mom would always buy a chocolate pie from somewhere (I think it was Publix) and I would just destroy it for desert each night after dinner. I wanted to capture a little magic from back then, so I decided to do my own chocolate pie to see how it measured up.

I’ve never baked anything, and my mom told me it was like chemistry. Unfortunately for me, I never once took chemistry in my life, despite it being required in both high school and college. I’m sneaky like that (but please don’t take away my degrees).

I had to go buy a bunch of stuff because I didn’t have any of the typical things you use in deserts like sugar, cornstarch, chocolate, etc. I tried my hand at it, and when I was done, I had created a monstrosity that no human should ever have to eat.

However, after I cooled it and tried it, it turned out to not be that bad. I let my Meltdown cohorts try it and they seemed to like it too (or so they said to at least make me feel good). None of them had an extra slice, so it must not have been that good.

Here is the recipe for it, and how I attempted to make my own dessert.

A pot for everything to cook in, I just used a normal soup pot
Whisk
Two bowls (one for egg yolks, one for the leftover chocolate filling)
One plate (to separate the eggs on)
One plastic water bottle (emptied out)
Cutting board
Knife
Measuring cup
Measuring scoops (I’m not sure what they are called)

Let me first say this – you need some sort of measuring scoop like this. I didn’t have that, and that led to me making all kinds of a mess. The biggest thing you need it for is the cornstarch. I have never used cornstarch in anything, but I just tried to dump it into the measuring cup like I did with the sugar, and it was a HUGE mistake as you can see by the mess in the picture. 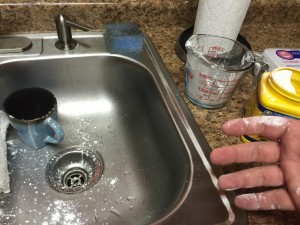 You start the recipe by putting your sugar, cornstarch, and little bit of salt in the pot, and stirring it all up with the whisk. Stir SLOWLY or you will cause a big cloud of cornstarch. I had learned from my mistakes by then, but just a word of warning. The heat should NOT be on at this point.

Before you go any further, make sure you have chopped up the chocolate into fine pieces. It will melt easier that way.

After you have mixed all of the powder together, it’s time to pour in the milk and eggs. You only need the egg yolks, so you will need to separate them from the egg whites. To do this, crack the egg open on a plate. I tried in a bowl and it didn’t work as well, I think a plate works better. Take an empty water bottle that you can squeeze together (I recommend a Dasani bottle), and squeeze it before putting it to the yolk. Then put the opening of the bottle to the yolk, but keep the bottle tilted sideways. Release the pressure on the bottle, and it will suck the yolk up into the bottle. Then squirt it into a small bowl.

Watch this video to see it in action.

Once you’ve put the milk and eggs in the bowl, start stirring it together, and turn the stove on medium heat. This is where I’m not sure if I made a mistake, or if I just read things wrong. Everything I saw said that it would take about 6-8 minutes to start thickening up. You are supposed to stir slowly and constantly until the mixture (which is just liquid mostly from the milk) turns into pretty much pudding. I had the stove on 5 out of 10, which is what I assume is medium heat. I stirred for about 10 minutes, and nothing was happening. I turned the heat up to around 6-7, and kept going at it. Now 15 minutes had passed, and I was wondering what the deal was, it was still as watery as it could be.

I stopped stirring to go look at instructions of what to do again, and when I came back, I noticed it was a little thicker. Literally within one minute, it went from totally watery to thick as pudding. When it finally turns into a pudding like substance, it should start bubbling. When you see the first bubble pop, take the pot off the heat, and turn the stove off.

Now it’s time to add the chocolate. Just dump it all in there. Of course, being myself, I missed the pot with half of the chocolate. Luckily I had some extra I could chop up and throw in there. But be careful when dumping the chocolate in there because when you miss and the chocolate hits the hot stove, you make a terrible mess.

After the chocolate is in, stir it up. Stir and stir and stir like your life depends on it. It will get really thick, but just keep going at it. You can use the same whisk for every step of the process.

Once it’s all stirred up, you’re basically done. One recipe said to throw butter in after you had made the mixture, but that seems stupid. I tried it that way, and the butter didn’t melt that well. I don’t understand doing that after you’ve done everything. Seems like you are adding butter just for butter’s sake. I don’t need more butter in my body, that’s for darn sure.

So when the mixture is complete, take your favorite pie crust, and dump it in. I won’t tell you how to do anything with a pie crust other than just buy a pre-done one and take the plastic off it. There were a few different options, but I bought a chocolate pre-done crust from Keebler. It’s probably the best part of the pie.

You will have more filling than the crust will allow for, so since this is basically chocolate pudding, just pour the rest in a cup or a bowl and eat it. Treat yourself.

When you’ve poured enough into the crust, try to smooth it out a bit to make sure it’s actually filled up, and then stick it in the refrigerator. The filling needs to cool and harden a bit before you serve it, or it won’t actually serve. After about 3-4 hours, it should be ready to go. I made it on a Friday night and didn’t serve it until Saturday night, so it spent practically all day in the fridge. There is no problem with that.

My first two test subjects were Tim Melton and Aaron Daniel, my two Meltdown partners. Here is what they had to say:

So there you have it. It’s clearly a winner. To thank them for being my guinea pigs, here is a bonus video of Aaron doing strange things in my house, like trying to outsmart the motion detector attached to my alarm system.

When I tasted it right after I finished, I thought it was terrible. I will admit, I have eaten a couple of pieces after it cooled down and turned into a pie, and I do actually like it. It is a little rich. I’m curious what it would be like to use something different than bittersweet chocolate.

However, I will not bake anything for a long time to come. I’m going back to normal food. The next adventure I want to try is making my own pizza from scratch. I don’t know if I’m up to making dough quite yet, so I’ll probably go get one of the fresh balls of dough that Publix makes. Then I’ll make my own sauce and go from there. We’ll see what happens.