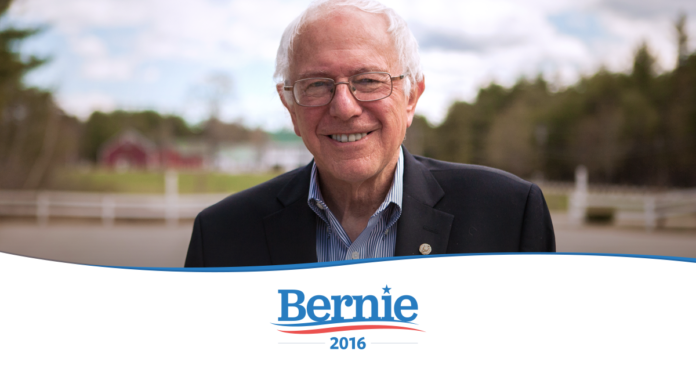 On the heels of the democratic debate (that I’ll admit I barely watched), I thought I’d write why I’m voting for Bernie Sanders. I didn’t pay a ton of attention to the debate because I already knew I was voting for Bernie, I didn’t have to be swayed one way or the other. The only reason I watched any of the Republican debates before this was simply to see how hilariously stupid Donald Trump could be. They have been more of stand-up comedy acts than debates…for more reasons than Trump.

It’s always been hard to be a liberally minded person in the state of Alabama. Most of my closest friends typically side with me in our political views, but we are definitely in the minority here.

I think growing up during the Clinton administration is part of what made me feel the way I do about politics. I don’t care what people say about his personal life and the issues he “may or may not have had” there, but he did a good job running this country, and he did so while I was still a young child who was learning their way through the world.

I was raised in a Methodist household with one parent who leans right and the other who leans left. I’d say I had a very “down the middle” education when it comes to religion, politics, and pretty much everything I could learn about in the world.

So here we are in 2015, getting ready for what will likely be the most important election in history. I don’t know if Donald Trump can win, and I don’t know if Bernie Sanders can win.

None of that matters.

As an American citizen who has always followed the rules and never ended up a felon, I have a vote for president. It’s only one vote of millions that get cast each presidential election, but it’s MY vote. No one can tell me what to do with it. I can choose to not even use it if I don’t want to. Some may say that’s un-American, well I say it’s as American as it gets to have the right to choose not to vote.

But I am going to vote this election.

I’ve been eligible to vote for the last two presidential elections. In 2008, I would have voted for Obama, but was overseas in Germany for the World Cyber Games Grand Final (basically the Olympics of video games). I didn’t get an absentee ballot because I didn’t qualify for the trip until a few weeks before and wasn’t sure if I’d need it. In 2012, I voted for Barack Obama. Big surprise.

So this will be the third time for me. As we near the primaries, I’ve started to think about what I wanted to do. In the last two primaries, I voted for a Republican candidate. I was content with whichever candidate won the Democratic nomination, whether it was Barack or Hillary or Joe Biden. Biden was actually my first choice.

The reason I voted in the Republican primary was to try and choose “the best case scenario” should the Republican candidate win it all. Basically – who would cause the least damage should they get elected. So I took my single vote, and threw it at the candidate that I thought was the least of all evils.

This year, I’m not doing that.

In an primary full of people who would be dreadful presidents – people like Chris Christie, Mike Huckabee, Ted Cruz, and yes, even The Donald – I’ve changed my philosophy on how I will use my one, small primary vote. If I did vote for a Republican, it would be Jeb Bush.

But when the primary makes it way to Alabama, I’ll be casting my single vote for Bernie Sanders.

People say Hillary “won” the debate. That is people’s opinion, there is no actual winner or loser. If the election was decided by debates alone, things would be way different than they are.

Side note: they should do the debate Around the Horn style with points and mute buttons.

So Bernie isn’t a good debater, so what? That’s not going to change my opinion of him.

I’m voting for Bernie for many reasons, but I’m not writing this to say I am only doing it because I agree with his position on the issues over others. While that is generally true, I am mostly voting for him because of who Bernie Sanders actually is.

I’m voting for the guy who is not using a Super PAC.

I’m voting for the guy who is embracing social media better than anyone in this election to reach the largest generation ever.

I’m voting for the guy who, even after being run off his own stage by a Black Lives Matter protest, shows that black lives matter because all lives matter.

I’m voting for the guy who, over 40 years ago, wanted to abolish laws that regulated human behavior and imposed a particular brand of morality on people – whether that was homosexuality, abortion, drugs, etc.

I’m voting for the guy who, despite being 74 years old, is the most advanced and free thinking of all the candidates.

I’m voting for the guy who understands that people are people. It doesn’t matter who we are after that.

And more than anything, I am voting for Bernie Sanders because the media doesn’t believe he can win.

I get one vote. No more, no less. Bernie Sanders can’t win if people are swayed to believe he won’t win, therefore they vote for someone else.