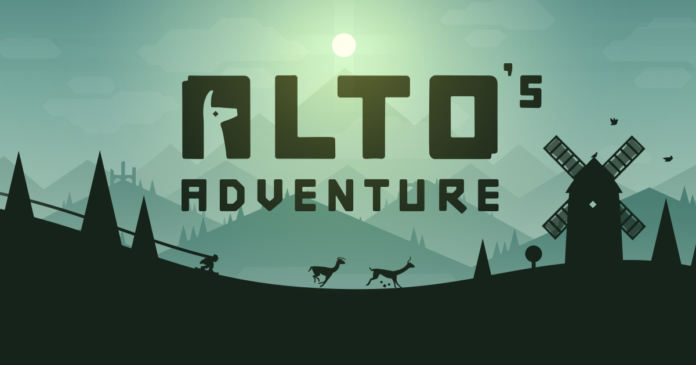 I’m always on the quest to find the next big game that will help me kill time on my iPhone. A couple of weeks ago I found my next mobile obsession in Alto’s Adventure.

Alto’s Adventure is an endless running snowboarding game that kind of reminded me of Tiny Wings to an extent, but it’s really a very unique game in it’s own right. The concept behind the game isn’t that original, but it’s execution is flawless unlike any other game of it’s kind.

You start with a character named Alto who is trying to herd his llamas back home, and he has to snowboard down a hill to do so. The concept is really only there to give a reason why you are snowboarding down an endless hill, and doesn’t have a ton to do with the game other than when you get a llama, you get some points.

You are given three objectives to start with at level one. Once you complete those three objectives, you level up and are given three new tasks. After you progress a certain number of levels, you unlock new characters. These new characters have different skill sets that you can use to accomplish your objectives for each particular level. For instance one might flip faster, but is slower. Another might have a better boost after performing a trick, but flips slower.

It’s not really about how you play the game, but rather the fact that the game functions well and looks absolutely gorgeous. Imagine if Monument Valley was an endless runner instead of a puzzle game. While playing for a prolonged period of time, you will eventually watch the sun go down and start playing at night time. Sometimes it will rain, sometimes it will snow. At night, or int he elements it’s obviously harder to see things than it is in the daytime while it’s sunny, but that adds to the fun.

The good thing about this game is that you can play for a minute, or for an hour. The other good thing is that there are no microtransactions. The game does cost $1.99 to begin with, but it’s well worth the price.

If you are looking for a game, check this one out, you won’t regret it.

Alto's Adventure is a graphically beautiful game with simple controls that will keep you playing for a long time to come.