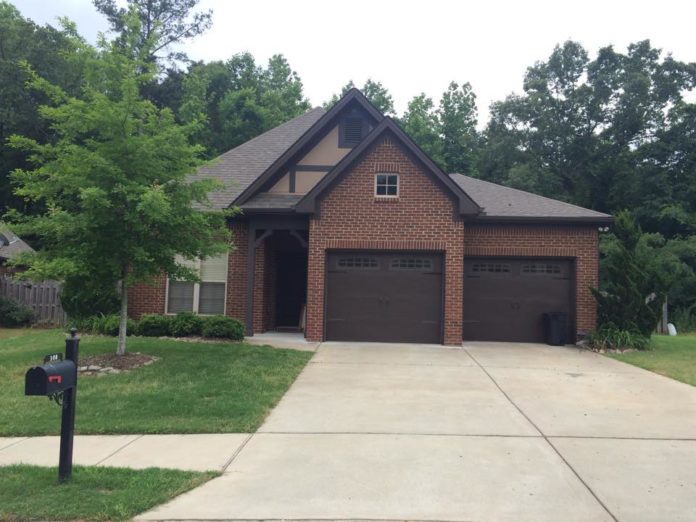 As if I haven’t said it enough over the last few days, I bought a house! I decided to take some pictures this morning and share them.

The house has three bedrooms. The master bedroom is just the bedroom, but I also have names for the others – the “War Room” and the “Patriot Room”.

The “War Room” is my office. I’ve got my desk in there with my whole computer/studio set up. I’ve also got a TV with my Xbox One, Xbox 360, and Nintendo Wii U hooked to it. Then I also have a piano in there, along with all of my guitars.

Basically anything I want to do, I can do in this room. I can relax and watch TV, I can play video games, I can play the piano or guitar, I can record stuff – it’s my do anything room. Just out the door of the room you can turn left to go in to the dining area or you can go straight out the back door.

Coming from a one bedroom apartment, I didn’t have anything to really fill up another bedroom. I had office stuff I could separate out into one bedroom, but that third bedroom would be pretty much empty. So this is where all of the stuff that came from my parent’s house went. It’s basically a room full of memories from when I was in high school (and a little bit before and after).

The rug on the floor is one I won in a silent auction at church a couple of months back. I’m 100% sure it’s a New England Patriots rug, but oh well. The case on the right in the picture is full of die cast cars I have collected over the years, most of them via my grandfather (and the case via him as well). It actually lights up, but I forgot to turn it on before taking the picture.

The pictures on the wall in the background are all autographs from famous athletes – Barry Bonds, Emmitt Smith, Kenny Bernstein, Bobby Allison, among others. There are other ones not pictured like Ron Dayne, Mark Gottfried, Mark McGwire and more. The wall just off screen to the left has my plaques on it, like championship plaques from high school, team plaques from Birmingham-Southern, and some other stuff.

The Patriot helmet lamp was actually made by my uncle. It’s a very crafty thing and fits well in this room. I had it by my bedside for years, but it looked better in here.

This is a good room to come sit in just to have a quick chat. It’s the first room you come to when you walk in the front door so I wanted it to look good. Those two chairs are dubbed “the world’s most uncomfortable chairs” by my dad, but I needed something in there since I didn’t have a second bed. We’ve thrown the idea around of putting a day bed or futon in there, but we’ll see. 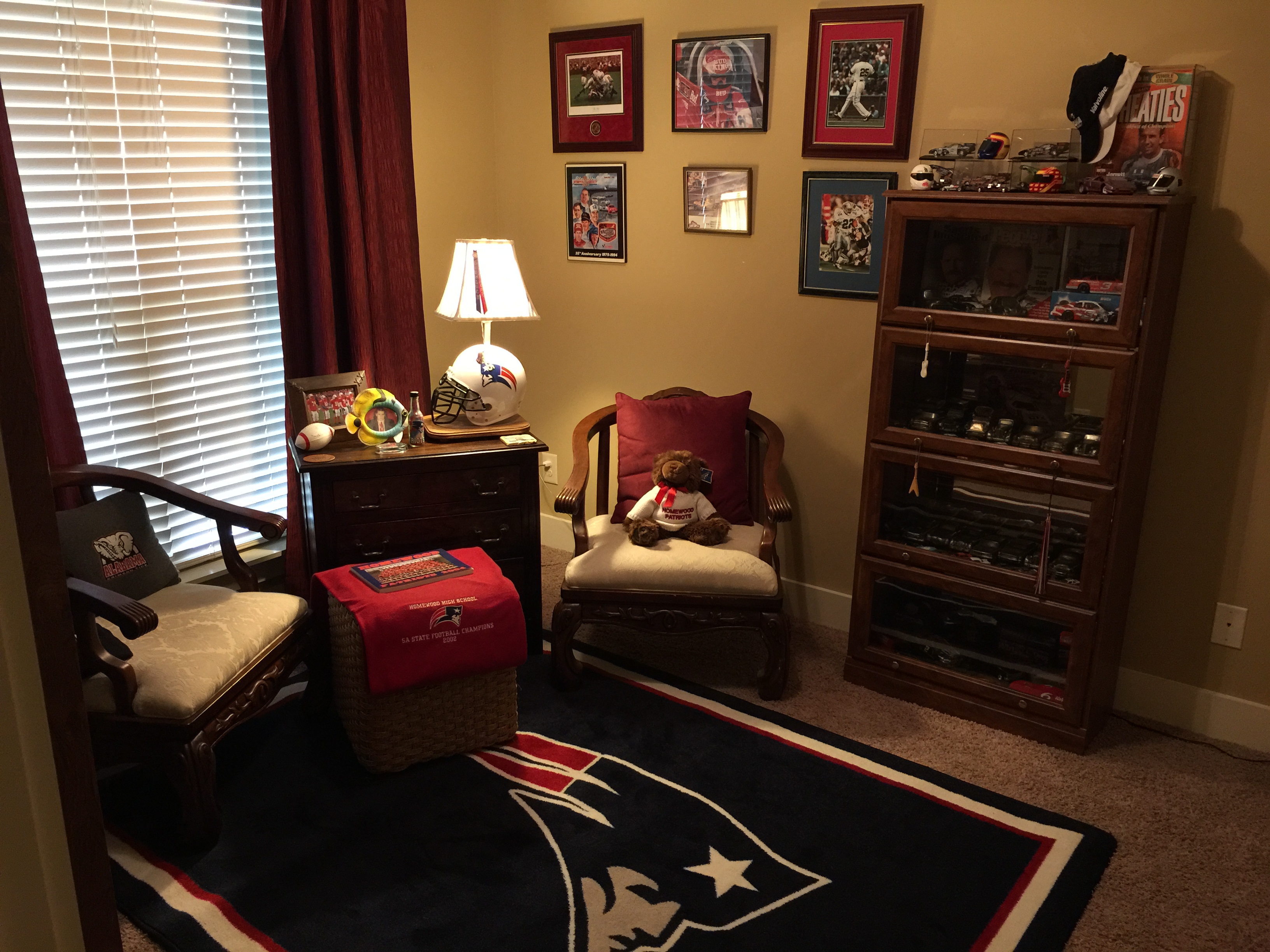 I love this bedroom. It’s not the biggest one we saw in the neighborhood, but it’s close. I have a queen sized bed, but the people who lived there before had a king size with still tons of room to spare.

It’s simple, yet elegant enough. The lamps are from my parent’s den, but they are black and brown striped and fit perfect in this room. The picture of New York above my bed has been above my bed since I first went out on my own as an adult. I think it fits with my black leather headboard well. 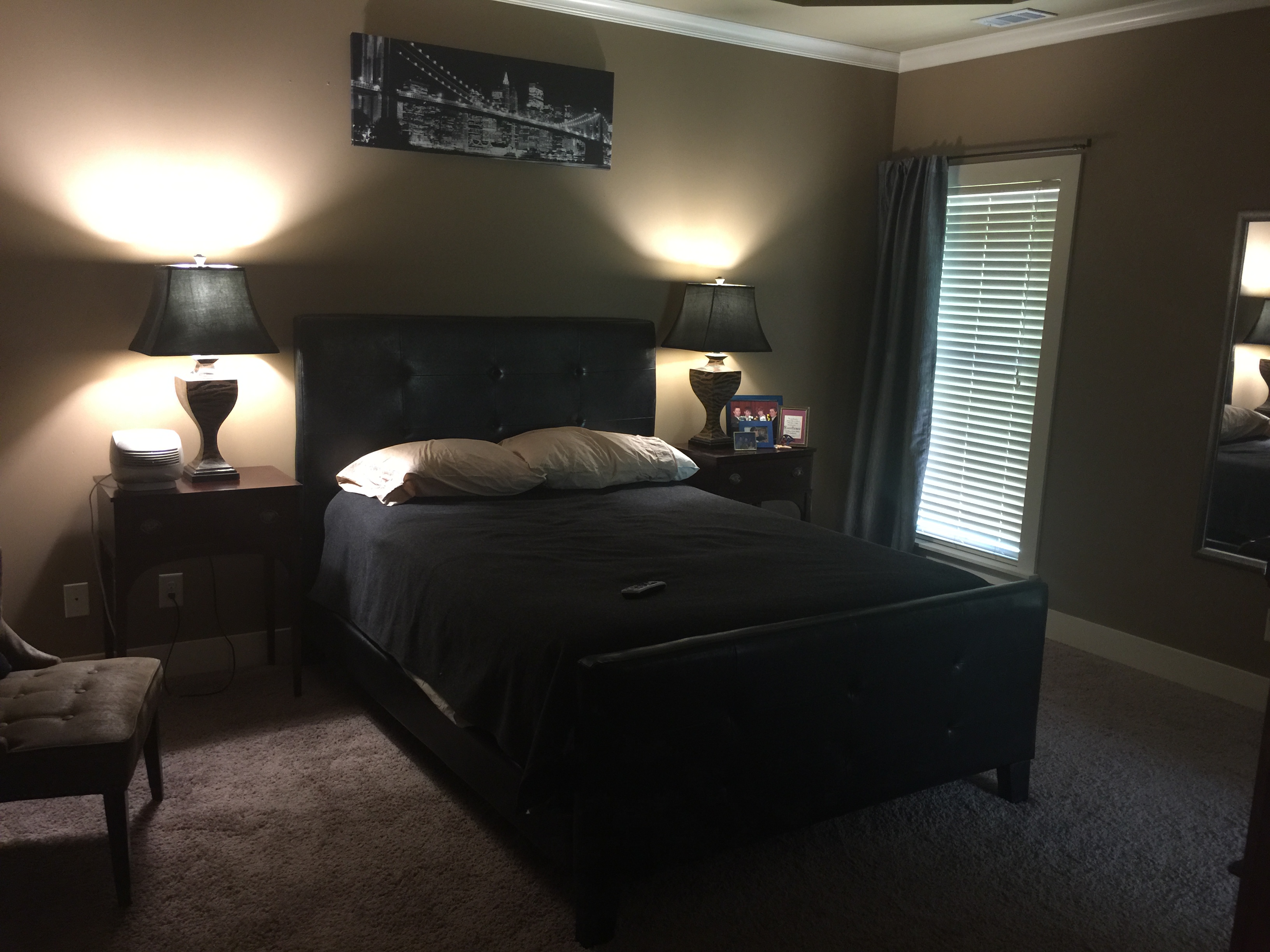 The den has a really high raised ceiling, so the room seems really big. All of the furniture in there is from my last apartment except for the red chair at the bottom. That was my mom’s chair for a number of years in the den at their house. The leather sofa was my parent’s until I moved into my last apartment and they got a new one. I love that thing. They had it forever at home when I was in high school and it was great. It’s the most comfortable sofa ever, and the perfect thing to stretch out on to relax and watch TV.

I got the loveseat when I went off to Alabama the second time. I got an apartment and needed something in there, and it’s stayed with me since. The only real new things are that I took that red chair from my parents, and bought a little end table that the lamp is on in the bottom right. Also the rug is new because I’ve been on carpet for so long.

The two oldest pieces in here are the chest and chair in the far corner. The wooden chest has been mine for as long as I can remember. I used to keep toys and clothes and stuff in there until the bottom fell out. Now there is nothing in there, but it makes a good end table. The small wooden chair was my grandmother’s. I have two of them, and the other is in the war room as another place to sit (but you couldn’t see it in the picture, it was to my side). It’s a great reminder of her and it allows for another place for someone to sit. 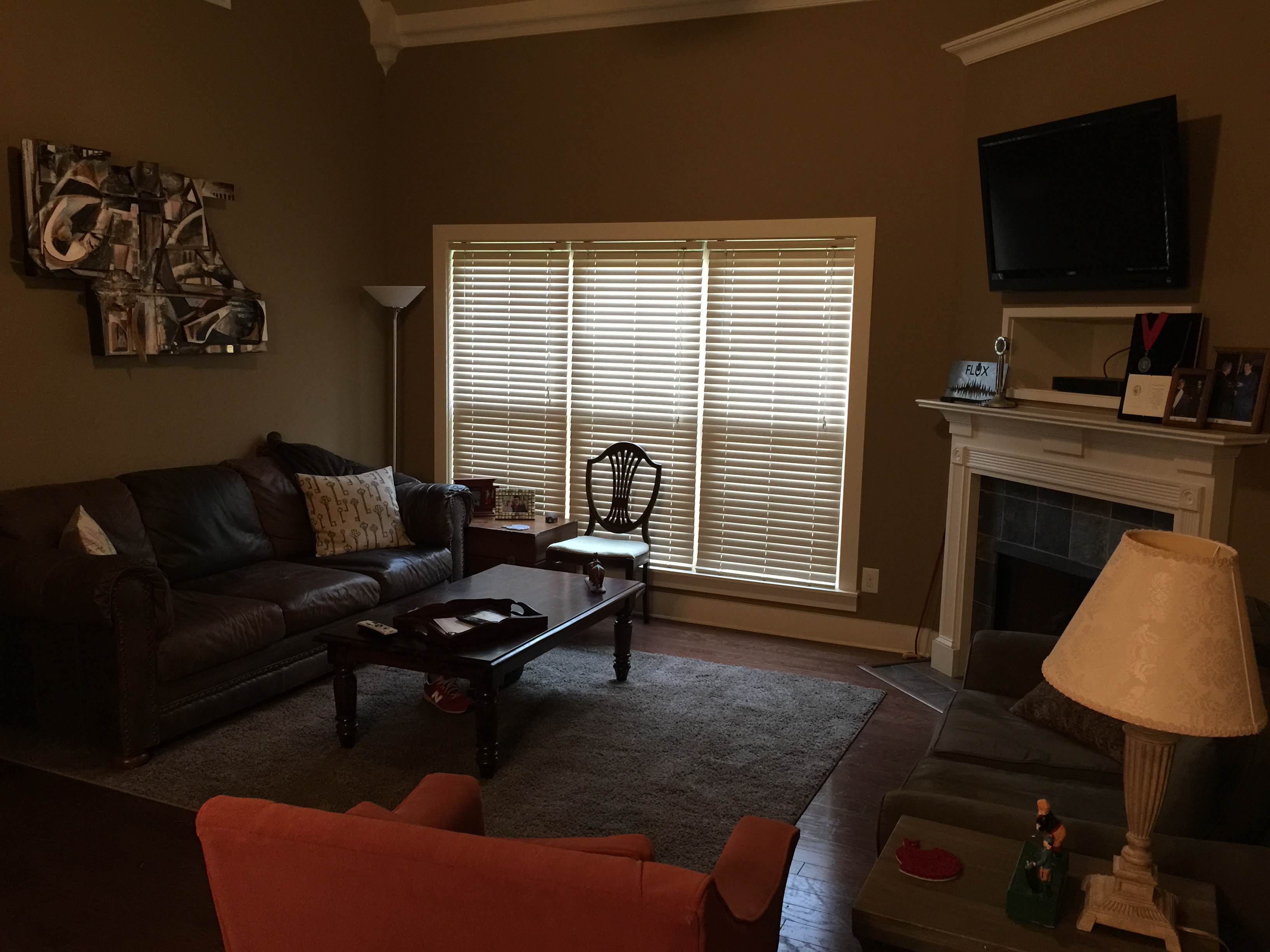 I don’t have my kitchen pictured because other than my fancy refrigerator, there isn’t anything special about it, and it’s actually kind of small. So the last area I’ll show inside the house is the bar and dining area.

I am not a drinker at all. I’ll have the occasional cocktail, but can’t stand beer or wine. That doesn’t stop me from having a little bar set up just in case. We went and bought the black piece that everything is sitting on, and my parents gave me that elephant picture, which is pretty cool in my opinion.

That is on one wall, while the other wall is covered with a few more high school items we couldn’t quite fit in the Patriot Room. The poster is my state championship poster from my senior year when we beat Russellville at the Hoover Met (thanks Hurricane Ivan) in the title game. The four pictures around it are from that game as well, featuring some action shots of me…standing there. For real action shots, you have to go to the Patriot Room or my Facebook page.

The other two areas where there would be walls – one is a bar from the kitchen, so a half wall kind of, and the other is open to the den.

I didn’t take a picture of the table, but it’s a high table with small barstools. You can catch a glimpse in my picture of the soup I made a couple of nights ago.

I didn’t get carried away with pictures here because it was still wet and rainy from a storm last night. Not pictured is around the other side of the house where the previous owner was growing corn. Yes, I said growing corn. He had his own little farm off to the side of the house. It’s nothing now, and I am coming up with a few different ideas for it. It’s a little overgrown, so I’m leaving it out of the pictures for now. I’ll share my progress with that at a later date.

But of the pictures I did take, you can see the majority of the yard. As you can also see – I have a smoker. It was there when I bought the house. I’m not 100% sure what to do with it yet. We might just knock it down. We might try to use it at least once before knocking it down. We also talked about maybe turning it into a fireplace. Regardless, there is a big smoker in my yard if anyone knows how to use it and wants to come try it out. I’m game as long as you let me eat whatever you cook in it.

I probably need some more outdoor furniture, we only bought the furniture I have because I needed something at my first apartment. I’m not even a big fan of it, but I don’t sit outside much anyway.

As you can see in the picture down the side of the house (actually the back), I have some roses planted that were left over from before. So if you want fresh roses, you can come snip some…for a price.

Then the picture with the random post in it – the person before me had a bunch of birdhouses on it. I don’t have even one birdhouse, so I’m not sure what to do with that yet. The reason I even took the picture of the post, wasn’t because of the post, but rather because of the fact that you can kind of see the golf course through the trees. If you look at the top of the post, and just to the right of it, you can kind of see the course and a cart path. So I kind of live on the golf course.

Now I’m just waiting for someone like myself to come playing through and be so bad that they hit a ball in my yard, and I walk out there and see it. No luck yet, but it’s only been a week.

And that’s my house.

I really like it, and I think I’ll be happy in it for years to come. Not pictured was the kitchen (which isn’t that special) and the inside of the garage. Let me describe it for you – there are a couple of boxes in there. That’s it. Also not pictured – the bathrooms. The guest bathroom is kind of a standard bathroom. Mine is anything but standard, but I’m not a big fan of sharing my bathroom. That’s like my personal private space that no one can know about.

I can’t wait to get to work on the farm area because I have some ideas to make it a usable space for me. I don’t think I want to grow anything there, but I might, who knows?