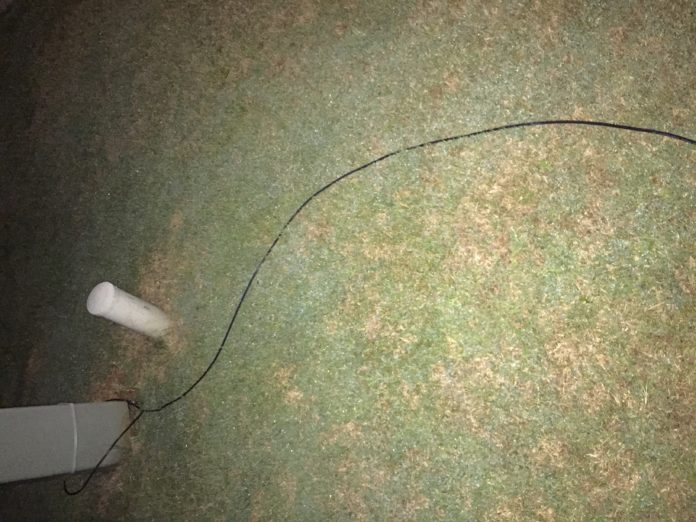 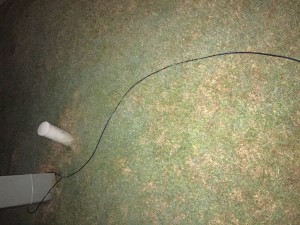 Charlie is a cable.

Charlie wants to go home. However, Charlie needs help going home. Charlie has a beautiful condo under the ground in my front yard. But he has to find some way to get underground. Seeing as he is an infant, he can’t do this on his own.

The company that helped deliver Charlie as a baby typically provides these services to help send newborn baby cables home. Charlie was born under “Company B” supervision. However, Company B couldn’t send Charlie home right after he was born.

“We aren’t authorized to send Charlie home yet,” the Company B spokesperson said on the day Charlie was born.

So Charlie had to wait to go home. He sat there, playing in the grass, frolicking around without a care in the world. Charlie’s handler, Jon, enjoyed watching Charlie play in the grass, but he knew Charlie needed to go home soon so that he could live a happy, fulfilling life.

Company B promised Charlie could go home sometime within the next seven days. They would schedule one last check-up appointment for him, then send him on his way to live in his beautiful underground home. But seven days came and went, and there sat Charlie in the yard, still wanting to go home.

Jon called Company B on behalf of Charlie and asked why Charlie wasn’t allowed to go home, and the unthinkable had happened – Company B had forgotten about Charlie.

In this extra time, Charlie got sick. He started to run a fever and wasn’t feeling good. Jon tried to get Company B to schedule the final check-up soon so he could get looked at and sent home where he could live a healthy life. On Friday May 29, 9 days after Charlie’s birth, Company B promised that they would look at Charlie and send him home the following day, May 30.

Jon called Company B and said, “Hurry, Company B, I think Charlie is dying!”

Company B responded, “We’re so sorry about this, we have an appointment scheduled for June 8 to check on Charlie.”

Jon got furious. “June 8?! Charlie was supposed to go home a few days ago, then they said today. We can’t wait until June 8, he’s DYING!”

Company B, hardly remorseful, said “We can try and see what we can do about Charlie before then, but we can’t send him home until the 8th.”

Jon went out and tended to Charlie for a little while as he remained unresponsive. He waited a couple of hours before calling Company B again to try and move the final appointment up so Charlie could get well again.

When he called back, Company B told him that a spot had just opened up on Monday, June 1. Jon got excited and said to book that appointment. Company B confirmed the appointment and said they would see Jon and Charlie soon.

When Jon went back to tend to Charlie, he was awake! Charlie and Jon conversed for a little bit and then got some well needed rest after a stressful day.

Monday came, and Jon left for work. Before he went, he assured Charlie that his final check-up would be that day and that he would be home before he knew it. Charlie smiled and Jon left.

Later that night, Jon came back to the horror that Charlie was still lying on the grass. Furiously, he dialed Company B. “Charlie needs to go home NOW. Why won’t you just let Charlie go home?”

Company B said, “Oh, we’re sorry, we had a scheduling issue, and Charlie’s go home appointment was actually scheduled for June 9.”

Company B told Jon to calm down. Jon couldn’t calm down, not after what they had put Charlie through.

Company B told Jon they could reschedule his June 9 appointment to Tuesday, June 2. Jon asked one more time just to be sure, “So you’re saying that you will give Charlie his final check-up and send him home finally on Tuesday, June 2, 2015?

When Jon left for work on June 2, he went out and wished Charlie a fond farewell, hoping that he wouldn’t be there when Jon returned home that night. He was tired of saying his goodbyes – he just wanted it to be over.

Update: Jon came home from work on Tuesday, June 2, assured that Charlie would be gone and in his new home living his life on his own now. But when Jon pulled into his own house, he saw Charlie sitting in the yard crying.

Jon tried to calm Charlie, but he knew why Charlie was crying – it was a beautiful day outside, and he had to spend it baking in the sun. Jon immediately got furious and went inside to call Company B and ask for the fourth time what was wrong with them.

Company B said, “Oh we’re sorry, we accidentally scheduled your appointment for June 7. We have you marked down for that, so why don’t we just leave it there for now instead of trying to reschedule.”

“BUT CHARLIE COULD BE DEAD BY THAT POINT,” Jon exclaimed.

“I will have to take Charlie to another company to try and save him if you go back on your word this time,” said Jon, furious at Company B for their lies.

“We understand Jon, we will send Charlie home on June 7th, please trust us.”

Jon didn’t trust Company B, but had no other option.

Update 2: Jon came home on June 3 not expecting anything special. He knew Charlie’s wait would be longer, but hoped he could hang on until then.

But what did Jon find when he came home? Charlie was gone! Where could he be?

Charlie had finally been sent home.

tl;dr – Brighthouse installed my internet two weeks ago, and draped the cable across my yard saying it would need to be buried later. Then they proceeded to goof up my appointments three times and it’s still laying there.

They were supposed to bury it within 7 days of installation but never even scheduled an appointment and forgot – failed.

I rescheduled for this past Saturday and confirmed the appointment, then find out they canceled the the appointment for no reason whatsoever and reschedule it to NEXT Monday by mistake – failed. (also, my internet went out for about 36 hours over the weekend)

So I rescheduled for Monday (yesterday as of this writing), and I get home to find out they had scheduled it for Tuesday, June 9th on accident – FAILED.

Then I rescheduled last night for today and confirmed and double confirmed and triple confirmed. I’m not getting my hopes up. I fully expect to go home and find Charlie the cable still sitting in my yard and find out they scheduled my appointment for like August of 2017 on accident and lied again.

Update: So the cable is still draped across my yard, not to my surprise, and of course I call support and they say they had it written down as June 7, not June 2. I just can’t even…

Get it together Brighthouse.

Update 2: So I told them to leave it at June 7, because when I try to change it around, it never works. So when I showed up at home on Wednesday night, June 3, of course, the line is buried…even though I did NOT have an appointment.