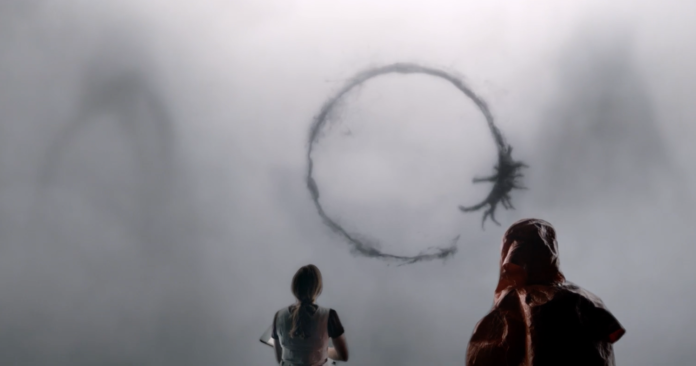 Before I get into this list, here are my current top 10 movies of all time:

I will preface this top 10 list and my favorite movies of the year by saying I haven’t seen a few that I think could crack the list. Those movies are:

Those movies aside, here are the top 10 movies of the year for me:

I feel like I need to see this again to make sure, but this may crack my top five movies of all time. I’m not including in the list above just quite yet, but it will probably replace Interstellar at #10. This movie is so good, and brings up so many ideas that I am still asking questions about and starting discussions about with so many people. It’s a sci-fi movie, but it’s also not a typical sci-fi movie, which is what makes it so great. If you’ve held out on seeing this because you think it’s just another alien movie, please do yourself a favor and see this. If you see only one movie this year – this needs to be it. Hardly any violence, no sex, hardly any bad language. You’ll be talking about it for months to come if you see it.

Last year with Spotlight, I walked out thinking it was a perfect movie. It’s not in my top 10 overall, but for what it was with the subject matter it was covering, the movie could not have been done any better than it was. I feel like this movie is the same way.

It was close between Moonlight and La La Land at #2, but I am leaning toward Moonlight because the moral of the story is something everyone needs to hear. Some people may be turned off by the nature of the movie, with it focusing on homosexuality, but it’s worth seeing for the deeper message. I highly recommend it, and the fact that is a movie that everyone NEEDS to see and at the very least needs to understand the message, that put it ahead of La La Land for me.

I know a lot of people will be turned off by this because it’s a musical and seems like a typical chick flick, but it’s so much more than that. While the actual movie itself is really great, the message in it is great too. Typically, when I go into movies with really high expectations, I end up a little let down. That was not the case here. The only negative I would have is Ryan Gosling’s singing. It just wasn’t exactly on point. I also feel like different songs should be nominated than “City of Stars”, which is sung by him and getting all the original song nominations seems like. We’ll see when Oscar season comes out, but Emma Stone had a great number and John Legend did too.

4. Rogue One: A Star Wars Story

I don’t know that anything will change my top 3. That said, for now, Rogue One is my top movie behind them. I have a few gripes with it, but overall, it was well done, and those issues aren’t going to make me drop it. Part of the reasons I really liked it would be spoilers, so I will leave that out since it’s still new to a lot of people. But this movie was a risk, stepping away from the main trilogies, and it was done very well. We’ll see if the others follow suit.

I wasn’t sure what to make of this originally. Cloverfield, while not in my top ten, is just outside it, and is probably the best monster movie I’ve ever seen. I really like pretty much everything JJ Abrams touches, and I really like the idea behind the whole “Cloververse” that is being created. That said, this movie is nothing like Cloverfield, and it is a psychological thriller instead of a monster horror film. John Goodman was great in it, and I really like John Gallagher too (from The Newsroom, and I’ve seen him on Broadway in American Idiot). I won’t spoil this one, but I’m curious to see how it fits into God Particle, the next film in the series.

Pretty much every Marvel Cinematic Universe film is well done and can make my top 10 of any given year. Doctor Strange is just outside it this year, but still a good movie. Civil War is no different, especially since it’s basically another Avengers movie. Not a ton to say here other than it was well done, and just another great episode in this long epic that Disney/Marvel is giving us.

Most people will scratch their heads at this one, but this is more of a personal pick. I have played World of Warcraft since it first came out in 2004. I played the RTS Warcraft games before that. I am so immersed in the story over the last 15 years or so that seeing it brought to life just made me feel good. Most people didn’t like it, and it’s got a 28% on Rotten Tomatoes. But then again, no one ever likes any video game movies. But this one stayed true to the source material (I’m looking at you Super Mario Brothers), and had amazing CG, and has set up a universe in film that I would love to see explored. If you’ve never played World of Warcraft, you might as well skip it because you’ll probably just come out confused. But if you’ve played anything Warcraft related at all, it’s worth checking out.

As good as Warcraft was with their CG, the Jungle Book was even better. The best part of The Jungle Book is that everything was CG, except the couple of humans in it. The voice work was really well done by a great cast of actors. My only complaint was that they just randomly stuck a couple of the popular songs from the cartoon in there, and they weren’t super well done. Still, a great movie, and worth seeing for all ages.

This was a good movie, but it was just missing…something. I’m not sure what it was. Chris Pine was good, Jeff Bridges is almost always good, and the cinematography and setting was good. I don’t know, it was just missing something. But what was there, was definitely good. I imagine it will get a few Oscar nods.

I know this is a documentary, but I’m going to put it up here. I think it is good enough to belong here. This is documentary about Anthony Weiner’s run for Mayor in New York City following all of his scandals while in congress, then while running for Mayor, even more comes out and it shows all that he has to go through with his wife and Hillary Clinton aide Huma Abedin. It’s a very good fly on the wall documentary film and I’m honestly surprised they got some of the stuff they did, which makes it that much better.

Those are all great movies I saw this year, but there were some stinkers this year too. Here are the worst movies of the year:

The Nice Guys – I know this actually got rave reviews and a lot of people said it was one of, if not their favorite movie of the year, but I thought it was dumb and not at all funny.

Batman vs. Superman: Dawn of Justice – This wasn’t as bad as Suicide Squad, but with what Marvel is offering, DC just can’t keep up.

The Divergent Series: Allegiant – This movie’s CG is terrible…and it’s a movie that lives on CG with what it’s about. You know it’s bad when you’re making a series of movies, and it gets so bad, you have to make the last one a made for TV film (or at least that’s what they are talking about doing). The first one wasn’t terrible, the second was eh, and this was just dreadful.

Fantastic Beasts and Where to Find Them – I’ll admit, I fell asleep a couple of times during this movie, but it just drug out so long. It’s like they are making it painfully obvious that they are stretching this story out to multiple films. It was supposed to be a trilogy at first, and now it’s up to five movies. They should have just left Harry Potter as it was, and quit making all these extra stories.

Then there are a ton of movies in the middle. Ones that were just…ok. Movies that might have been entertaining enough, but didn’t leave a lasting impression on me or were just worth the $10-15 I spent to see it, and I never care to necessarily see it again. Movies like Independence Day: Resurgence, London Has Fallen, Gods of Egypt, etc. Those movies that were a fun ride while you watched it, and it didn’t need a great story because it looked good, had big explosions, and was good enough for one watch.

With all of that said, here are the movies I’m most looking forward to for 2017 (trailers, if out are the link on the name of the movie):

1. Guardians of the Galaxy, Volume 2 – The first one is my favorite MCU movie so far, and the second looks amazing.

2. Star Wars: Episode VIII – Star Wars is going to be at or near the top of the list every year.

4. The Fate of the Furious – I’ve loved the whole franchise, but this looks like it’s taking a weird turn. Not sure if I like where it’s going, but I’m still looking forward to seeing where it does actually go.

5. Valerian and the City of a Thousand Planets – I absolutely loved The Fifth Element, and this is the new science fiction film from Luc Besson.

6. Kong: Skull Island – I liked Godzilla, and Kong looks like it could be good to help set up the Kong/Godzilla universe. Plus a lot of good actors in this one

8. Dunkirk – This is probably a bit low for where I would have imagined before I wrote it all out, but this is about where it ranks with the other movies. Nolan always does great work.

9. God Particle – Can’t wait to see the next chapter in the Cloververse.

10. Thor: Ragnarok – MCU movies are always good, and now Thor has The Hulk and Doctor Strange with him.

11. The Circle – When they first started making this, I looked into the book and it seemed intriguing. The trailer continues that intrigue.

13. Justice League – The only film that can save DC at this point. So it better be good.

14. Ghost in the Shell – Never watched the anime, but it always looked intriguing.

15. Pirates of the Caribbean: Dead Men Tell No Tales – Going to be good to see Orlando Bloom back, but hopefully this is better than the last one.

16. Cars 3 – After seeing the teaser trailer and how serious it was, I’m curious to see a real trailer. I can’t imagine Pixar actually goes really dark, but we’ll see. There is supposed to be a big trailer reveal during the college football national championship, so we’ll see.

17. Jumanji – A great movie from my childhood, we’ll see what the new one brings.

18. Spider-Man: Homecoming – Just not that thrilled for this for whatever reason, but I’m glad Spider-Man is part of the MCU now.

19. The Dark Tower – The book was good, so I’m looking forward to seeing the film adaptation.