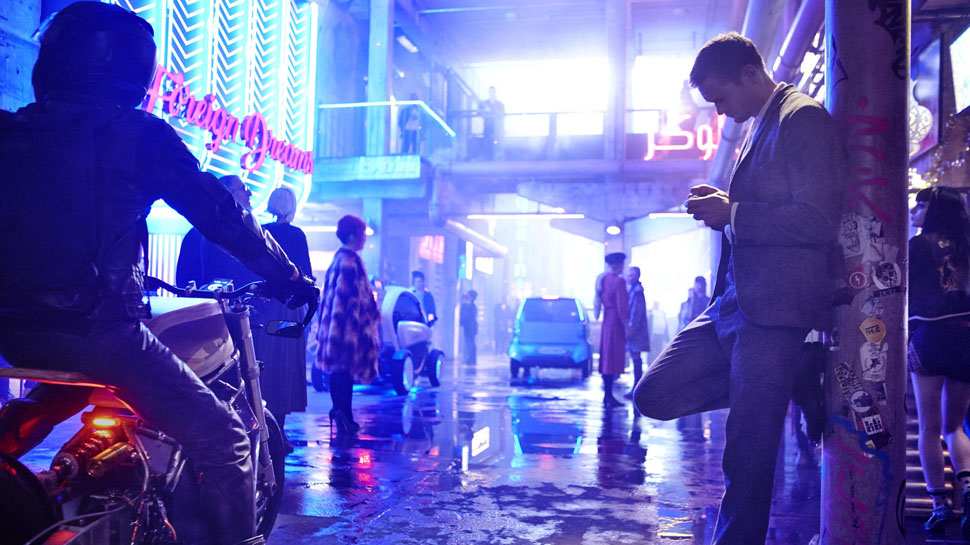 One of my favorite movies of last year was Blade Runner 2049. This year, one of the TV shows I’ve enjoyed the most is Altered Carbon. Mute follows in the footsteps of these ideas and tries to capitalize on the recent trend of futuristic, neo-noir productions. While the ideas are there, the execution isn’t and the story suffers because of it.

The only Duncan Jones film I’ve been able to see is Warcraft. As an avid player since day one of World of Warcraft, I was excited to see it brought to life on the big screen. I thought the adaptation was good, but it was made to where if you didn’t already know all of the lore, I could see how you would get lost and not enjoy the film. Critically, it bombed just like Mute has. I’ve heard good things about Moon, and this is supposedly a spiritual successor to that film. Sam Rockwell even makes a cameo as his character from that movie.

The cast of this movie isn’t too bad. I’m a big fan of Paul Rudd and Justin Theroux, and the little bit I’ve seen of Alexander Skarsgård has been pretty good. However, everyone feels out of place in this futuristic Blade Runner-esque world. The setting can’t decide if it wants to be futuristic, modern, or some mix in between that ends up looking like the future we’d expect to see in a movie from 1980. Skarsgård’s character at one point is given a “simple” phone from his girlfriend that looks like a handheld computer from 1992, literally every cell phone that exists in today’s world is more “futuristic” than the one he uses.

The plot follows Leo (Skarsgård) who is working as a mute bartender at a night club in Berlin. His neck is badly injured in a boating accident that we see at the beginning of the film. He is from a devout Amish family and his mother refuses surgery on his injury which leads to him losing his voice. He dates a waitress named Naadirah (Seyneb Saleh) and the story is both completely about her, yet not about her at all. They also abandon the Amish storyline for the most part other than the way Leo dresses.

The problem with the story is that it’s actually more about mob surgeons Cactus Bill (Rudd) and Duck (Theroux) more than it is Leo who is the titular character. The movie can’t decide which character it actually wants to be about. The story partly follows Leo after Naadirah goes missing, and partly follows Bill wanting to get a passport to go home to America (and the various shenanigans he gets in to with his best friend and fellow surgeon Duck). Of course, Leo’s path keep crossing with the surgeons, and we learn why about halfway though the movie while also learning about dark secrets about the characters along the way.

The film looks decent visually, although there are a few moments here and there where the CGI fails to deliver. The movie doesn’t try to overuse futuristic technology in it’s plot and leaves it to just the scenery, which I respect, but when it does integrate the tech into the plot, it sometimes falls short. The score is great, with Clint Mansell (Requiem for a Dream, Black Swan, The Fountain) sampling some excerpts from the late David Bowie, who is Duncan Jones’ father. The film is dedicated to David Jones (Bowie) and Marion Skene, Duncan’s nanny after his father divorced.

The biggest problem with this film is that the pieces are there. However, the execution isn’t and the film can’t really tell what it wants to be. This is a movie that I’m glad was made to give another original idea to Netflix, but will ultimately continue the downward trend for most critics of what the streaming service offers.

The Cloverfield Paradox and Bright were the last two big movies that Netflix released, and both were unique in their own way and hated by critics. People seem to forget Mudbound, which was one of my favorite movies of last year and well received by critics (even earning multiple Oscar nominations), The Meyerowitz Stories (New and Selected), Gerald’s Game, First They Killed My Father, and Okja among others that were all fairly well received.

Mute is near the bottom of the list when it comes to Netflix distributed original films. Duncan Jones took a risk by producing a passion project of his, and we get why it was important to him at the end. Still, despite swinging for the fences, this is mostly a strikeout.

And if you’re looking to quench your Blade Runner thirst on Netflix, watch Altered Carbon.