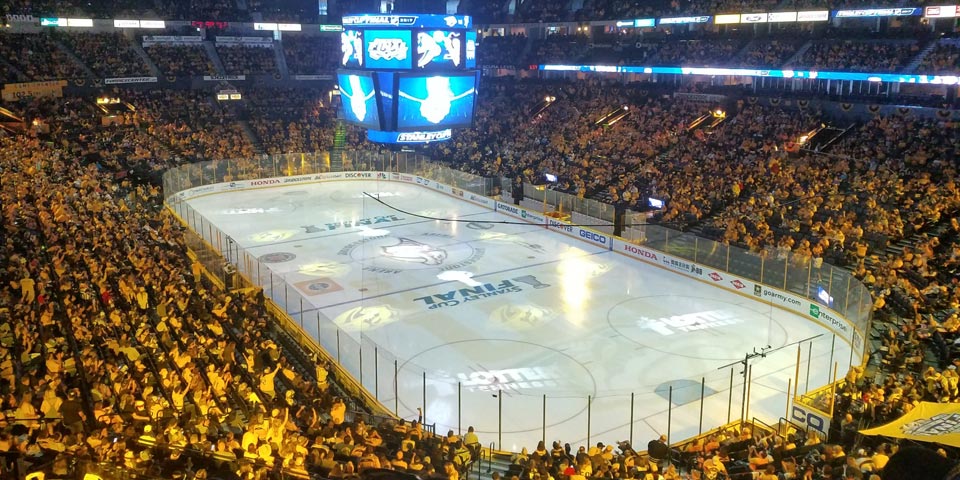 While we all continue to count down the days to football season, there are still plenty of other sporting events to keep our eye on throughout the months we have to wait. May is a month that features plenty of big one-time events including the Indy 500, Kentucky Derby and the playoffs of both the NHL and NBA.

Cinco de Mayo on Broadway in Nashville. Do I have to say more? The crowd will be INSANE in Nashville as the Preds come back home with home ice advantage after a 2-1 win last night in Winnipeg to tie the series 2-2. Nashville looked in trouble early on in this series after they lost game one at home, but now the crowd is going to be insane. The street will be filled with Preds fans and tons of people going to the many bars and restaurants on Broadway.

The hockey that is being played in the second round is phenomenal. Here are the series right now:

We are only into game 4/5 and every single one of the eight teams has already won a road game. All of the series are extremely close and I could legitimately see any of the teams winning it all at this point. The odds have been crazy so far. Here were the odds of the eight teams left before these series began and the movement of each through this round:

Vegas can’t decide who the actual favorites are, including their own hometown team going from tied for first to not even in the top 4 even though they still have home ice!

It’s fun to watch, and I want to be a part of it. There is no better place than Nashville to do it.

I could actually choose tonight, Saturday at noon or Sunday at noon, but I went with the night game tonight so I can enjoy a weekend in NYC after the game. It’s too bad I had to stick to this weekend because the Red Sox come to town on Tuesday.

I’m almost always going to choose any event in New York City over anything else. For those that don’t know, I’m obsessed with New York City, and am going to live there one day. I went to Rutgers for a semester and spent all my free time in Manhattan. When I was competing in video games back in the day, I would go to NYC for events multiple times a year and eventually got a job working with the company that ran many of the tournaments and that had me going and coming from New York all the time.

The game itself isn’t too bad as Cleveland is in first place in their division and are not far removed from a World Series appearance. I like Terry Francona since he won the Red Sox a pair of World Series. Plus, I’ve been to old Yankee Stadium for games before but I haven’t been to the new one yet, and I could see Aaron Judge and all the big names for the Yankees in person.

I’d probably try to go to a play Saturday night and the rest of the time I’d just wander around. I love just picking a starting point and walking around until I find something interesting to do. It’s not hard to find something to do in a city like New York, but I like to take the approach of not planning and just letting whatever happen.

A lot of people won’t know what I’m talking about here, but this is a gaming event that is ongoing with Blizzard’s latest IP Overwatch. They are in the midst of the first ever season of the Overwatch League, one of the largest gaming leagues in the world, and there are four stages within the first season. The playoffs for the third stage are this weekend (along with the end of the regular portion of stage three).

When the Overwatch League (OWL) started, I jumped on the Boston Uprising bandwagon. The team is owned by Robert Kraft (yes, owner of the New England Patriots) and the leader of the team (essentially the GM) is a former Starcraft player that I used to really like watching named Chris Loranger who played for an American team called Evil Geniuses at one point.

This is the first time we’ve seen a franchised league that has been somewhat successful, and they play in a really cool studio out in Los Angeles called Blizzard Arena that is a part of the NBC Universal Studios in Burbank, CA. The only other time we’ve seen a franchised league was the Championship Gaming Series and it didn’t last long. So I would love to see this in person should it go away soon also (but I doubt it will).

It would be awesome to go to Los Angeles and spend a weekend watching a game I casually play but always enjoy watching. It also helps that the team I put my support behind is currently the best team (even though they are #2 in the overall standings they are undefeated this stage). I’ve spent many weekends in Los Angeles/Hollywood for gaming events and I’ve always had a blast. Great food, it’s fun to walk the streets of LA and I’d say I could go to a Lakers/Clippers game, but… Maybe the Dodgers.

If you want to get into esports, the Overwatch League is a good place to jump into. There are 12 franchises that you can get behind:

This is something I want to do before I die, but it’s not near the top of my bucket list. There are plenty of other yearly events I’d rather go to first. I just feel like it wouldn’t be something I would enjoy. The race itself and betting on it would be fun, but I can do that from the comfort of my own home without ever having to put pants on, and that is exactly what I’ll do this weekend.

The overall day is full of hobnobbing with the rest of the wealthy people that come to the event. It’s all about enjoying mint juleps and getting dressed all fancy to show off. I don’t hate dressing fancy, but wearing no pants is always better than wearing any kind of pants in my opinion, and I don’t drink so I’m out on the mint juleps. The Kentucky Derby website says that over 150,000 people come to the track. That’s almost as bad as Talladega but Churchill Downs is much smaller. I can’t imagine what it’s like to just be a regular Joe trying to walk around compared to the rich owners that get special treatment. It must be a nightmare.

The only thing I care about is the race itself and that will be a couple of minutes of satisfaction after a day of hell trying to find your way around, dealing with the people and trying to make bets and potentially collect on those bets. It would be fun to bet on the other races too, but I feel like a lot of people wouldn’t necessarily care about those races. I’m not sure if most people pay attention to the races before or not.

Also, I typically try to do some research and make educated guesses on who I want to pick. I’m still almost always wrong. So this year I decided to just pick three names I liked best and choose them before I looked at the odds. Here’s what I ended up with (odds as of the Kentucky Derby site at 2:00 pm on Friday):

Mendelssohn (5-1) – It’s like Ben Mendelsohn from Ready Player One, Rogue One, Dark Knight Rises and more stuff. I got it at 11-2.

I think this is the most intriguing match-up in the best city coming up this weekend. As things shift to the lower seeded town, I have the choice between:

Houston at Utah may be the more intriguing match-up to some people, but unless I’m going skiing, I don’t care to go to Utah.

Toronto at Cleveland would at least give me some LeBron James action, but that series is essentially over and could end up a sweep at this rate even though Cleveland is the lower seed. Plus…it’s in Cleveland, what can I do in Cleveland?

Golden State at New Orleans is going to be a sweep, or close to it, for the Warriors and I hate New Orleans.

So I chose Philly. At least I can get a good cheesesteak while I’m there. Most people probably thought the 76ers were going to win this series going into it and Boston has held strong at home, so I’d like to see what Philly can do at home.

Going to Sydney is on my bucket list. This is a large Counter-Strike event in Sydney. However, I left this off for two reasons:

First, the American teams in this event are gone already so it would be just going to a Counter-Strike event for the heck of it, not to cheer for anyone I care about watching. It’s also not a major so the stakes aren’t as high.