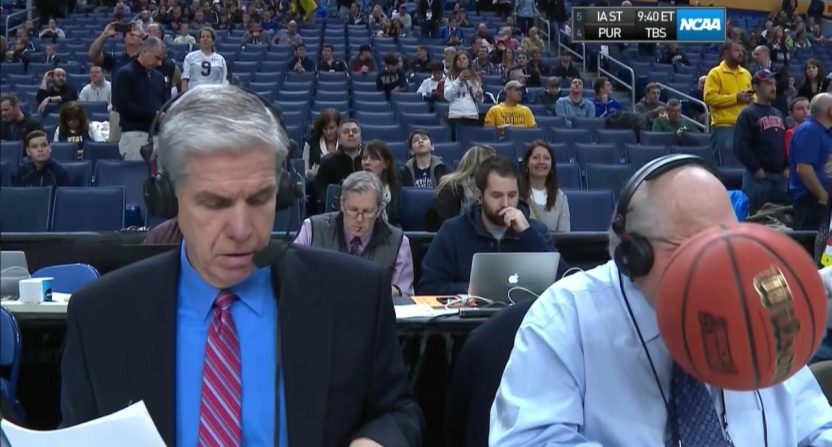 However, I only get five choices, so here we go:

Emrick has won six Emmy Awards for excellence in sports broadcasting and is the only hockey broadcaster to ever be honored with one, much less six. He’s been broadcasting for over 50 years and was the first media member to ever be inducted into the US Hockey Hall of Fame.

He’s worked for basically everyone as the NHL rights have been shopped around – NBC, ESPN, CBS, Fox, MSG, Versus, TNT and more. He does an amazing job of hyping up plays when he needs to and has a way with words despite hockey being such a frantic and fast paced sport. He’s over 70 years old and when he goes away, hockey won’t have anyone that even comes remotely close to the level he is at. I feel like all of the sports have people who can step up and be the “next man up”, but hockey doesn’t. Kenny Albert is probably the best option in the NHL, but he also is in baseball too.

Emrick once told Sports Illustrated, “My role is to be a conduit between the skill of the players and the understanding of the fans. I’m just more or less someone who can describe something, and hopefully with passion.” In a single game he called in last year’s Winter Olympics, he used over 150 different verbs for describing the movement of the puck on the ice. Al Michaels said hockey is the toughest sport to call, and he wishes he could be as good as Doc Emrick (Al Michaels famously called the Miracle on Ice).

To find out more about what makes Emrick the best in sports, watch this story from Real Sports.

While you could easily include Marv Albert here, I’m putting his son Kenny here instead. Kenny is currently the only sportscaster who does play-by-play for all four major professional sports leagues in North America, and there is a reason for that.

He currently one of the top two broadcasters in the NFL on Fox, MLB on Fox and NHL on NBC. He also does play-by-play for the New York Knicks. He is one of the most versatile voices in all of sports. On October 25, 2009, he called the Vikings/Steelers game on Fox, then hosted the Yankees ALCS post-game that night. The following night he broadcast a Rangers game, and then the next night called the New York Knicks season opener. Not many people can do that.

I like his voice, and he knows his stuff. Most recently, he called the first round series for the Predators as they faced the Avalanche. He comes from a great family of announcers, especially his dad, but I actually kind of prefer Kenny to Marv.

Verne almost didn’t make this list because he’s slowly retiring from everything, but so far, he has only actually retired from football. He didn’t call the basketball tournament this year because of back surgery, but he did call the Masters and is planning on still doing basketball and golf for the foreseeable future. So he’s still active as a broadcaster even though we don’t hear him on Saturday’s in the fall anymore.

Verne is a good sportscaster. We make fun of him now and he is the butt of so many jokes when it comes to the SEC. Despite him turning kind of crazy as he got older, he was able to almost incorporate that into his act. If you didn’t like the SEC on CBS pairing of Verne and Gary, then you were probably just an angry fan watching your team lose and you wanted someone to blame. If you’ve ever sat down and listened to Gary Danielson when he talks football with someone on a show like PTI or on the radio, then it’s clear he’s one of the smartest minds in all of college football. Verne calls the largest events in sports each year like the NCAA Tournament and the Masters for a reason. As they became older, they started forgetting words, or mispronouncing things, but it was all a part of their act. If you watched the game like you were listening to Statler and Waldorf call it, it made it so much more enjoyable.

Verne did a good job of making important plays seem important, letting the game breathe and making highlight moments for all of the games and events he calls.

While a lot of what Tirico is doing now is studio or panel hosting, he is just biding his time until he takes over for Al Michaels on Sunday Night Football. He did great in his 10-year run doing play-by-play for Monday Night Football while at ESPN and also did a fairly good job with the NBA, golf and tennis. When he came to NBC, he quickly took over for Notre Dame football on NBC, calling games now for one of the most iconic programs in football.

The biggest reason I like him even more now is that he replaced Bob Costas as primetime host of NBC’s coverage of the Olympics and the NFL studio host. While MNF wasn’t worth watching because of the quality of games for the most part, the pairing of Tirico and Gruden was great. He’s very professional, has a great voice, and is knowledgeable in many sports.

I promise I didn’t put him up here just because he works for the same company (Westwood One is owned by Cumulus). Kevin Harlan is just the greatest radio play-by-play guy that exists today. He calls a multitude of sports for radio, but also does well on TV including calling the NBA on TNT and multiple sports for CBS.

When you call sports on the radio, you have to transport people mentally to the stadium and help them get a picture of what is going on. No one does it better than Harlan. One of the best calls he ever made was when a guy ran on to the field during a Monday Night Football game and he called play-by-play of the guy getting chased by security on the field. It was amazing. You can see it below.

Al Michaels – Although he is a legend in calling the NFL between Monday Night and Sunday Night Football, he has done a lot of other sports including hockey (called the Miracle on Ice in 1980), baseball (called the earthquake-interrupted game 2 of the 1989 World Series) and more. He’s also the only sportscaster I know that was traded, and not only that, but traded for a cartoon rabbit.

Chris Fowler – After becoming a huge name on College Gameday, Fowler now calls the primetime college football game each Saturday for ESPN and there is a reason he was selected to replace the legendary Brent Musberger. He also calls the national title game. On top of football, he has also called the X Games (both winter and summer) as well as horse racing. Most notably, he covers tennis and does a really good job.

Joe Buck – Another versatile announcer who is the main guy in two sports (football and baseball), but his style doesn’t exactly work for me (and I don’t care about baseball anyway). I really like Troy Aikman when it comes to his football pairing.

Marv Albert – I had Kenny on the list, and obviously he learned his craft from Marv, but in recent history he’s been mostly NBA which I don’t watch.