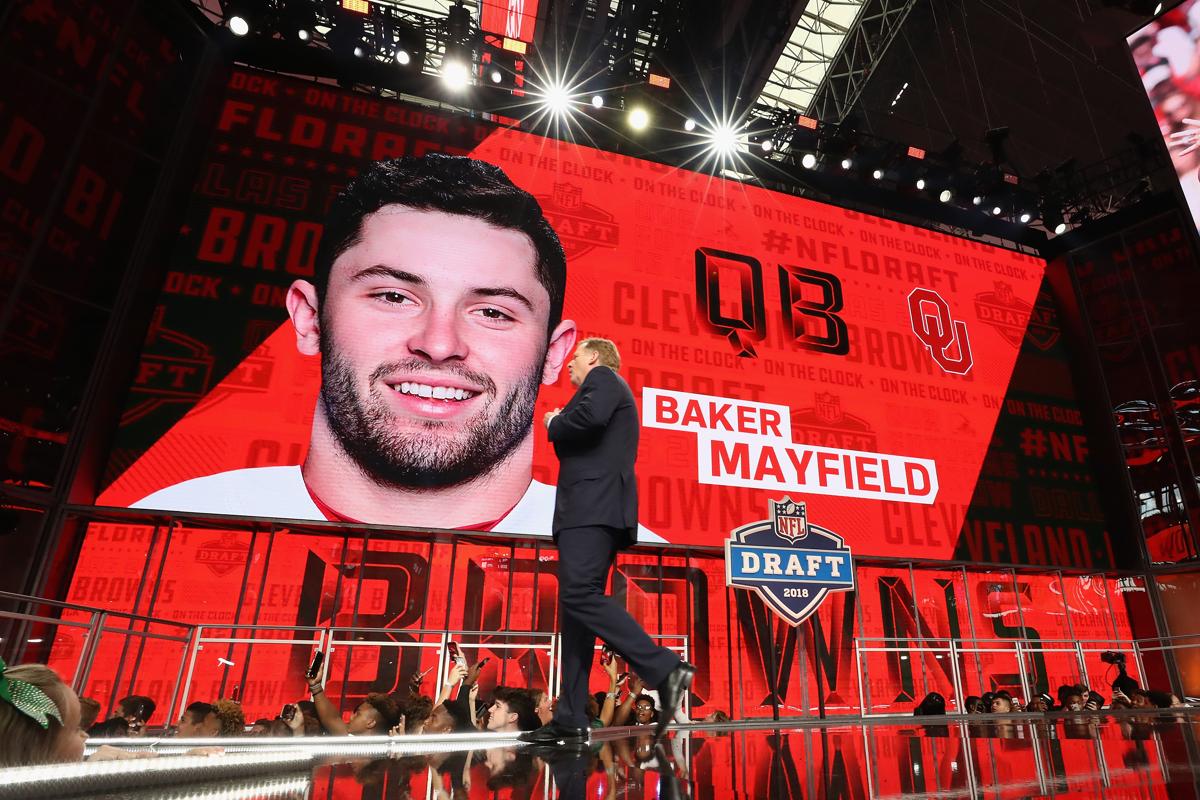 Round one is in the books at the NFL Draft in Dallas. 32 players know their professional destination (at least as of now) and we’ll see where everyone else goes tonight and tomorrow.

The SEC led the way…again, with 10 first round picks. Almost 1/3rd of the players taken were from the SEC. Alabama had four players taken: Minkah Fitzpatrick, Rashaan Evans, Calvin Ridley and Da’Ron Payne. Calvin Ridley fell much lower than I expected him to, but the other players went about where I thought.

So which teams got the best fit moving forward?

The Patriots had a great first round, which you typically don’t see them making a huge splash due to always picking so late. Not only did they get Sony Michel to replace Dion Lewis who went to Tennessee, but they also got Isaiah Wynn, the top guy that blocked for Michel at Georgia.

Michel was part of the two-headed beast at Georgia with Nick Chubb. Some may be surprised that Michel went first, but I think he fits into the system better at New England. Michel rushed for 3,638 yards in his four years, including 1,227 last year, and 33 touchdowns, including 16 last season. He really came on even stronger this past season, showing it was clearly the right choice to come back for his senior year. He’s a bit of a smaller, quicker back than Chubb, but that has been more successful in the NFL lately, and especially for Belichick.

The Bears needed a linebacker, and in my opinion, there was no other option than Smith. He’s not huge, but he was the SEC defensive player of the year for a reason last year, and he led one of the best defenses in college football. If you want someone to be your next Brian Urlacher, look no further.

He’s a natural leader and has great instincts. He’s a smart player who is the kind of guy coaches love and trust to make decisions on the field. He can play from day one, and help make the Bears defense great in a tough division.

It’s nice to see guards appreciated more and more. Nelson is built like a tackle at 6-5, 325 but has been a dominant guard for Notre Dame. Only 11 guards have been selected in the first five picks of the draft, and none since 1985. That shows how special of a player Quenton Nelson is.

This is big news for an offense that has done nothing lately. Andrew Luck is happy, the Colts running backs are happy, and this is the perfect fit for Indianapolis.

Adam Schefter reported last night during the draft that Denver had a deal set up to trade with Buffalo to let them come get Josh Allen, which is what I thought might happen in my mock draft. However, the Browns passed on Chubb and that led Denver to back out of the deal and take the best player on the board.

Some people thought Denver might take a quarterback if they didn’t trade, but they are set with Case Keenum for now apparently. Chubb doesn’t fill a need, but he was a steal and the Denver defense is poised to be a tough one yet again.

We were watching the draft last night before we went to go see Infinity War, and when the picks got in the 20’s, I turned to everyone and said “Lamar Jackson is about to go to one of these teams.” Little did I know that a team would actually trade up for him in Baltimore.

Ozzie Newsome made his final first pick of a tight end, which was appropriate as everyone expected either Calvin Ridley (because he was still available) or Hayden Hurst, and he went with the latter. But then he made a move up into the bottom of the first round to get Lamar Jackson. Joe Flacco hasn’t been himself lately and Lamar Jackson is someone they can rebuild an entire offense around. Greg Roman is back in town, after developing offenses around Tyrod Taylor in Buffalo, and then Colin Kaepernick in San Francisco when they went to the Super Bowl.

There are still people rumbling that he should move to wide receiver, but the Ravens have been innovative before and they have someone they can be super innovative with now. I could see a situation with Lamar Jackson and Joe Flacco similar to what went down with Alex Smith and Kaepernick.