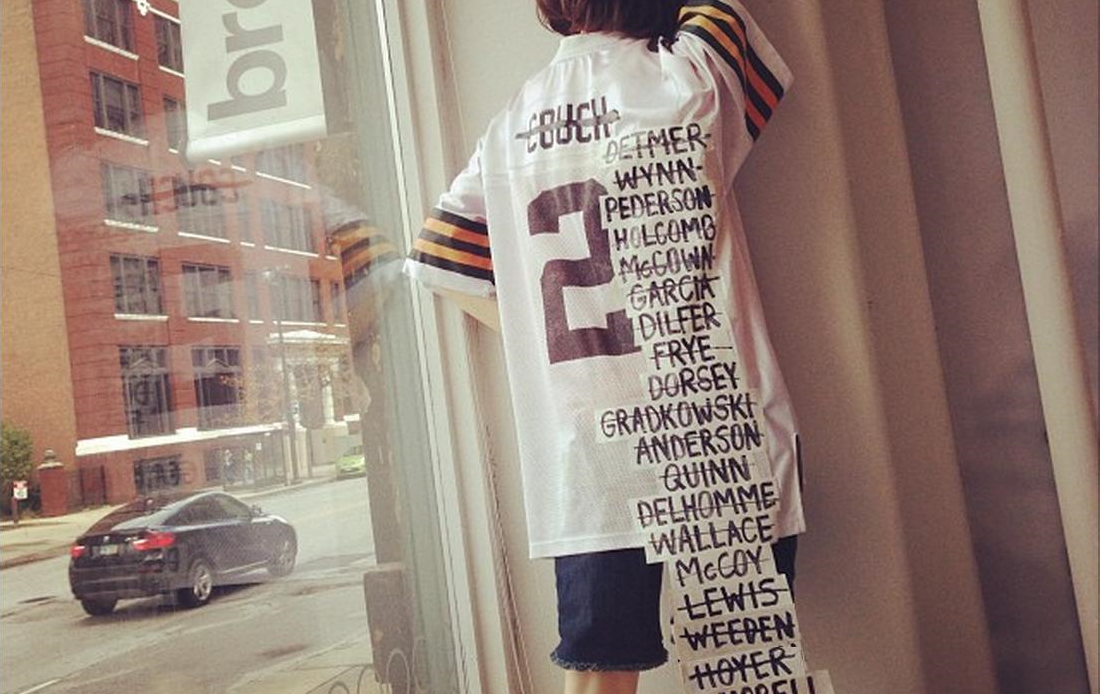 I’ve been hired as the Cleveland Browns GM at the last minute. I’m forced to take a quarterback with the #1 pick in this year’s draft. Who are the four guys that I am closest to picking and the one guy that I believe is THE guy for Cleveland’s future.

In other words, I’ve chosen to play the franchise mode on Madden and chosen the Browns for whatever stupid reason.

My list is not at all how I think they will pick, but how I would pick if I were in control…which thankfully I’m not.

Give me a winner first and foremost. Baker Mayfield is a flat out winner.

I don’t care about his antics on the field, as long as he’s getting the job done and not breaking the rules. His arrest is a different story, but I’m willing to give him the chance. When you win the game, you can plant your flag on the field. When you score a touchdown, you can gloat about it. Let’s keep the crotch grabbing to a minimum, but continue to have that same fire about you – and you’ll do alright.

Ultimately, Oklahoma was one of the best teams in college football last year, most likely #3 behind Georgia and Alabama. Their loss to Georgia was a shootout and you can’t blame Baker Mayfield for losing that game as Oklahoma still scored 48 points.

He’s not a serious runner, only rushing for 1,083 yards total in his career for 21 touchdowns, but he is mobile. I’ve seen some Russell Wilson comparisons and I’ll agree with that. Say what you want to about Russell Wilson, but he has played in a couple of Super Bowls.

Why he isn’t being talked about more for a potential number one pick, I don’t know. I’ll take him any day to be the guy passing for my team.

This is probably the most controversial one. You’ll notice there is one name noticeably absent from this list, and I basically replaced him with JT Barrett. While I don’t like Ohio State, I do like JT Barrett. He had to battle through plenty of adversity when he had to come in for Braxton Miller in 2014 after Miller was injured right before the season started, and he led Ohio State to a Big Ten championship appearance, where he was then injured himself. Then he had to watch third-string Cardale Jones lead his team over Wisconsin, Alabama and Oregon to win the national championship.

Then he lost the starting job to Cardale Jones the next season and rode the bench for most of 2015 until he took back the starting spot from Cardale Jones, and then he led the Buckeyes in 2016 and 2017 as the true starter. He essentially led the team to the Big Ten title game and playoffs in 2014, the playoffs again in 2016, and to another Big Ten title in 2017.

I like dual-threat guys, and JT Barrett is a good one. He got lost in the shuffle early with his injuries keeping him from playing on the biggest stage, and then the last couple of years with QB’s like Lamar Jackson, Deshaun Watson and last year with Baker Mayfield who beat him head-to-head and won the Heisman. I also want a guy that will win, and he went 38-6 overall in his career as a starter at Ohio State.

He is the only three-time team captain in Ohio State’s long and storied history and his 38 wins in 44 starts is a school record. Part of the reason scouts have him low is his ability to run a pro-style offense, but it’s funny how people don’t question Lamar Jackson as much about the same thing, or questioned Deshaun Watson, Cam Newton, or any other dual threat guy making it work. It actually says on his ESPN draft profile “He is not as accurate as his career completion percentage would suggest.” So I’m supposed to look at the stats and say Josh Allen is that much better because his bad stats don’t matter but Barrett’s good stats don’t matter either?

Some people think he might not even get drafted. I’ll take him if no one else wants him.

Lamar Jackson is a dynamic athlete, but he is someone I look at in a similar light as someone like Jalen Hurts. Do I think he’s a good enough athlete to win me some ball games? You’re darn right I do. Is he the best passer? Not at all.

But I want winners, and any offense of mine is going to need a mobile quarterback.

In three years at Louisville, Jackson threw for 9,043 yards which included 69 touchdowns to 27 interceptions (about 2.5 to 1). He only had a career completion percentage of around 56.6%, which is not too great. However, the one thing that stands out is that he did improve every single year. He threw for more yards with a higher completion percentage and many less sacks last season than he did in his Heisman winning season in 2016.

Of course his legs were a big reason why he won the Heisman, rushing for 4,132 yards and 50 touchdowns in his three year career which is an average of over 1,370 yards and 16 touchdowns a year. He also improved in that category as he had 28 fewer rushing attempts but 30 more yards. His yards per carry went up from 5.9 to 6.0 to 6.9

Bottom line, he could get the ball in the end zone, which I like.

Scouting reports mention that he needs some refinement in the passing game, which I agree with, but that he’s clearly explosive with the ball in his hands. He is a slender quarterback so durability could be an issue, especially with the amount he’s probably going to run the ball. When you want to compare him to another QB in the league, I think you have to look in the direction of Robert Griffin III or maybe a Colin Kaepernick.

I will admit, that his offensive line was not very good at Louisville, and with a good line in the pros, he could do some damage and have more time to go through his progressions and learn to be more of a pocket passer with the right coaching. I don’t know that he can contribute from day one though. He’d be coming in behind Tyrod Taylor who he could learn under with a similar style.

Here’s the thing about Josh Allen. He played at Wyoming. That doesn’t mean you can’t be a good NFL QB, as we have seen other small school QB’s succeed like Joe Flacco from Delaware and my favorite QB of all time, Steve McNair graduated from Alcorn State. But some people are cautious of drafting a guy from a small school.

Also, his college stats weren’t that great. He only completed around 56% of his passes both in 2016 and 2017. He had nearly a 2-to-1 touchdown to interception ratio. When you play for a small school, a lot of people automatically discredit you unless you back it up with insane numbers. Allen didn’t have that.

However, many people that are much smarter than me seem to think he has tremendous upside, and when they break it down with the fancy graphics on TV, I can see what they mean. Maybe the bad play was a product of a team that wasn’t that great.

Allen has good size (6-5) and does have a cannon for an arm. He’s looked good since the season ended in all of the drills, but we’ll see if that translates to Sundays or not. He also won’t have to play immediately with Tyrod Taylor in the house.

When it comes to what actually happens, I just want him to be drafted first so this guy has to live up to his word: 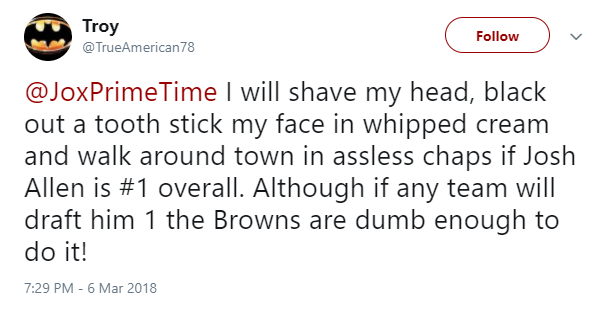 Josh Rosen is a weird kid. I don’t know if I could work with his strange personality or not, but he is a good quarterback. Don’t forget, this is the guy that said they need to raise the SAT eligibility requirements at Alabama because they were getting a bunch of dumb players, but also said that “human beings don’t belong in schools” while playing football.

Rosen completed 62.6% of his passes this season with a 2.6 to 1 touchdown to interception ratio. The single reason he makes my list is because of the kind of competitor he was in that Texas A&M game last year when there was no way in hell that they should have won that game. He led an amazing comeback and put up insane numbers (35/59, 491 yards, 4 TD). He was a three-year starter at UCLA and has played his fair share of good competition.