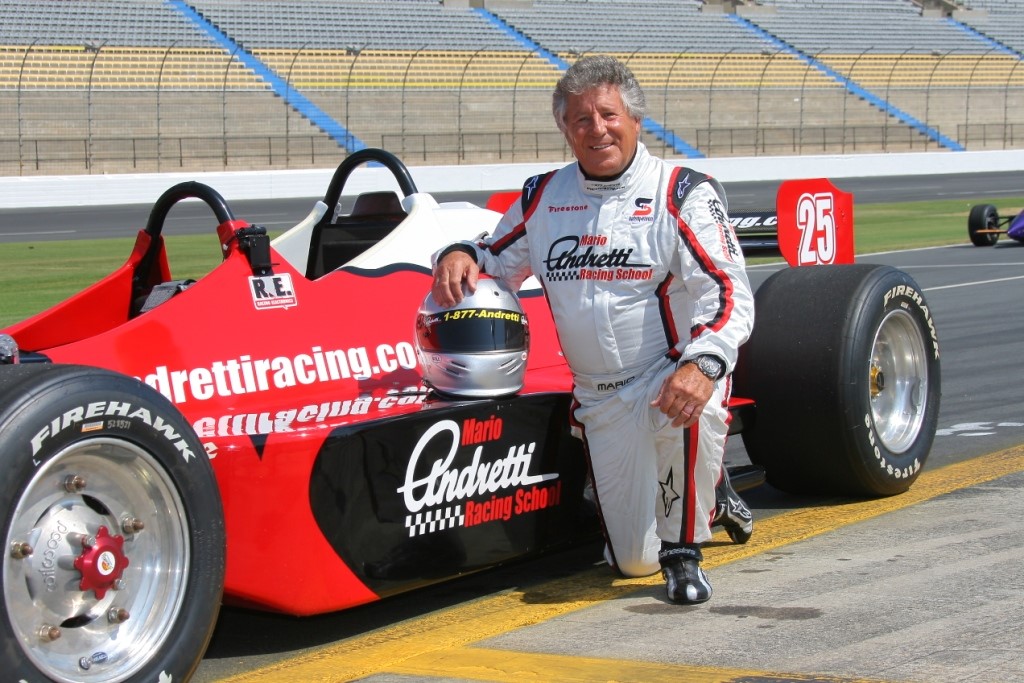 The big news yesterday came from a Bleacher Report story about Jalen Hurts and the potential of him transferring. In the story, Jalen’s dad said that if he doesn’t win the starting QB job, he will become “the biggest free agent in college football history.” We heard from all sorts of Alabama and Auburn fans and got the opinion of the masses which ended up telling us…nothing. People are still on Jalen’s side, people are still on Tua’s side, and some just say “whatever Saban does, I’ll trust.”

But that got us thinking…the topic for Lunce’s List today is who the five most well-known sports dads are.

This is kind of a two-for. The Andretti name is arguably the biggest name in all of motorsports, and the family has been involved for multiple generations.

Not all of them were super successful drivers, but Mario started it all. He is one of only two drivers ever to have won races in Formula One, IndyCar, World SportsCar and NASCAR. He won the 1978 F1 World Championship and four IndyCar titles. He is the only driver ever to win the Indianapolis 500 (1969), Daytona 500 (1967) and the Formula One World Championship, and along with Juan Pablo Montoya, has won a race in the NASCAR Cup Series, Formula One and Indy 500. Mario is also the last American to win a Formula One race, as none have done so since his victory at the 1978 Dutch Grand Prix.

Mario was born in Italy, but moved to America when he was 15 and is an American citizen. The Andretti family is the first family to have four relatives compete in the same series (Mario, Michael, Marco and John in IndyCar).

Michael Andretti is statistically one of the most successful drivers in American open-wheel racing history, amassing 42 victories. He also owns Andretti Autosport, which has won four IndyCar series championships and five Indy 500 races. Names like Tony Kanaan, Dario Franchitti, Ryan Hunter-Reay, and the last two Indy 500 winners, Takuma Sato and Alexander Rossi, have all driven and won either an Indy 500 or IndyCar championship for Andretti Autosport. One of the bigger names that also raced for Andretti was the late Dan Wheldon, who won both the Indy 500 and IndyCar championship in 2005 (6 total wins) for Andretti. Andretti had actually signed Dan Wheldon to a multi-year deal on October 16, 2011 to replace Danica Patrick who was racing for Andretti at the time. That was the same day Dan Wheldon was killed in an accident at Las Vegas Motor Speedway.

Although Marco hasn’t won the Indy 500 yet or an IndyCar series championship, he’s still one of the top 10 drivers in the sport, sitting in 10th place right now as they head into Barbers this weekend.

Not only did Archie have a long, successful career, but two of his sons have won multiple Super Bowls. Poor Cooper.

Peyton will go down as one of the greatest ever, and although Eli may not, he still has two huge Super Bowl wins, coming up clutch in both of them. The whole family is legendary in the SEC between Ole Miss and Tennessee.

Archie played at Ole Miss. His first notable moment was in the first ever prime time broadcast of a college football game back in 1969 when he threw for 436 yards and three touchdowns, along with rushing for 104 yards in a 33-32 loss to Alabama. He won the Walter Camp trophy in 1969 and also won SEC Player of the Year honors and was a first-team All-American. He was fourth in the Heisman Trophy voting in 1969, and third in 1970. The speed limit on campus at Ole Miss is 18 MPH in honor of his jersey number. He was named the SEC QB of the Quarter Century for 1950-75.

Archie was drafted in 1971 by the Saints with the #2 overall pick. He played there for ten full seasons, before spending time with the Oilers and Vikings to end his career. However, the Saints had nine losing seasons in his ten there. He was a 2x Pro Bowler in 1978 and 1979. Archie played so many seasons and was looked at as a good QB, but his teams always sucked.

Meanwhile, his kids have had a much more successful career than their dad. Four Super Bowls and 18 Pro Bowls between Peyton and Eli. I don’t have to go through explaining everything they have done – we’ve witnessed it here in the SEC and in the NFL where Eli is still playing and Peyton is recently retired.

Cooper is the oldest of the three Manning boys and had a breakout year at wide receiver his senior season while catching passes from Peyton. He signed with Ole Miss, but during the first practices in the summer before school, he felt some numbness in his fingers and toes, and was eventually diagnosed with spinal stenosis, which is a narrowing of the spine and pinching of the nerves. That effectively ended his playing career. Peyton chose #18 in the NFL due to it being Cooper’s number, and Cooper had it due to his dad wearing #18 at Ole Miss.

Perhaps one of the biggest father/son combos of all time within a sport comes with NASCAR, a sport known for staying in the family. 76 total Winston Cup wins, 21 Busch series wins, and seven series championships (tied for the most with Richard Petty and Jimmie Johnson). Not only was he the father of a driver that won the “Most Popular Driver” award 15 years in a row, but he was also the son of a NASCAR driver in Ralph Earnhardt.

The Earnhardt name is all over racing, and it’s thanks to Dale Sr:

– Teresa (wife) ran DEI for a long time and her first win as a team owner actually occurred in the 2001 Daytona 500, which is the same race that killed Earnhardt.
– Dale Jr. (son), well…you already know.
– Kelly (daughter) co-owns JR Motorsports (Xfinity team) with Dale Jr. and is credited with bringing Danica Patrick into the sport from IndyCar.
– Kerry (son) has raced in all three of NASCAR’s main series over 100 times.
– Jeffery (grandson) is an active racer in the Monster Energy series, and has raced over 100 races through all three series.
– Bobby (grandson) raced ARCA and Xfinity last year.

He made the #3 iconic, so much so that no one would dare touch that number for the longest time. Dale Jr. raced a couple of special appearances in a #3 Busch series car. Dale Sr. raced for Richard Childress Racing for the bulk of his career, and the number basically came out of retirement with Childress’ grandson, Austin Dillon. Austin and his brother Ty had used the #3 in some lower level competitions, and when Austin made his move to the highest series, he started driving the #3.

Doc Rivers has been involved with the NBA as a player or coach since 1983, and is currently the coach of the LA Clippers. He’s most known for his time as coach of the Boston Celtics, including winning the 2008 NBA Finals. What makes him make the list though, is that he became the first ever NBA coach to coach his own son, Austin Rivers, back in 2015.

Austin played one year at Duke where he was named ACC Rookie of the Year. However, the #2 Duke Blue Devils lost to #15 Lehigh in the first round that season. He was then drafted 10th overall to the New Orleans Hornets in the 2012 NBA Draft. He wore #25, which was the same number Doc wore when he played in the NBA. He joined the Hornets at the same time as Anthony Davis.

Doc played for 14 seasons in the NBA, mostly for the Hawks who drafted him 31st overall in 1983. He’s played for or been the head coach of six teams in the NBA: Hawks, Spurs, Knicks, Magic, Celtics, Clippers (only team he played and coached for). Doc’s real name is Glenn Anton Rivers, but he was given the nickname “Doc” by Rick Majerus who was an assistant at Marquette when Rivers was there. He attended a summer basketball camp wearing a Dr. J shirt and Majerus called him Doc, then it stuck forever.

While in the grand scheme of things, Ken Griffey Sr. may not be the biggest name ever, his son is one of the bigger names ever in baseball and he makes the list over anyone else because he and Ken Griffey Jr. became the first ever father-son tandem to play on the same MLB team. They played their first game together for the Mariners on August 31, 1990 and on September 14, 1990, father and son hit back to back home runs in a game – the only time it has ever happened in Major League Baseball history. Griffey also had a younger son, Craig, who played in the Mariners minor league system for a while.

Griffey Sr. was a 3x All-Star and 2x World Series Champion with the Big Red Machine in Cincinnati back in the 70’s. He played on the teams with names like Pete Rose and Johnny Bench.

Junior played 22 years in Major League Baseball, spending the majority of his career with the Mariners and his father’s Reds. He was a 13x All-Star, 1997 AL MVP, 10x Gold Glove and 7x Silver Slugger winner and 4x AL home run leader. Of course, he sometimes gets lost in the home run battle of 1998, but the reason it had so much buzz was because of Griffey and Mark McGwire going at it in 1997 with McGwire getting 58 and Griffey getting 56. In 1998, he fell behind a little with an injury and only finishing with 56 home runs behind Sosa (66) and McGwire (70), although it was still an amazing season.

There is also a third Ken Griffey, or “Trey” as he goes by. Trey plays for the Steelers after playing wide receiver at Arizona. Junior’s daughter, Taryn, also goes to Arizona and plays basketball.

Griffey Jr. also holds the recored with the highest % vote by the Baseball Writers’ Association of America for the Hall of Fame with 99.32% on his first ballot.

LaVar Ball (father of Lonzo Ball) – LaVar is a moron, but still well known and makes the list.

Don Shula (father of Mike Shula) – Only coach to have a team go undefeated in the NFL, and his son has had a long NFL coaching career and played/coached at Alabama.

Clay Matthews Jr. (father of Clay Matthews III) – Only father/son tandem to win Defensive Player of the Week, both made multiple Pro Bowls.

Richard Petty (father of Kyle Petty) – I had two racing families on the list, so Richard Petty definitely belongs here as well. I could have put Lee Petty (Richard’s dad) as well after he won the NASCAR title three times and was a NASCAR pioneer.

Bobby Hull (father of Brett Hull) – Bobby was a 10x All-Star First Teamer and Hall of Famer. Brett is one of the all-time greats, currently third in goals in NHL history and tied with Gretzky for most game-winning playoff goals. They are the only father-son Hall of Fame combination.