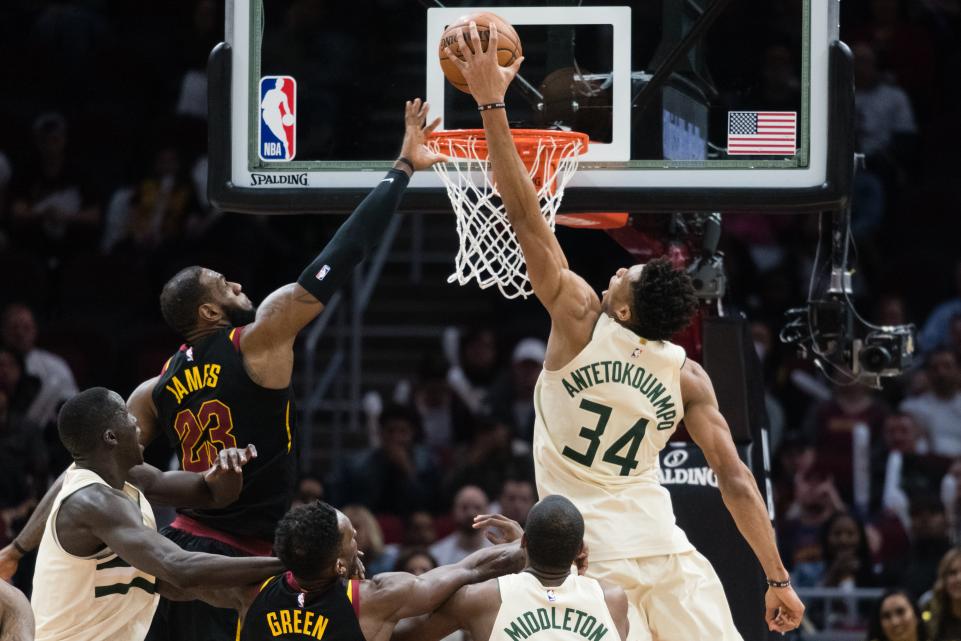 With that said, which NBA players are in the most intriguing position after the first weekend of games?

I feel like there is no other answer for this topic than LeBron. The Cavs were embarrassed in game one against the 5th seeded Pacers. Victor Oladipo went off for 32 points as the Pacers won 98-80. They were up 55-38 at the half. Cleveland had 17 turnovers to Indiana’s 11 and the Pacers shot 45.6% from the field, 39.3% from beyond the arc.

Game two isn’t until Wednesday, and Pacers have now flipped home court to their advantage. Cleveland has to win game two at home before it goes to Indiana for game three.

LeBron is playing it off like it’s nothing, throwing out there that they were down 3-1 to Golden State in 2016 and won the NBA Finals. However, that team had much better talent and that talent had played together longer.

The story with LeBron isn’t really what he will do this playoffs, but rather what he will do long-term. He will be a free agent this year and we’ll probably have another version of The Decision at some point. There are talks that he will go out west, maybe to San Antonio, possibly New York, or stay home in Cleveland. If he makes a first round exit, will people look at it as a team that made trades and didn’t have a lot of experience in the playoffs or playing together – or will they look at it as LeBron failing to get his team past the first round of the playoffs?

For the part of Lunce’s List that will be on the radio, I reserve the right to only call him the “Greek Freak”.

I’m a little biased since I’ve taken to the Bucks lately as my team of choice, but I have to put him on the list. The Bucks lost to the Celtics 113-107 in overtime after a huge three from Khris Middleton sent the game to overtime. Antetokounmpo led the way for the Bucks with 35 points in 35 minutes of action. Former Parker standout Eric Bledsoe didn’t play great and really no one else did outside of Middleton.

Antetokounmpo fouled out with 13 seconds left and it was a three-point ball game. However, the foul gave Boston more free throws and sealed the game. How will he play in game two and can the Celtics win a playoff series without their two best players on the floor? Antetokounmpo has never made it past the first round, and never made it past losing in six games in the first round.

The furthest Chris Paul has ever made it is the Conference Semi-finals (Round 2). He made it that far four times: New Orleans once (2008) and three times with the Clippers (2012, 2014, 2015). The Rockets are poised to make a run for it all this season as they finished first in the West, even ahead of Golden State. Could this be Chris Paul’s year?

Someone might want to tell him to wake up. Obviously James Harden is the MVP of this team, and perhaps the MVP of the league this year, but Chris Paul has to do more than he did in game one. The Rockets won 104-101 over the eighth seeded Timberwolves. Chris Paul’s stat line wasn’t great:

Paul averages 18.6 points per game, 5.4 rebounds per game, 7.9 assists per game, but only 2.2 turnovers per game. It was a slow first night for Paul, and he can afford that against the Timberwolves, but not any other team they face in the playoffs.

Without Steph Curry, some people may wonder how the Warriors will make it to the championship, especially since Houston is looking good with the #1 seed. Klay Thompson had the most minutes and points in their game one win over San Antonio, and was the only guard to start as they went with a bigger lineup with Curry out of the picture.

Thompson shot 11-13 from the field, including 5-6 beyond the arc. He might not have to play that lights out against the Spurs who are on the decline and without their best player in Kawhi Leonard, but he will against better teams. Curry is out for at least the first round, and Steve Kerr said “When he’s ready, he’s ready but he’s making progress.” So we’ll see how long Klay has to be the only guard on the floor.

The Pelicans stole home court advantage from the Trail Blazers as Anthony Davis had a huge game one with 35 points, 14 rebounds and four blocks. Davis has only made it to the playoffs once since joining the NBA and it was a quick 4-0 sweep from the Warriors as the Pelicans were the 8-seed back in 2015.

Saturday night was the first ever win for the franchise under the name Pelicans and the first win for Davis. The last playoff win for the franchise came back the 2011 playoffs where the Hornets lost 4-2 to the Lakers. The franchise, which has only existed since 2002 after the Charlotte Hornets picked up and moved to New Orleans, has only won one playoff series ever – back in 2008 when they won their division and beat the Mavericks 4-1 in the first round before losing in the conference semifinals to the Spurs 4-3.

If the Pelicans can indeed secure the series win over Portland, they would have to face the Warriors most likely, which would be where their playoff road ended, especially if Steph Curry is back.

Either way, for Anthony Davis to be a 5x All-Star, 2x All-NBA First Teamer, and more among his many accolades which we all first saw with an NCAA Championship at Kentucky – his teams have never done anything in the NBA. Could this finally be the year they make some noise?

Speaking of noise, I can’t ever discuss the Pelicans without throwing in this gem: