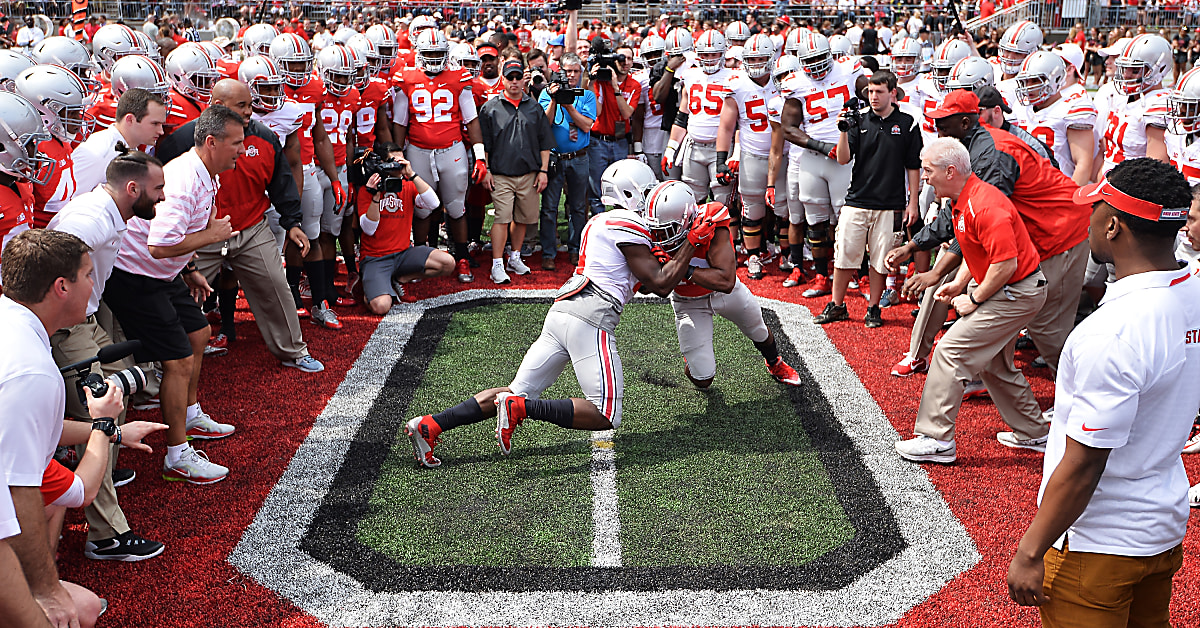 A lot of spring games are taking place this weekend, and while we’ve already seen Auburn and UAB hit the gridiron, and Alabama isn’t until next week – this week does see a few teams of interest.

Locally, South Alabama takes the field tomorrow. In the SEC, Kentucky does tonight and Texas A&M and Florida do tomorrow.

There are actually 52 spring games taking place this weekend between tonight and tomorrow. Of those, which five do I find most intriguing?

The story line with Florida is all about Dan Mullen producing some offense. Can he turn Feleipe Franks into something special or will Kyle Trask/Emory Jones take over this weekend? Mullen does get some of those players back from suspension in the credit fraud scandal from last season, but he needs to produce quick in order to not get run out of town (and stay away from sharks).

Todd Grantham takes over the defense, and he’s had success in the SEC before. Florida was known more for their defense under McElwain due to the team that Will Muschamp had built up. Those players are gone though so it will be time to start over again. Mississippi State had some decent defenses under Mullen though, so it should be alright.

I’m not 100% sold on Lincoln Riley leading this team moving forward. Sure, he made the playoff in year one, but he also had his Heisman winning quarterback return. It will be totally different moving forward.

Kyler Murray will have to step up and be the guy, after transferring away from Texas A&M. Murray should fit in alright, but we’ll have to see how he performs. It’s one thing to be the QB at a struggling Texas A&M. It’s another to step into the Big 12 where you are supposed to put up video game numbers, oh and you’re following the reigning Heisman winner. No pressure.

Also, because this is the Big 12, how will the defense look? Can they stop some of the high powered offenses in the Big 12? Can they stop their own this weekend without their star QB in the backfield? We’ll see.

I have more faith in Jimbo Fisher than most coaches in college football. It didn’t go well at the end for him at Florida State, and I understand that. However, I think he can do some damage at Texas A&M. I said that he would be the first Saban assistant to finally beat Saban, so we’ll see if that holds true since they are guaranteed to play every year.

The big question is at quarterback between Kellen Mond and Nick Starkel. Starkel was the starter, but got injured and Mond did a decent job in his place as a true freshman. Mond is a runner, Starkel is a passer.

If you want to tune in, Johnny Manziel will be there and will play QB in a flag football game at halftime.

Willie Taggart is back in the state of Florida and replaces Jimbo Fisher. The biggest question once again goes to quarterback. Do you automatically put Deondre Francois back in after getting injured week one against Alabama? Do you reward James Blackman who was thrown to the fire last season as a true freshman and had to play the entire season after the Francois injury?

Francois will miss the spring game, so we’ll be able to see how much Blackman has improved. Redshirt freshman Bailey Hockman will be the other QB. We’ll also get to see if Cam Akers has improved, as he was one of the top players in the country last year and didn’t live up to the hype in my opinion.

For Louisville, the big question is at quarterback. You lose a Heisman trophy winner, but you have some back-ups that may still be able to shine. Jawon Pass comes in as a redshirt sophomore and as Lamar Jackson’s backup last year, he threw 33 passes completing 69.7% of those for 238 yards and two touchdowns with no interceptions. It’s hard to tell much with that little bit of production.

He’ll have to hold off Malik Cunningham, who I thought was one of the best players in the state two years ago when he was at Park Crossing. He was a 4-star dual threat QB and would fit right into the mold of Lamar Jackson moving forward. This spring game will be interesting to watch because of the QB battle and to see what the Cardinals look like before their first game…against Alabama down in Orlando.

South Alabama (Saturday, Noon) – The Joey Jones era is over, and South Alabama is moving on with only the second coach in history.

Clemson (Saturday, 1:30 pm) – Not a great end to the season last year against Alabama, but Kelly Bryant is back as is the #1 recruit in the country, QB Trevor Lawrence and a former 5-star recruit in Hunter Johnson. Plus, how good will that defense continue to be?

USC (Saturday, 2:30 pm)- Matt Fink and Jack Sears are set to battle for the QB position now that Sam Darnold is gone. However, they do have a 5-star QB, JT Daniels, coming in this fall. So Fink and Sears have to play well this weekend.

Miami (Saturday, 5:00 pm) – Miami was oh so close last year, but fell short in the end. We’ll see what Mark Richt’s squad has this year.