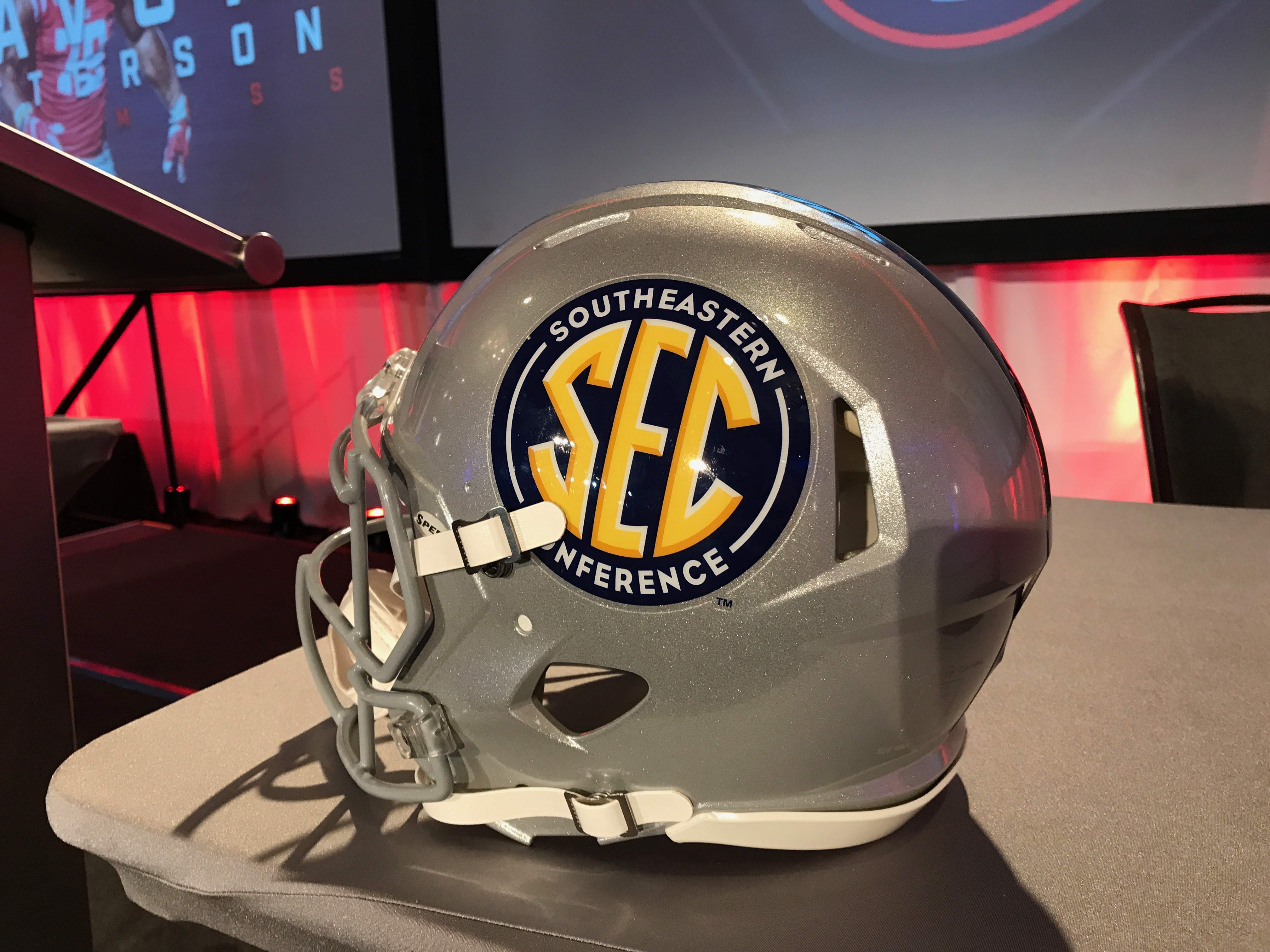 We all know what’s going on in-state with spring practice as Tua recovers from a broken finger and Auburn tries to stop injuring wide receivers. However, what is going in the rest of the SEC? Many programs are excited about new head coaches and new recruiting classes – but which story lines are the most intriguing and which teams will end up competing against Alabama and Auburn for the SEC title in the 2018 season?

Not only does Georgia have to replace the likes of Nick Chubb, Sony Michel and Roquan Smith, but they have some amazing recruits coming in in positions that they didn’t need to refill.

On the offensive end, Jake Fromm will most likely be the starter, but watch out for Justin Fields to be a guy that can step in and make an impact from his first snap, much in the way Tua Tagovailoa did. The biggest thing to watch here is that these two quarterbacks play totally different styles. Fromm is a drop-back passer and Fields can run the ball well as a dual-threat guy. I’ve seen comparisons to using him much in the same way that Tebow was utilized his first year with Chris Leaks.

The offensive line returns four starters, but there will be some youth on the offensive line with three of the projected starters being a redshirt sophomore or younger. Not only will they have to block for whoever is at quarterback, but also open holes for the future running backs. D’Andre Swift was great as a freshman last season and will almost certainly be the starter. The question will be – how does the ball get spread around. Elijah Holyfield and Brian Herrien are capable of getting more reps than they did last year but Georgia is also adding Zamir White as a recruit this season. However, he is rehabbing a right knee injury during the spring, so we won’t see him immediately.

On defense, not only is Roquan Smith gone, but so are nine other defensive contributors from last season. Jonathan Ledbetter is going to have to step up and be a big time leader on this defense. He’s already been a fixture on the line during his three seasons at Georgia, but he will have to take over the leader role in my opinion as one of the few veterans on the defense.

In summary, I feel like the offense is set for success. I didn’t even get into Riley Ridley coming back in his sophomore season after a great National Championship performance among their other good wide receivers. However, the defense has more questions. However, it’s Kirby Smart and Mel Tucker we’re talking about here.

2. Will Dan Mullen be able to produce on offense fast in Gainesville?

There are high hopes for Dan Mullen at Florida. He was there under Urban Meyer and worked with Tim Tebow when they were so successful, and for the limited resources and players, he did a good job at Mississippi State, grooming two outstanding quarterbacks in Dak Prescott and Nick Fitzgerald.

Feleipe Franks is the assumed starter, and there were high hopes for him last year in a floundering offense. Emory Jones, Kyle Trask and Jake Allen are the competition for Franks. I personally am a fan of Kadarius Toney getting some more reps, but he has officially been moved to slot receiver. I imagine we’ll see him in the wildcat plenty this season.

Another big plus for Mullen is that he gets Jordan Scarlett and other players back after being suspended the entire 2017 season due to their credit card fraud issues that hit at the beginning of the season. One would assume that Jordan Scarlett could earn his playing time back, but we’ll have to see. Sophomore RB Malik Davis won’t be a full participant in spring due to a knee injury but he was a running back that stepped up last season.

3. Welcome back to the SEC Jimbo Fisher, who is your quarterback?

Another national championship winning coach joins the SEC West, and it’s someone who already knows the lay of the land somewhat after being an assistant at Auburn for a good number of years, and of course spending time as Nick Saban’s offensive coordinator at LSU – Jimbo Fisher.

The biggest question for me is – who does he put in at QB? At FSU, he had some good ones in Jameis Winston and Christian Ponder but who will be his first stud at Texas A&M? Nick Starkel is the favorite if I had to guess, but I think Kellen Mond could eventually be a good quarterback. He was thrown to the wolves after Starkel was injured against UCLA last year in the opener. Starkel did complete 60% of his passes last year in games he did play in, including a 499 yard and four touchdown game in the Belk Bowl. Mond can run the ball well, and started eight games last season, completing 51.4% of his passes and leading Texas A&M to a 5-3 record, one of those losses being the close game against Alabama.

Johnny Football is in town to throw for pro day, so maybe he can offer some pointers to whoever takes over the job.

Not to mention, they had an ace receiver who could catch anything in Christian Kirk, but now he’s gone. Also gone is their second pass catcher Damion Ratley. Those two combined for over 1600 yards and 16 touchdowns. Luckily, Trayveon Williams is back and I think he’s one of the most dynamic rushers in the SEC. They do lose Keith Ford, but Williams is the main workhorse.

4. Nick Fitzgerald is back, can he lead Mississippi State to something special?

Nick Fitzgerald is back, but Dan Mullen isn’t. Joe Moorhead is coming in from Penn State where he was offensive coordinator for a decent offense. He’s brought in an interesting staff with professional coaches like OC Luke Getsy, coaches he had at Fordham (his one head coaching job) and a guy I know really well in my former head coach Joey Jones. I can’t wait to watch this team compete in the SEC West.

Nick Fitzgerald is coming off an injury last season in the Egg Bowl. Moorhead has said he’s ahead of schedule in his rehab, but Fitzgerald isn’t competing in full speed drills yet. Fitzgerald himself said that he wouldn’t be 100% until August. So there is a lot of waiting happening in Starkville until he can return 100% and the Bulldogs can take the field under this new regime.

Even still, Mississippi State couldn’t win their big games last year except for LSU. They played Alabama and rival Ole Miss close, but got thumped by division champs Georgia and Auburn. This season, they get Auburn and Texas A&M at home, but travel to LSU, Alabama and Ole Miss.

To hear more from Joe Moorhead and his opinion on coaching at Mississippi State, 3 Man Front talked to him today on their show:

5. Can a coach from Hoover HS return one of the winningest programs to it’s former glory?

The Tennessee coaching search was a mess…and that’s putting it lightly. With all of the stuff that has come out from John Currie’s terrible job looking for a coach, Tennessee keeps getting black eyes. But fans hope that Jeremy Pruitt can turn it around.

This is Jeremy Pruitt’s first head coaching job ever. Before being defensive coordinator at Alabama, Georgia and Florida State, he was DC at Hoover and Plainview High School. He wasn’t even a high school head coach.

On top of this being Pruitt’s first head job, he also has to deal with the second winningest coach in Tennessee history breathing down his neck in Phil Fulmer who is now athletic director. Everything that has come out about how Tennessee operates is just…gross, and I could never take a head coaching job there. Good luck to Jeremy Pruitt, because he’s going to need it. I think Pruitt is a good coach, but this will be a tough task. Of course they have to play Alabama and Georgia each year and that won’t help. This year won’t be any better, Pruitt has to face: Alabama, at Georgia, at Auburn, at South Carolina, and West Virginia in Charlotte to start the season.

If Pruitt wins more than 6-7 games, I’ll be impressed. It doesn’t help that I don’t think Jarrett Guarantano can do much at QB and may not even win the job over Will McBride. They lose John Kelly at running back which was one of their few bright spots last year. Pruitt has to have a great recruiting class next season or it could be a short tenure for him in Knoxville.