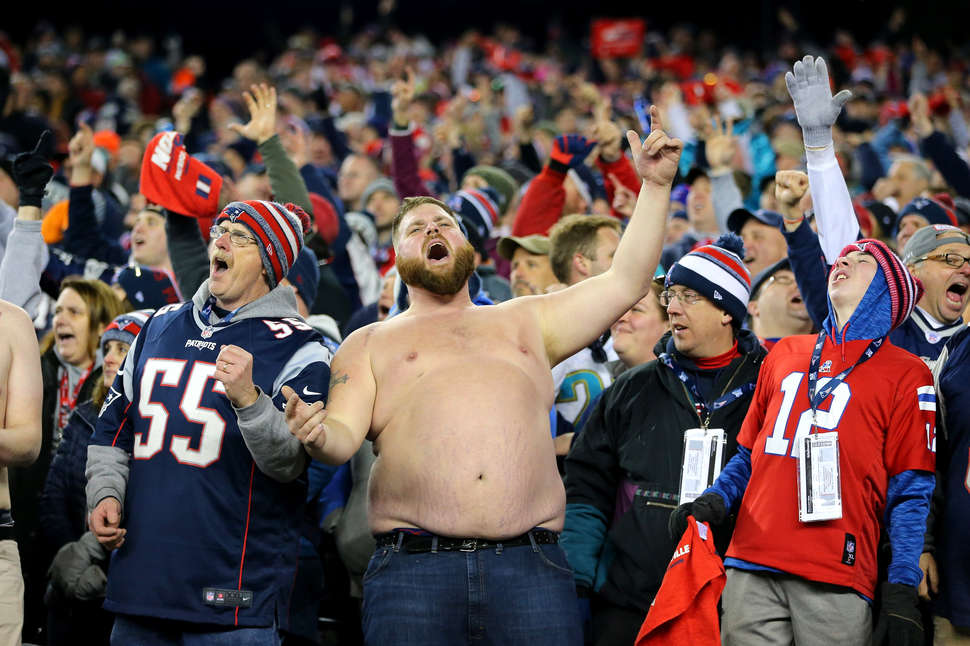 We’re all fans of some kind of team out there – no matter the sport, no matter the level. However, every fan base has those fans that make you embarrassed to be associated with the same team. Who are the worst? The drunk ones? The armchair QB’s? The bandwagon jumpers?

Here are the five worst types of sports fans in my opinion.

I don’t intend this to sound mean. Almost every fan that calls in to our show or tweets in to the show says “we” about their favorite team. However, I’m of the mindset that you can’t legitimately say “we” unless you actually played for the team. Even just going to school there doesn’t mean you can say “we.”

For instance, I can only say “we” about Homewood High School and Birmingham-Southern College’s football teams because I played for them. I attended Alabama and Rutgers as well, but I will never say “we” about either of those schools. For pro teams, unless you work for the franchise (or played for them as well), then you can’t say “we”.

Just because you’re paying them money, doesn’t mean you get to say “we”. If you’re talking about the fan base, then yes, you can say “we”. For instance:

Correct: “We need to be louder, the team needs our support!”

Incorrect: “We need to score a touchdown!”

Correct: “We as a fan base are definitely happy with the job that the head coach is doing.”

Incorrect: “We are happy with the job our head coach is doing.”

The prime example of bandwagon fans in my opinion is hockey. We live in a state that really doesn’t care about hockey for the most part. Sure, the Bulls are fun to watch every now and then, but the closest NHL franchise is Nashville. There used to be a team in Atlanta, but Nashville is now really good. They locked up the first playoff spot and have gotten points in their last 15 games. When they made the Stanley Cup last year, all kinds of Preds fans came out of the woodwork. However, almost none of those fans could tell you anything about the team this year.

The other kind of bandwagon fans I hate are:

It’s amazing how much more I heard from “Cubs fans” when they won the world series. The Yankees/Lakers/Patriots/Cowboys fans are just fans that have latched on to a top franchise. Really any Boston team is up there. I joke about being a Red Sox fan, but I really don’t care about baseball at all. I only say I’m a Red Sox fan because I sang the national anthem at Fenway before a game once. (True story)

If you are a fan of one of these teams, you better be a fan while they are awful too. It’s amazing how few Lakers fans I hear from these days after they stopped winning championships and Kobe retired.

Also, you can’t flip-flop within a season. That counts as being super bandwagon. You can’t be like this all season – “I knew we were going to self-destruct!” “All right, we won six straight!” “I knew we wouldn’t keep playing this well.” “I knew we would bounce back!”

I joke about being a fan of the Red Sox, and being a fan of the Bucks, Nets and Cavs in the NBA because – Eric Bledsoe (Parker HS) plays for the Bucks, Ronald Nored (Homewood HS) is the Nets’ G-League coach and I shook Larry Nance’s hand 25 years ago at the Omni, but the only pro teams I’m actually a real fan of are the Preds and Titans. I jumped on both of those when they started up in Nashville around the same time mostly because of geography and it was anti-Atlanta. This doesn’t apply to Birmingham since we don’t have any major professional teams, but I think you have to root for teams that are in your city or geographically close. You can’t say “oh, the Browns suck, so I’m going to be a Cowboys fan even though I live in Cleveland.”

I follow Bill Simmons’ rules for choosing teams – you have to cheer for a team in your city. If there isn’t one, choose another team and then you are stuck with that team for life, unless…

– Your team moves to another city (eg. Seattle Supersonics fans don’t have to be OKC Thunder fans)

– One of your immediate family members either plays for or takes a relevant management/coaching/front office position with a pro team.

– You follow your favorite college star (who has to be a once-in-a-generation favorite college star) to the pros and root for his team. For instance, you love UNC, so you cheer for Michael Jordan and the Bulls or Vince Carter and whatever team he plays for. Locally, a good example would be Cam Newton and the Panthers. This only works if there isn’t a pro team in your area.

– The owner of your favorite team treated his fans so bad over the years that you couldn’t take it anymore and you would rather not follow them at all. You can either renounce that team and pick someone else, or just pretend like they are dead like you’re a grieving widow.

– If you’re between the ages of 20-40 and you’re a fan of the Yankees, Cowboys, Braves, Raiders, Steelers, Celtics, Lakers, Bulls, Canadiens and/or Oilers, and you’re not actually from those cities, then you better have a better reason than “When I was picking a team as a kid, they were the best, so I picked them.” At least have a reason like “So and so was my favorite player growing up,” or “I always liked the red Bulls uniforms” or something like that.

Otherwise known as the “Run the dang ball” fans. The guys who are complaining non-stop about play calls and personnel are the worst. You can tell they are way too many drinks in when they arrive to the stadium and no doubt have some minis hidden in places I’d rather not know about. It’s not just “oh, I didn’t like that 3rd and long call”, it’s EVERY. SINGLE. PLAY.

If you are a Seahawks fan that hates the final play call in the Super Bowl – that’s understandable. But you can’t then turn around and say “Pete Carroll is a dreadful coach” when the dude won you a Super Bowl.

4. Fans that are more worried about literally anything else other than the game

You see this all the time, but I’ve been to plenty of Alabama and Auburn football games where they have been playing a team from who cares where because they are an FCS or Group of 5 team that you know the home team is going to crush 90-0. So the season ticket holders don’t go and give their tickets to their buddy or sell them on some ticket exchange. Then the people that go never actually pay attention to the game.

I went to the Alabama/Tennessee game this year, and there was a dude sitting in front of me that was basically John Cena’s twin brother. He was so ripped and huge that he literally pushed his wife/girlfriend/escort off the padded seat next to him. She was hanging on by one butt cheek and was about to just tip over at any moment. In fairness, the dude was actually pretty nice, but he spent the ENTIRE GAME on his phone taking pictures and videos for his Snapchat account. Team running on the field? Snapchat. A 3rd and 4 play from Alabama’s own 33 yard line? Snapchat. Halftime marching band performance? Snapchat. I could have watched the entire game from his freaking Snapchat account. He stood up non-stop, and had his phone up taking pictures of everything.

The worst part of the whole John Cena experience was at the end when Alabama won, everyone broke out the cigars. My allergies act up if I even think about cigarette or cigar smoke, so when the whole stadium lights up, it’s 10x worse. Well, this dude rips out a huge cigar and starts smoking it so he can get 50 selfies of him smoking. However, he then proceeds to pull an ENTIRE BOX out and hands them to every single person around.

I guarantee that guy couldn’t name the starting quarterback for Alabama, who the head coach is, or even who won the game that day. He probably would have lit up if Tennessee had won 49-0.

5. Fans who are only negative

I know everyone is negative when their team loses, but sometimes fans take it overboard. I have plenty of people who I never heard from except when their team loses, be it Alabama or Auburn, football or basketball. When the team is winning, they are either non-existent, or still trying to find something negative to talk about. When the team is losing, they are in heaven because they only care about being miserable.

It’s not even that they are angry sometimes, but rather they want to be so negative about a coach or a player that they are actually trying to come off as super knowledgeable, and in their mind if they stay quiet when things go wrong, then they aren’t looked at as someone who knows their stuff. It was amazing listening to the Alabama fans after the Texas basketball game this year. Alabama was embarrassed in that game, and as I walked around the BJCC and then on the way to my car after the game, there were so many people losing their minds.

“Avery is an idiot”

“I never wanted Avery to be coach anyway”

“Avery has never done anything successful”

“Avery wasn’t even that good in the NBA”

– Fans that stand up all game. I paid for my ticket and bought a SEAT, so I want to sit down. You standing up isn’t going to make your team score any faster.

– Fans that always want to high five you when something good happens. Like, I don’t want to touch you dude, turn around and leave me alone.

– Fans of Olympic sports that couldn’t tell you the first thing about that specific sport. It’s obviously cool to be pro-USA and all, but don’t come in here like you’ve followed curling for 40 years.