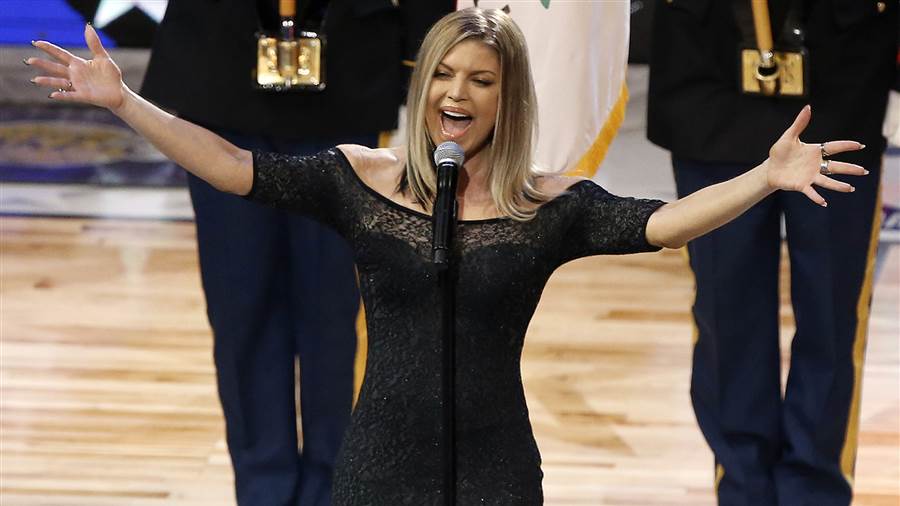 So this was a complicated one to do. I was tasked with being hired as the new “XFL Entertainment Coordinator” and Vince McMahon told me that the national anthem is the most important thing to get right in the first broadcast of an XFL game. He also tells me not to blow the whole budget on getting a big name to come and sing the anthem for the inaugural game. He wants someone who could go viral, but in a good way, and get people talking about the league.

All of this comes on the heels of Fergie absolutely bombing on Sunday night when she sang the national anthem before the NBA All-Star game. The broadcast of the anthem was filled with the biggest names in basketball and show business laughing as she put her own, unique…spin on the anthem.

You can check it out here:

So I wanted to go for something I knew would sound good, yet might not “break the bank” as Tim put it. I don’t know that many of these people would command a ton of money or not, that’s just not something we’ll ever actually know.

I heard Little Big Town sing the anthem before a Nashville Predators playoff hockey game last year, and it was probably the best I’ve ever heard. They also did a great job in Tampa last year for the national championship. It was a capella (which I think the national anthem should always be) and it was phenomenal with four-part harmony with both male and female vocals. They were all perfectly on key and it was just perfect.

Also, it doesn’t hurt that the origins of the band are traced back to my hometown of Homewood, AL at Samford University. I didn’t consider them quite as big as Lady Antebellum or Carrie Underwood because they haven’t won quite the same number of awards as some other major country names.

This is a personal pick, but I think Jordin Sparks is one of the greatest singers of all time. She won American Idol in season 6 and has killed the national anthem every time she’s done it. She sang it before Super Bowl 42, and recently did a really good version during the NHL Stadium Series at Dodger Stadium.

She suffered a vocal cord hemorrhage, similar to what Adele suffered a few years back. That led to a bunch of time off, then she’s been away for a while because she just got married and is pregnant with her first child. But this would be a great name to get to comeback, especially if the league has any kind of TV deal with Disney, since ABC now has American Idol.

It also helps that her dad played in the NFL for 9 years, with the Giants and Cowboys, so she has a football background.

Who better to sing the national anthem than those who fight to protect it? There are choirs for all branches of the military I think, and at Super Bowl 39, the combined choirs of the Army, Navy, Air Force, and Coast Guard sang with the US Army Herald Trumpets.

I mean, you can’t get much better than that. And I doubt it costs any money.

When they did it at Super Bowl 39, which was the first Patriots/Eagles match-up, Bill Clinton and George HW Bush were there and of course there was a great flyover as well. All of that makes it a memorable national anthem. Especially if you could get the current president, who we know Vince is buddies with, and the former presidents who are still alive to all come together.

Good harmony, but it’s all male voices. I like the blend of female and male voices in there. Still, I did like their rendition at the national championship game this year compared to when I last remember watching them do it at the Winter Classic in 2014 when they played at the Big House. They also did it at the Alabama/Notre Dame championship game as well, although they have gotten better since then.

There is a theme here of a capella anthems, so why not get the biggest a capella group on the planet? Now, they may be a bit big, but I feel like they would still be a good choice. I actually haven’t heard them sing the anthem before, and the only real video I can find of them singing all together is from a Charlotte Bobcats game from a while back.

Rascal Flatts – They did a good version during the World Series back in 2013.

T-Pain – Can actually sing really well, and did a great version for the Dodgers a while back. He has to dial it back a little though on the improvisation, which is why I didn’t include him.

Tenacious D – This is a bizarre choice, I know, but Jack Black and Kyle Gass have some amazing harmonies, and if they could work in a little guitar with it, I think it could be good and something unexpected.

Gaten Matarazzo – The kid that plays Dustin on Stranger Things. He’s actually a really good singer and has done it solo or with his sister. Although as he is getting older, his sweet child-like voice is turning into a man’s voice, so who knows what it would be like in a couple of years.

Some names that I excluded because I thought they would “break the bank”: