The 2015 League of Legends World Championships are getting underway on Thursday, and day one features action from 12 of the 16 teams that have qualified from around the world. As we head into the first ever DraftKings fantasy competitions for esports, here are some picks that should work in your favor on day one.

First, a look at the overall layout and scores for each position: 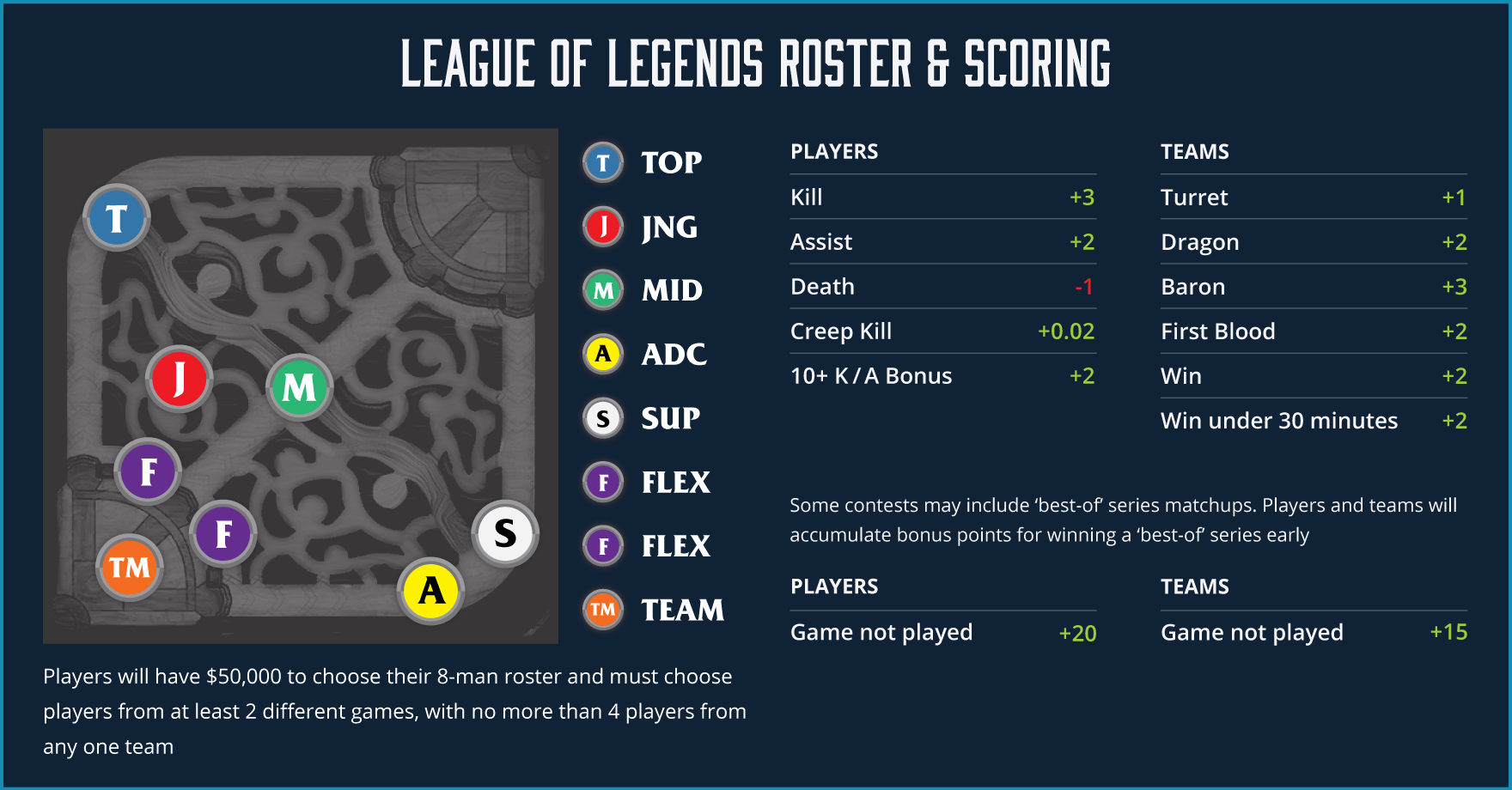 It’s important to note that the first couple of weeks consists of a group stage where teams only play one match a day, so the “best-of” bonuses don’t exist. That will begin once bracket play has started on October 15th. From October 1-4 and 8-11, it will only be one match at a time.

Now that you see how the layout is and how players are scored – it’s time to look at the top targets for day one. You will see a lot of players from SK Telecom T1 and Edward Gaming for a reason. But there are some other picks you should do well with mixed in also.

MaRin finished the LCK summer season with a higher average of kills than any of the other top players to qualify for worlds at 4.1. To add to his skill, he is a confident player, proclaiming that he is the best top laner in Korea. They have a favorable match-up on day one against H2k from Europe. He needs to use this game to hone his skills before he faces Koro1, who he lost to in the mid-season invitational. He has a match-up against Odoamne from H2k in his first game, who is listed as the highest scoring top player. Don’t be fooled though, MaRin definitely has the advantage here, and Odoamne’s numbers are inflated from the LCS. MaRin is probably the best bang for the buck for a more expensive top-laner, although KOO will likely have an easier match-up.

EDIT: As of Tuesday (9/29) morning, Koro1 has been pulled from the starting lineup and is now the sub for Edward Gaming. AmazingJ will most likely now be the starter in the top lane for EDG. So, although he was a sexy pick for match-ups against H2k and BKT (and AmazingJ wouldn’t be bad), for now, I would recommend staying away from this top lane.

Ziv is a top laner that should give you a decent amount of points from assists as he is very involved in setting his team up for kills. He is also laning against Balls, who has had trouble and looked very weak at times for Cloud 9. This is a game that ahq should win, and it will be because of strong player from Ziv.

Going into the summer split, Huni was considered one of the strongest top laners in the LCS across both leagues, and he has helped this fnatic team to be the most successful LCS team ever, going undefeated in the summer season, and only dropping two games in the playoffs. People will point to the European LCS as being fairly weak, so it’s not that great of an achievement, but it still means something to play so well. For a little cheaper pick, definitely look at Huni.

Clearlove is easily the top jungler of day one, as he has been around for a while and is known as a strong farmer. However, he has been able to adapt his gameplay to be a solid ganker as well. He has a fairly wide champion pool and won with eight different characters in the LPL summer season. EDG has a very favorable match-up on day one against BKT, but Clearlove is also the second most expensive jungler, so be careful with the pricing.

For being $1,000 less than Clearlove, this is probably one of the better picks you can make. bengi is one of only a couple of players who are playing for their second world championship, and they get to make a strong first statement against H2k. Clearlove’s match-up is probably easier, but this one won’t be too much of a challenge for SKT.

While Reignover or Kakao may not be bad picks in the jungle that are a little cheaper, it might interesting to look into Hai. He is much cheaper at only $4,800 and is part of the reason that Cloud 9 is here at all. After Hai “retired”, Cloud 9 went 3-7 in the summer split. When he came back, they went through a massive gauntlet and went 12-10 over all their games to sneak in as the third seed from North America. Hai also has a carry mentality since he was Cloud 9’s mid player for so long. They have a tough first match-up against ahq, but for the price, he may not be a bad play.

Faker is considered one of the best, if not THE best player in the tournament. Faker is going for championship #2 this year along with his teammate bengi and they are primed to get it done. They will eventually run into Edward Gaming in their group, which was just terrible luck, but because of that, they will need to play very solid in the rest of their games and go undefeated. Faker is also facing off against Ryu from H2k, who used to play for KT Rolster in Korea. Ryu has claimed he is insta-locking Zed so he can take out Faker, but that also gives Faker some time to plan for how he can defeat Ryu again. Faker is just the flat out better player here. Also, don’t be fooled by his top champions, Faker has a wide variety and played 12 champs in the summer season, with only Viktor being played more than 3 games.

PawN might be worth the expensive price tag only because he has an easy match-up and should dominate. PawN vs. Faker will be amazing to watch soon, but for now, he gets to beat up on BKT, but you’re definitely paying for a lot here. He also has a very wide champion pool which almost guarantees success against lesser opponent, no matter how they try to ban him out.

Febiven has always been a solid player and is perhaps a little lesser known and talked about than some of his fnatic counterparts. In a game that could go either way between fnatic and iG, Febiven should be solid no matter what. Rookie from iG comes in at $6,700 so for only $100 more, Febiven is a way better pick in my opinion.

If you’re going to go with a Korean ADC to start things off, Bang is a way better value than PraY. PraY’s $8,800 price tag is a little much, considering he’s had a few slumps over the last season. Bang has played less games, so he won’t have the same kind of numbers that PraY will, but there is a reason SKT is the #1 team from Korea.

Beware the price tag, yet know how easy of a match-up it should be for Deft against BKT. The problem is, this game should be over so fast, the CS numbers can’t accumulate, nor the kills/assists. We’ll see how many points all of EDG can rack up in their games against BKT and H2k.

Probably the only American player you’ll ever see up here, Doublelift is still a semi-risky play now that CLG is up on the world stage. However, day one against Flash Wolves would be a good time for him to really show what he’s got. If you can’t afford Deft, and need someone else outside of Bang, look for Doublelift. Because of Bang being cheaper, I don’t expect a lot of plays on Doublelift, which could make him a good pick in leagues. You won’t know when picking your players what champs they will get, but if Doublelift can get his hands on Tristana, he is a great asset to have.

It seems to be a theme that fnatic players are value picks, but they are cheaper because of being from Europe. However, Rekkles has been a top ADC since he burst on the scene and well worth the price. He first came to League a couple of years ago with fnatic, but was too young to play. For the price, Rekkles is a great pick-up as a secondary ADC, or even a first pick ADC over someone like Bang. fnatic is going to have to make a strong showing one day one against iG and Rekkles is primed to have a big game to help his team get that win.

When it comes to fantasy, it’s important to note that Gorilla has the most 10+ K/A matches of any player on the board, regardless of position. Supports rack up crazy assists, so despite them all being cheaper players, picking a good one is important. You most likely will want to go with a support player in a flex position as well due to this. Gorilla is a strong first pick for support because he works alongside PraY and is facing a very weak match-up to start things off. Not to mention, he’s just flat out the best support in the tournament.

For the price, there is not much of a better value than YellOwStaR at $5,300 and being the 6th lowest valued support. Once again, his numbers are inflated due to fnatic’s LCS season, but he is one of the most solid support players in the game. He is one of only two players who has qualified for all five world championships, with the other being Dyrus from TSM. Although he was on aAa that lost to fnatic in Season 1, he has seen more success than any other western player. Another skill he has is that he played ADC for a while, so he understands the position that he is working with as a support better than most. He makes every ADC he plays with look like a rock star, and now, he has Rekkles with him who has been outstanding.

A budget pick that doesn’t need to be played if any of the above options can. iG has fnatic first and that could be a tough match-up, but Kitties has the 2nd most overall 10+ K/A matches, only behind Gorilla. His ADC isn’t quite as good as many other support players, and since they are typically attached at the hip to start things off, it’s important to know who is playing with a good ADC when picking a support. If you need a cheap play though, Kitties could work if iG comes out with a strong first game.

Teams will play more of a role when we get to the multi-game series, but for this one, you may not have a ton of money left over to pick one of the top ones. If you do, SKT is your best bet since they are a tick lower than EDG and KOO.

You could also go with fnatic at $3,500, but they have a much tougher match-up against iG. CLG should win their game against Flash Wolves, and get a decent amount of points for a little cheaper price than the Korean/Chinese teams.

Day One: vs. yoe Flash Wolves