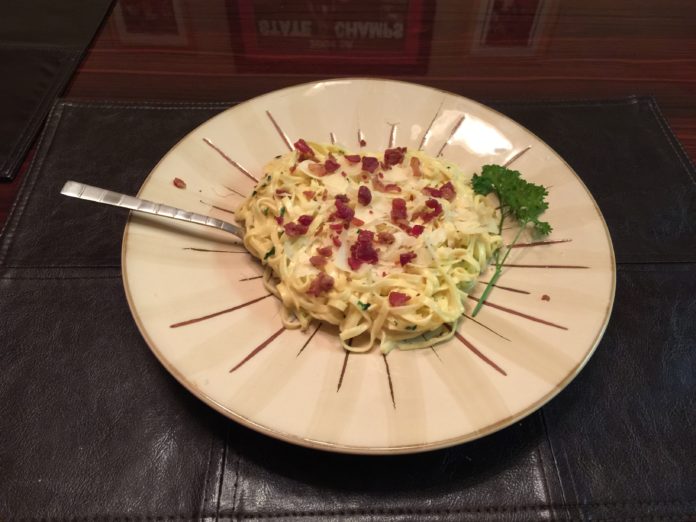 If anyone knows me and my food, they know there is one thing I always HAVE to get when I go to an Italian place – Fettuccine Alfredo (preferably with chicken). There are probably tons of wonderful dishes I have missed out on over the years because I just have to have fettuccine Alfredo whenever I eat in an Italian restaurant.

I tried to make my own Alfredo sauce a few weeks ago and it didn’t turn out as well as I would have hoped. It was a “lighter” recipe and didn’t make a ton of sauce, just enough to barely coat the noodles. Well, this is American Fettuccine Alfredo, so it clearly needs a little more than that. Here is what the last attempt looked like (with shrimp):

I moved on to a new recipe last night which worked out a little better. It definitely made more sauce, although it was a little watery for my liking. I might try something to thicken it up next time, or maybe try some fresh cheese instead of just pre-done cheese.

9 oz of pasta (I prefer fresher pasta, such as Buitoni)
3 cloves of garlic
1/2 cup of milk (I used 2%, but that’s just what I had)
1/2 cup of heavy cream
1/2 cup of freshly grated parmesan cheese
1 tablespoon of butter
1 large egg yolk, beaten
1 tablespoon of fresh parsley leaves
salt and pepper
olive oil

Cook the pasta according to whatever the instructions say. If you use the Buitoni pasta, put a little olive oil in the water, it helps add a little to the pasta. Also, the fresh pasta only takes 2-3 minutes to prepare, so if you’re good at multitasking, start boiling the water while preparing the sauce, and then the pasta and sauce should be good around the same time.

For the sauce, start by melting the butter and mixing in the garlic, milk and heavy cream. I think I used about 3 cloves of garlic, but I have this super mutated garlic where each clove is like the size of three to four normal cloves.

Mix all that together on medium heat until it’s all mixed up, then turn it down to a simmer and add the cheese and egg yolk. Make sure to keep stirring so that the egg doesn’t try to scramble. The sauce should get a little thicker after you add the cheese. If you want to add a little more cheese, I don’t think anyone will complain.

Once the sauce is good and mixed up, and the pasta is ready, then grab a pair of tongs and start to toss the pasta in the sauce. While tossing it together, throw in your parsley, then some salt and pepper to taste.

I actually have my own parsley I’ve been growing in a herb garden in my back yard. This was the first time I’ve been able to use it, and it was great to have something that you have grown yourself in your recipe.

I added a little bacon on top for some flavor because…bacon. It also added some color for the picture.

You can add some cheese too on top. More cheese never hurt.