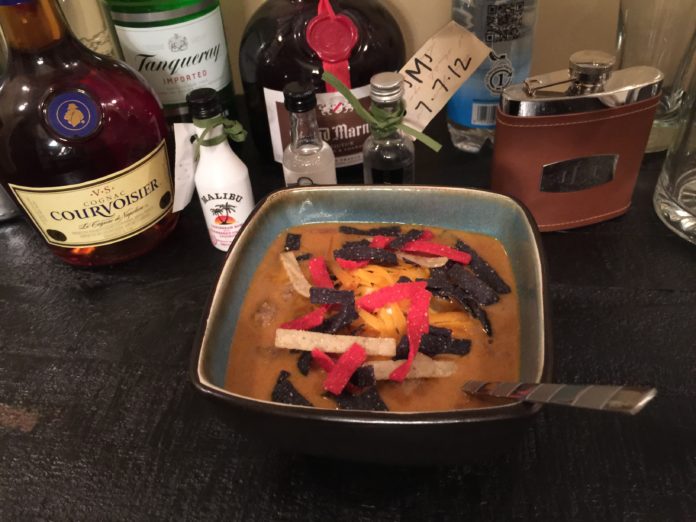 Two things in one week? Crazy!

I made a pizza on Sunday that didn’t look all that great, but it was still fairly tasty. So I decided to make some soup last night. Soup always seems easier to make than other food because it’s more of a “throw it all in the pot and stir it together”. This wasn’t quite like that (and most soups aren’t), however, it was still pretty easy to make.

I know I usually start these things with “it looked good, but only tasted ok (or not good at all),” but this soup was quite possibly the greatest soup I have ever eaten. Maybe even one of the best things I’ve ever eaten in general.

The soup wasn’t as creamy as I thought it would be (although after it sits for a while, it gets thicker) but it was still perfect.

First, start browning the meat in the large stock pot over medium-high heat. Add some salt and pepper as it cooks.

Meanwhile, melt your butter in the sauce pot on another burner over medium heat. After it melts, add in your flour and stir it up for about 30 seconds, then add in 1 cup of milk. Stir over the heat for about 4-5 minutes while adding in a little salt and pepper, or until it gets slightly thicker. Once it’s thicker, take it off the heat, and add in a cup and a half of cheese. Stir the mixture up until the cheese is good and melted in there, then set the pot with the cheesy sauce aside.

Back to your meat, once it’s browned, drain it, and put it back in the pot over medium heat. At this point you will want to throw in the taco seasoning and mix it up a bit in the meat. Throw in your Rotel tomatoes (undrained) and stir it up a bit more. Then add your black beans (drained and rinsed off) and stir it a bit more. You should have a good beefy/tomato-y/beany mixture. Now take your cheesy sauce and pour it in. Mix it up good, then pour in the rest of the milk (should be about 1-1/2 cups).

Turn the heat up a tick, and stir the mixture up good for about a minute, then turn it back down to medium and let it simmer for about 10 minutes. Make sure to stir occasionally while it simmers.

After that, it’s ready to serve. After you fill up a bowl, put a little dollop of sour cream on top, then sprinkle some of the rest of your cheese, and put some crunchy tortilla strips over all of that. Then you’re ready to eat the greatest soup ever.

No really, it’s the greatest soup ever.

Not sure what is next on the menu for me. I think now that it’s getting closer to football season, I might try a couple of types of dips. I have a good buffalo beer cheese dip I might try, or a spicy queso. Who knows?