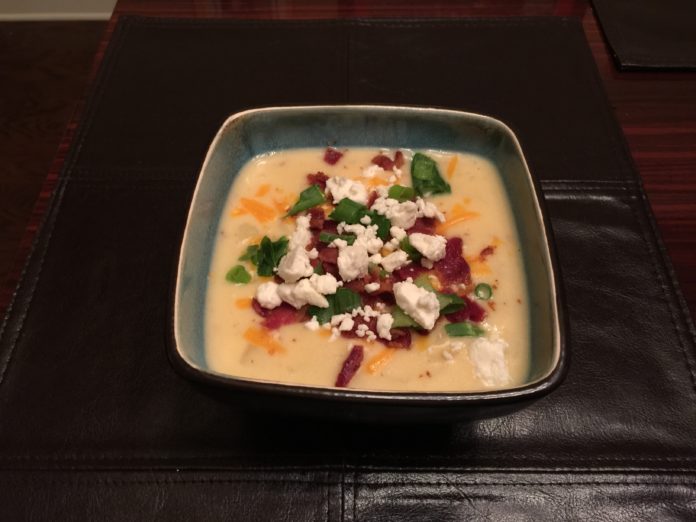 “Wait, didn’t Jon do this already?”

Yes, I did a version of potato soup that was really good when someone else made it for me, but I screwed it up big time. So now I am trying a different recipe, one that I half got from a cookbook, but also made it totally my own.

This was supposed to be a super light recipe, as in, not many calories. This was my meal for the day, so I beefed it up a bit, but not a ton. I also added a few ingredients that made it amazing.

I was discussing with my mom about fennel seeds for a tomato sauce I was thinking about making, and I didn’t know anything about fennel seeds. So she stopped in a store and got me fennel seeds, pre-crushed fennel seeds, and all kinds of cool spices and things that are Penzey’s brand. This is not a paid endorsement or anything, but this stuff is amazing.

Now, on to the soup, and how I used some of this stuff in it.

Stock pot (for the soup)
Skillet (for the bacon)
Whisk
Fork
Spoon
Cutting knife for potatoes
Measuring cup
2 large plates (for bacon to cool on, and to cook potatoes on)
Potato masher

Now, my biggest mistake is always not being prepared enough. The biggest reason I typically am not prepared is because I am hurrying. Last night when I made this, I had about 45 minutes between when I started the soup and when I was heading out to go to the movies. (By the way, Jurassic World gets an 8/10 for me, it’s fairly entertaining).

To start, the recipe I had loosely based this off of told me to pierce my four potatoes with a fork and stick them in the microwave for 13 minutes. The back of the bag of potatoes I got told me to cut them in half and stick them in, and to also peel them before I put them in the microwave. I’m not sure any of that is right. They came out hot, but didn’t really feel right. Not that I know what “right” is. Basically, cook the potatoes…however you normally cook potatoes. I was in a hurry, so the microwave seemed easiest.

Also, you can go ahead and cook your bacon now too, and let it sit while you do the rest of the soup. I just did it on a skillet like normal, but however you prepare your bacon – go for it. I recommend three slices, but I did four because I had one leftover piece, so I figured “why not?”

While those are cooking, start the soup. Pour your olive oil in the pot and turn the heat on medium-high. Once it’s heated up a bit, throw in your onions and garlic, and stir them up. Let them cook for about 3 minutes.

Then add your chicken broth in. When you do, stir it up a bit. Then measure out the flour you’ll need into a measuring cup or bowl. Then add a 1/2 cup of milk and stir it up with a fork or a whisk. This will mix the flour up before you pour it in. The biggest mistake I made last time was letting the flour sit at the bottom of the soup and burn. I think I did a little of that this time, but having it mixed up prior to pouring it in helped I think. After you pour in the flour/milk mixture, then pour in the rest of the milk right after it.

Bring it to a boil after you pour in the milk, and let it bubble for 1 minute, stirring often to keep things mixed up. This is typically where I let the flour burn. After you’ve stirred it for a minute while bubbling, take it OFF the heat. I left it on too long, which didn’t help matters, but at least it wasn’t bad enough to make the whole thing smell and taste like burned flour.

After you take it off the heat, immediately add 1 cup of cheese (save the other half for garnishing the soup), add your 1/4 cup of sour cream, and your salt and pepper. This is where I added the Penzey’s spices in. The beef base gave the soup a little bit of a hearty beef taste to it which wasn’t too bad. Chicken could also work well, I just had beef. I also threw in a little of the cheese sprinkle for some extra cheese flavor. I also used some on top of the soup as well after it was done.

Stir it all up until everything is melted and mixed in.

Now it’s time for the potatoes. I had them cut up a little bit, but not finely enough. So I cut them up a little more and added them in. Once you throw them in, take your potato masher and go to town in the soup. Mash those suckers until you feel like they are mashed up good in the soup. You still want texture, so don’t do it so much that you liquify the poor potatoes.

At this point, you’re ready to serve. Don’t take so long with everything after you take the pot off the heat that it cools down a lot. Go ahead and get to it with the remaining steps after you take it off and serve it so it stays warm. I was in a hurry from the beginning so it was fine for me, but just a word of warning.

Grab a soup ladle and fill up a bowl with the soup. Garnish with a sprinkle of cheese and a crumbled up piece of bacon (it makes about 3 servings of the bowls in the picture, so one piece of bacon for each works). Also add some chopped up green onions (I usually get the pre-chopped to save time), and also some feta cheese. The feta cheese is a little different than normal, but I think it added a nice flavor to the soup, aside from the cheddar cheese. I also recommend the Penzey’s cheese sprinkle on top of the final product. Gives a good, but different cheesy flavor without actually having more cheese in there.

And there you have it. Because I was in a hurry, I only had a finished product picture. It’s not quite as yellow as the version I did before because the version before basically called for a whole bag of cheese, and I used half of that this time to be a little healthier.

This soup was great, and I recommend it. I think if I open a restaurant, I have my first official item that is pretty much a recipe I made on my own after finding a few different recipes. It’s lighter than the other soup I made too. I tried to put it all together and see how many calories it was for a single bowl, and I think it was around 500. That might not be great, but it’s light years ahead of the potato soup I did last time which was cheese central and definitely was worse for you than this (not to mention that it tasted like a burned tire).

So what is next? I’m looking at a few pizza recipes, along with some more pasta. I’m going to Vegas on vacation, so it will be a couple of weeks before I get back to it. When I get back though, it’s time to get back in the kitchen!