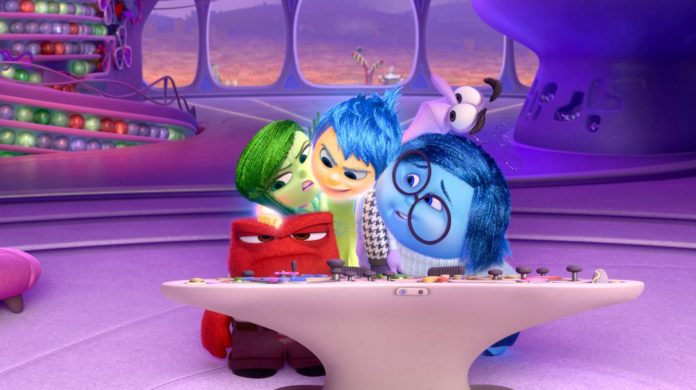 I went and saw Inside Out last night, only a few days after it had come out. I am not usually one to go see a movie on opening weekend unless I know it’s going to be so good that I have to go see it opening night or at midnight when it launches. Inside Out looked like every other Pixar original story, something that would be intriguing and innovative, and tug at your heartstrings as movies like Up, Toy Story 3, and others have done.

It was pretty good, but it’s not the tearjerker that some of Pixar’s movies have been.

Inside Out tells the story of the emotions that live inside of us every day, and focuses on the journey of a young girl named Riley who is forced to pick up and move from Minnesota where she has lots of friends and loves to play hockey to San Francisco because of her dad getting a new job. Riley is thrown into a swirl of emotions as she seems excited, yet scared about the new adventures that lie ahead.

As she gets ready for her first day of school, Sadness (Phyllis Smith – The Office) ruins a happy memory by touching it and Riley cries in front of the class. Joy (Amy Poehler – SNL, Parks and Recreation) tries to fix the memory in Riley’s head, but her, Sadness, and Riley’s five current core memories are sucked out of the control tower and dropped into long term memory, a vast land full of Riley’s lifetime full of memories that surrounds the “Memory Dump”, an abyss where memories go to be forgotten.

This leaves only Fear (Bill Hader – SNL), Disgust (Mindy Kaling – The Office, The Mindy Project), and Anger (Lewis Black – Comedian, The Root of All Evil) to guide Riley through the day.

The movie then takes a turn down a dark path as Riley struggles with depression and loneliness as the three leftover emotions in her head make her lose her best friend and alienate her family. It’s at this point that the movie can be taken one of two ways:

If you’re a kid, it turns into a magical adventure for Joy and Sadness to find their way back home to the control tower.

If you’re an adult, you watch as a child’s memories are destroyed and as she struggles to get through her average day. The movie goes back and forth from Joy and Sadness trying to get back home, to the three remaining emotions ruining Riley’s life without Joy to lead them.

The parts that revolve around Joy and Sadness are funny, bright and entertaining as they go on a perilous journey against the clock. But when things get brought back to real life, you see a young girl struggling with emotions that we have all felt at one time or another, and it gives an imaginative story to how we all have changed in our lives, whether for good or bad.

It wasn’t as big of a tearjerker as it was made out to be when the first screenings were talked about. However, it does feel very real, and it makes you completely change the way you look at your emotions. I saw one review talk about how it was like Inception, but for kids and with less complicated rules. I’d say that’s a fairly accurate comparison.

I wish they would have spent more time on Riley in the real world, and less on the slapstick humor of Joy and Sadness trying to get home. It is a kids movie after all, so I understand why you would want more of the “kid” formula in there compared to the “adult” formula.

Pixar rarely disappoints to bring a new “kids” title to the big screen that entertains all ages and makes us all think in our own way. This movie definitely falls in line with the rest of the original Pixar IP’s as one you must see.

I also have to give a standing ovation to the voice acting, because I don’t know if I have ever seen such perfect voice acting in any movie ever. Phyllis Smith should win an Oscar just for her portrayal of Sadness, while Lewis Black and Mindy Kaling should be right behind her. All five are perfect for their roles, and it made the movie that much better. Voice acting seems to get lost in the mix when we think about brilliant acting performances, but this film proves why finding the perfect voice is so important.

I don’t usually get super emotional at movies. This movie didn’t really have me emotional, more so than it really had me thinking. It’s not like the first scene of Up, or the end of Toy Story 3, but it’s up there. I also think the Academy of Motion Picture Arts and Sciences should probably go ahead and give director Pete Docter and producer Jonas Rivera the award because it probably won’t be topped with anything else I’ve seen coming out.

Pixar delivers yet another wonderful original story that amazes people of all ages and makes us think about our own lives in a different light. Not the tearjerker that Up or Toy Story 3 were, but still a solid movie that should score Pixar yet another Academy Award.