Home Entertainment Game of Thrones Death Pool update, episode 5 thoughts and where to... 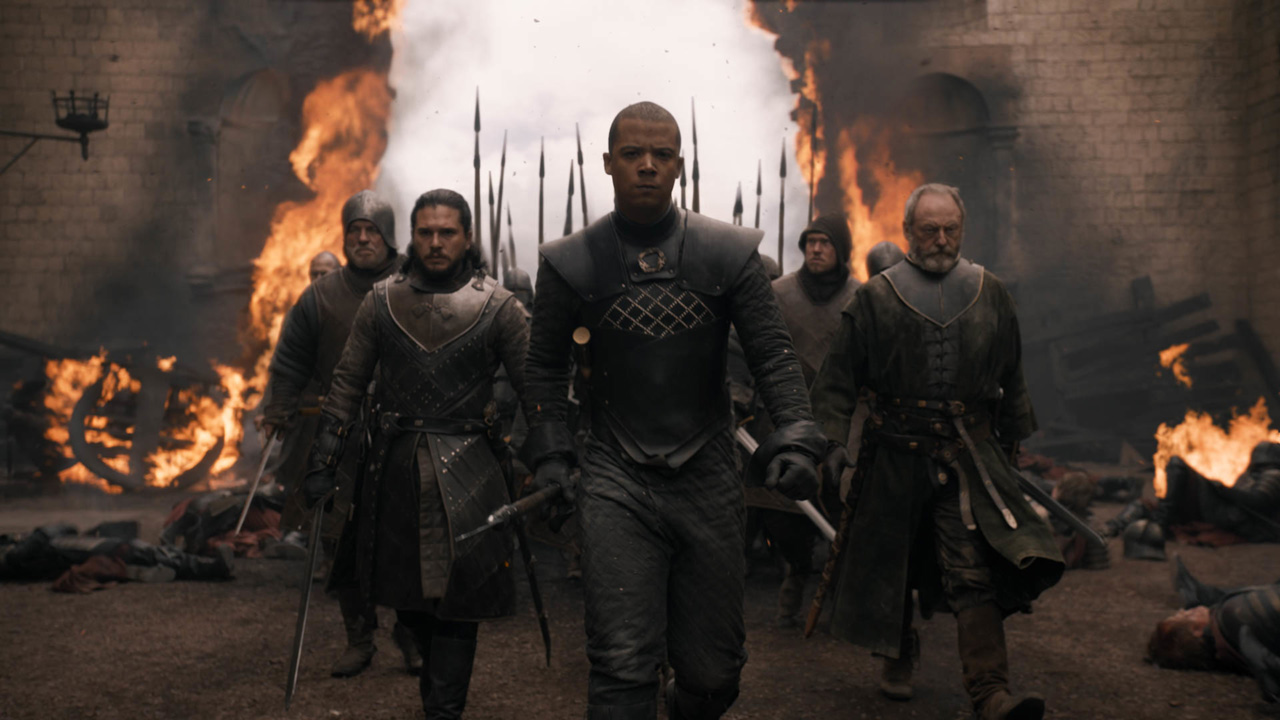 What an episode. What a final battle. What a turn of events. Everything has gone full on insane and there is only a little over an hour left to enjoy this journey.

If you don’t like what you saw on TV in episode 5, then just stop watching TV altogether because you don’t know what you’re talking about.

Not much of a recap to give, you just need to go watch the episode.

The preview doesn’t show much other than Daenerys has obviously taken control for now. I guess that means she technically was on the throne for a little while even if she doesn’t end up there at the end of the episode.

Last week, I thought we might be heading toward a happy ending with Jon and Dany, but now I am thinking the exact opposite since she went all Mad Queen on everyone. If I had to guess, I’d say Jon kills Dany and then exiles himself, or maybe goes north with Tormund and Ghost to get away from it all. I think he’s so disgusted with everything he just doesn’t want to be a part of it anymore.

Dany can’t end up on the throne because no one will support her except for the little bit of the Unsullied army she has left. If anyone serves her now, it will be out of fear, not loyalty. I just don’t see the show ending that way. She’s burned all of her bridges (pun intended) and can’t end up winning in the end.

With that said, here is how I would rank the potential people on the throne at the end of the episode:

1. Bran Stark – It seems like neither Jon nor Dany will end up there now based on what I said above. That leaves basically three bloodlines to end up on the throne – Stark, Lannister, Baratheon. I feel like Tyrion will end up going down regardless because A) he told Varys that Jon Snow was actually a Targaryen and B) if Dany is gone, he will be arrested/executed for helping her to get to this point. Even if he doesn’t get in trouble, I don’t see him being the king.

I feel like Gendry is just a side character for a reason and will be perfectly content ruling Storm’s End (which I said last week).

That leaves the Starks. However, for a Stark to be on the throne, they will have to essentially be “chosen”. I don’t see Sansa being chosen, nor Arya (who wouldn’t want it anyway). Plus, I see them going the route of it goes to the eldest male. So Bran is it. He’s the smartest of everyone due to his Three-Eyed Raven skills and is probably the wisest to be on the throne. He just needs a good protector since…you know…he can’t walk.

I could also see this whole thing playing out perfectly in Bran’s mind to make him the king on purpose.

2. Sansa Stark – For the reasons above, but because she’s the eldest Stark (despite not being a male) or because Bran doesn’t want it.

3. Gendry – No way this happens, but he does have the bloodline…and isn’t crazy.

4. Jon Snow – I think he’s so sick and tired of all of this that once someone gets on the throne (especially if it’s a Stark), then he’ll call it a day and will leave. But if he gets the overwhelming support then he could do it. Or if he does kill Dany as the current queen, then I guess he can claim it, but we all know he doesn’t want it.

5. Tyrion Lannister – I have him above Dany but only because he wasn’t actually the one burning everything and at least tried to make it stop when the bells rang.

6. Daenerys Targaryen – I mean, I guess she could still sit on the throne, but I just don’t see it.

I think it’s pretty clear that Jon and Daenerys aren’t going to have a king/queen baby. Jon is done with this stuff and Dany has gone mad. Could she be pregnant? Maybe, but if I don’t see Jon/Dany on the throne, then I bet their maybebaby isn’t going to be there either.

If you’ve missed it, we have a little death pool going among Jox Primetime and a few other people around the office.

The tiebreaker is who kills Thanos, but for spoiler reasons, I won’t put who got that right until the end of the show so that Endgame will have been out for a few weeks.

– There are a total of SEVENTEEN (17) dead “main” characters after Episode 5. The additions this week were:

Varys – Got burned by Drogon for snitching
Euron Greyjoy – Got killed by Jamie in a fight
Qyburn – Tried to keep Cleganebowl 2019 from happening so the Mountain crushed his head against the wall
Sandor “The Hound” Clegane – Jumped off a building with his brother
Gregor “The Moundtain” Clegane – Got tackled off a building by his brother (is the Cleganebowl a draw at this point?)
Jaime Lannister – Was probably mortally wounded by Euron anyway, but got to Cersei and then got crushed by the falling building
Cersei Lannister – Stayed WAY too long in the Red Keep and now she’s buried underneath it 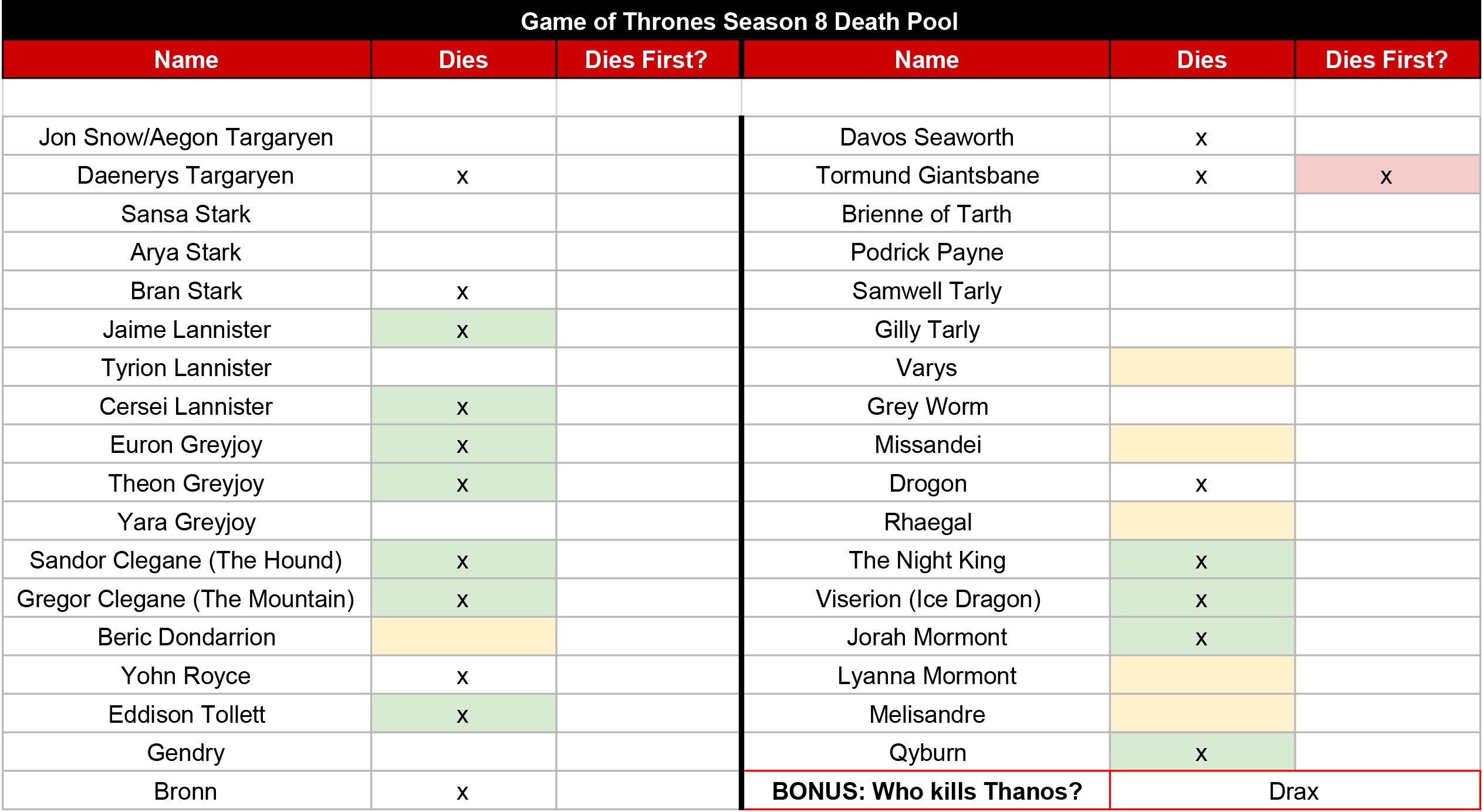 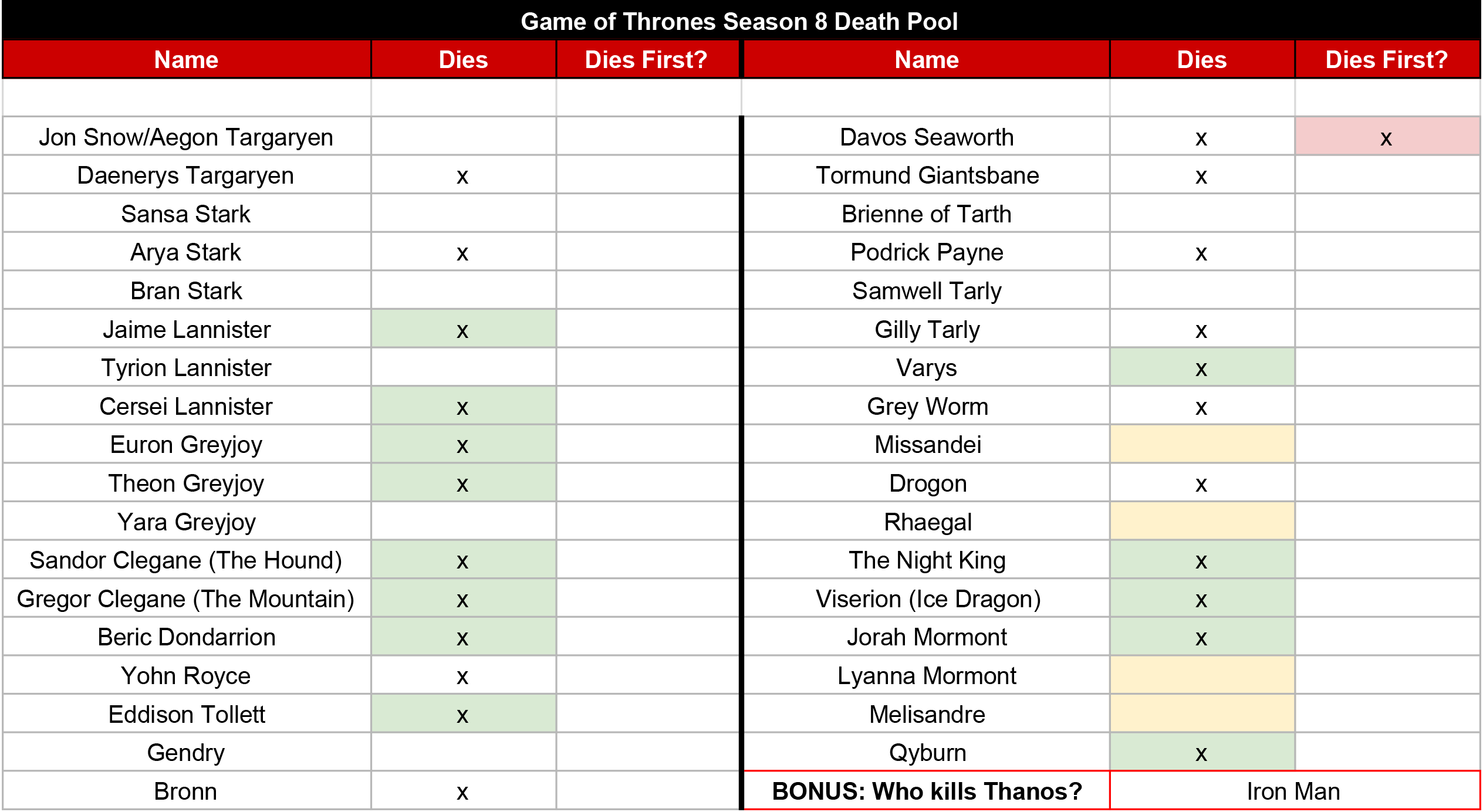 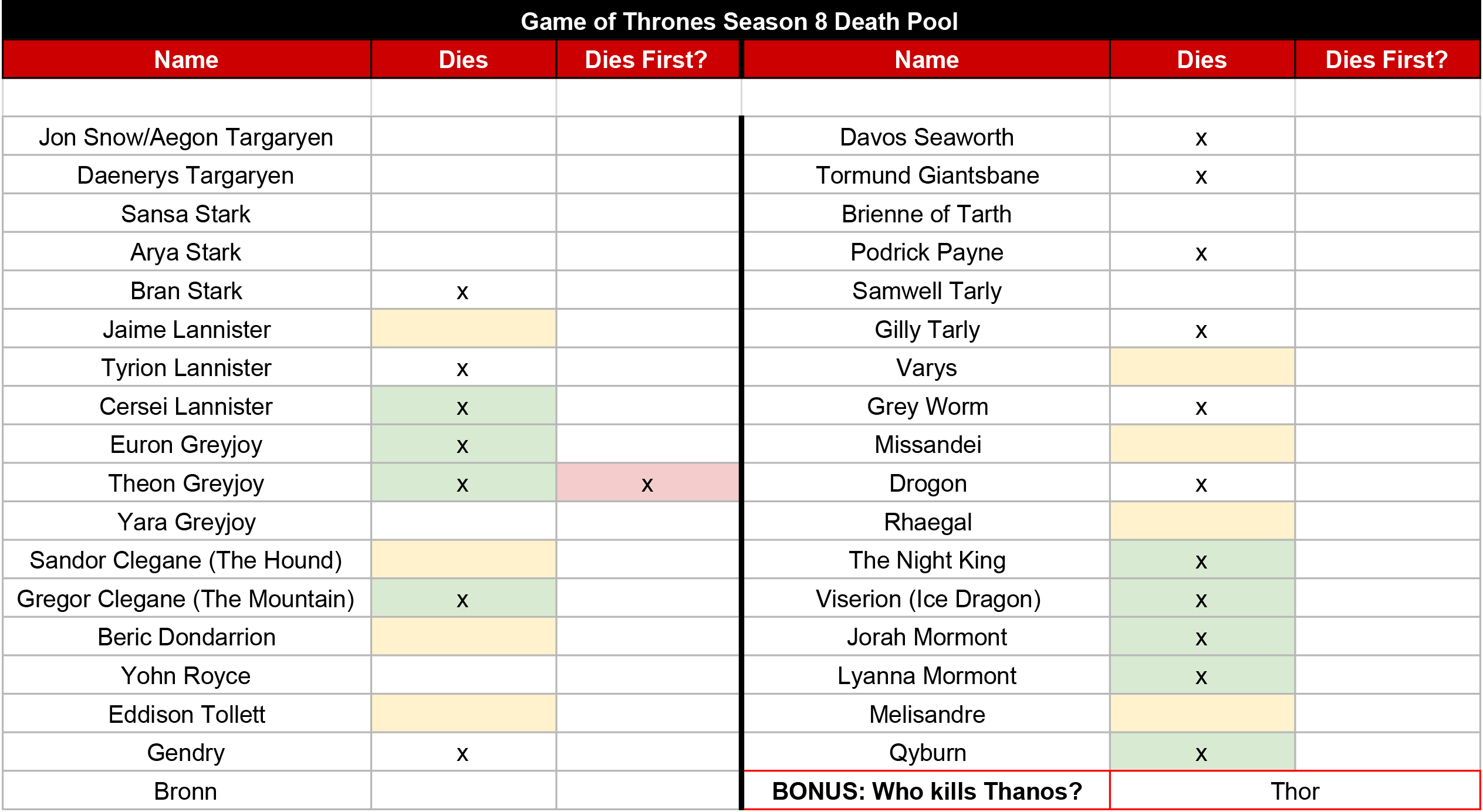 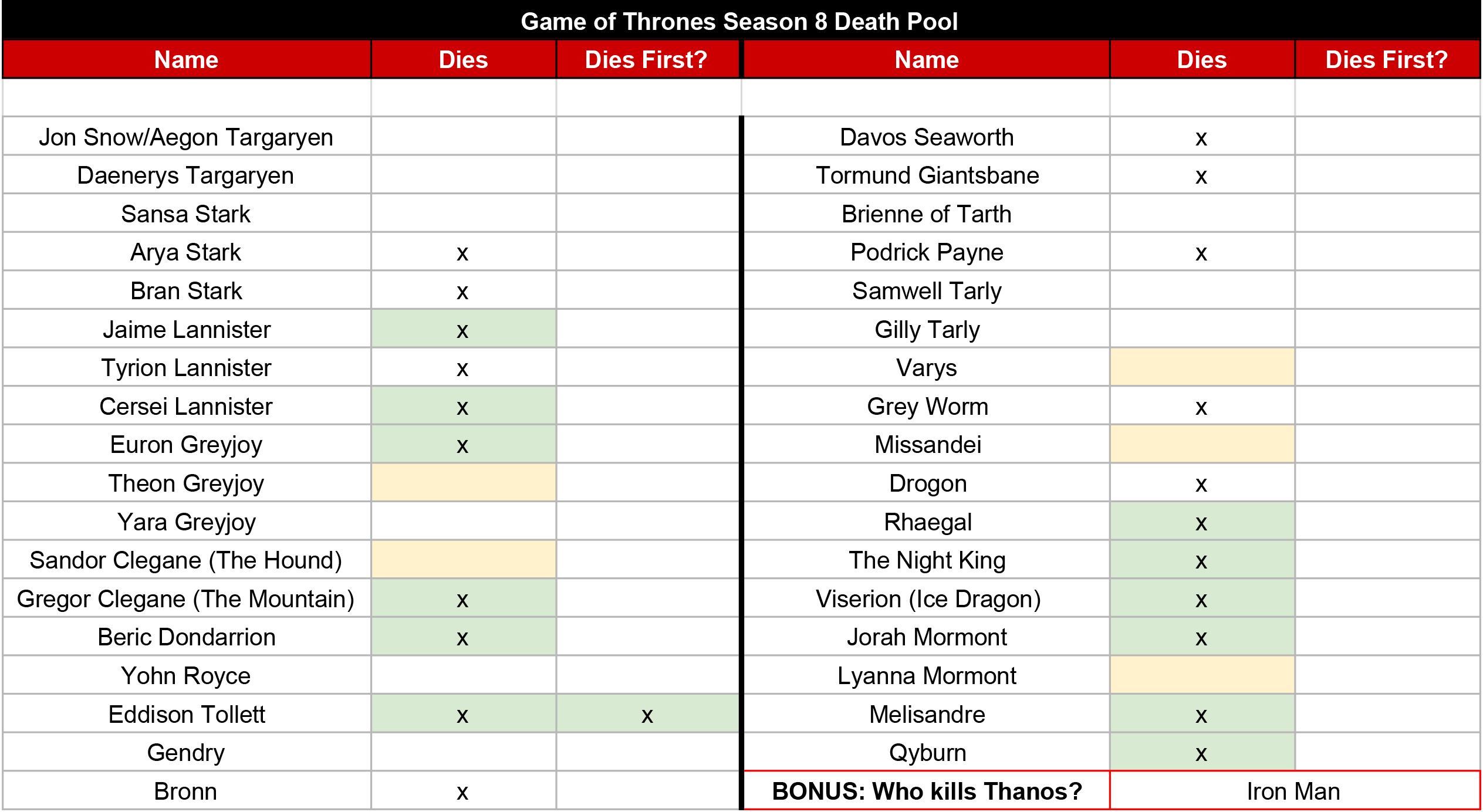 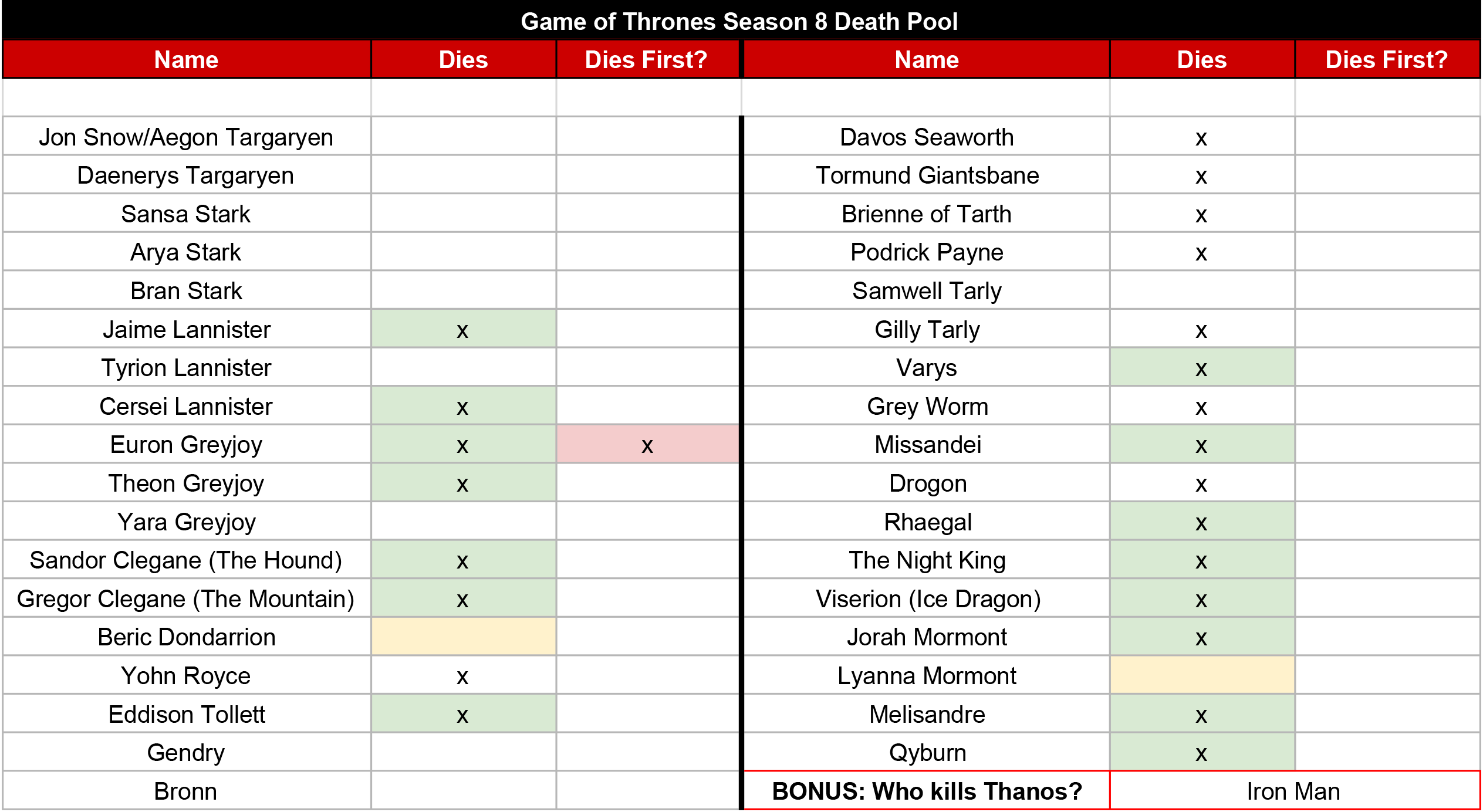 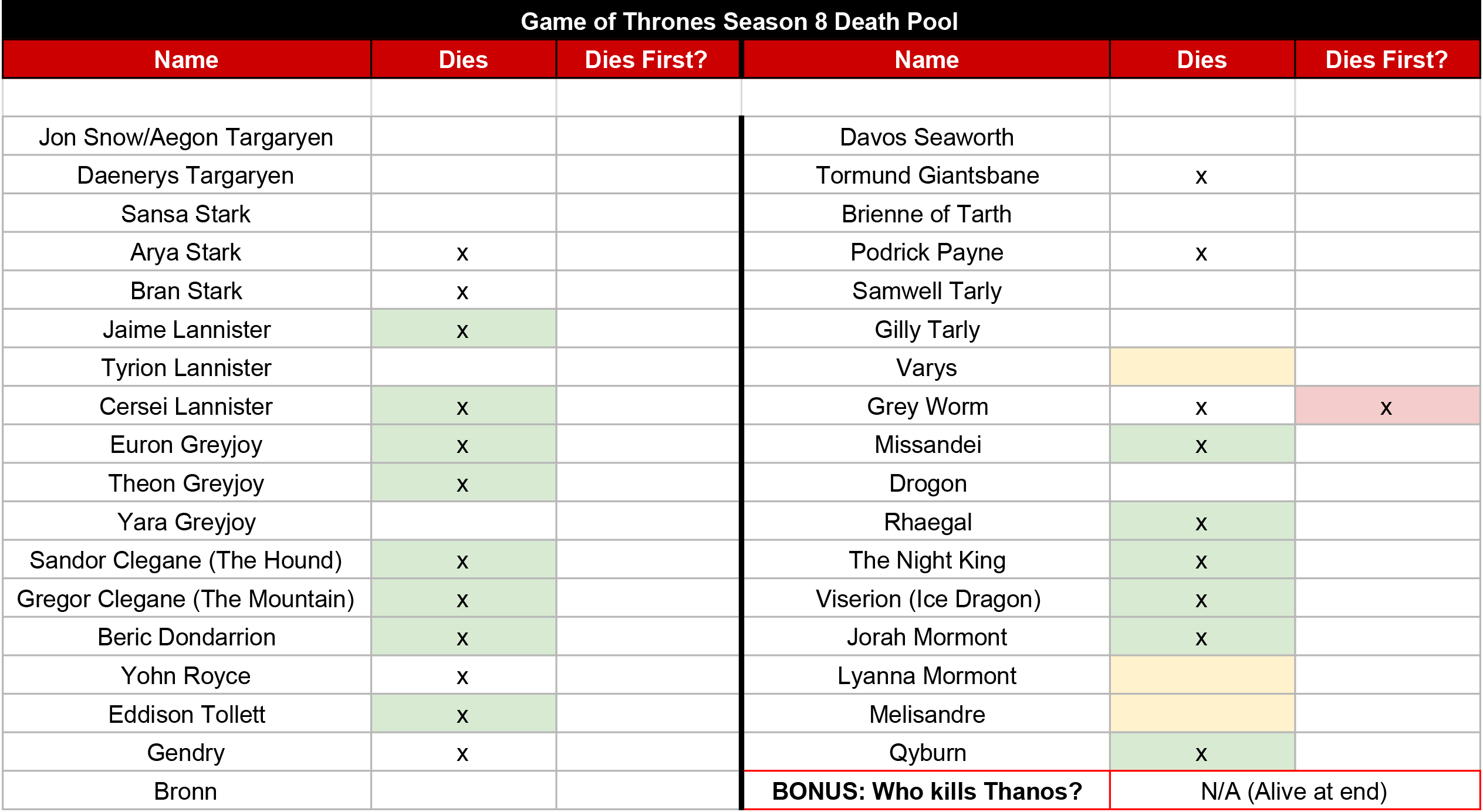 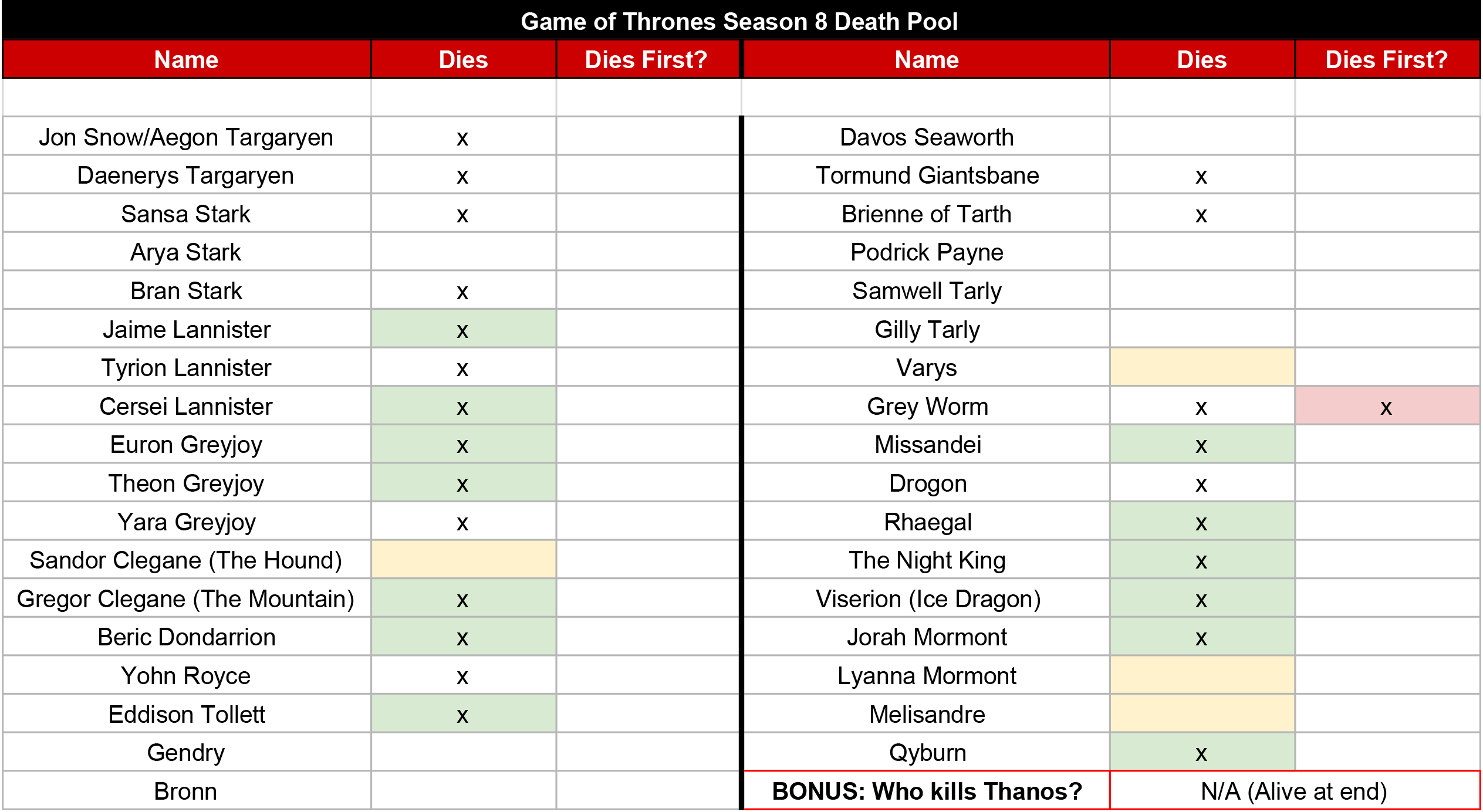