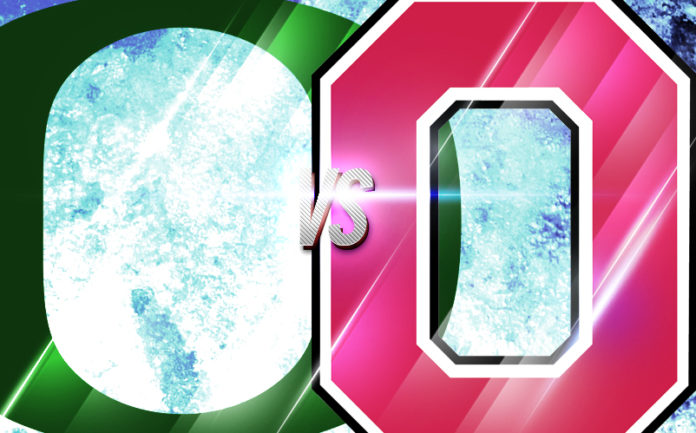 It’s finally here, the first national championship of the playoff era. This is something we’ve all been anticipating and waiting for over the last couple of decades. It’s finally here…but the SEC is sitting at home. So while that is kind of depressing, we’ll move on anyway and at least turn the TV on to see who is winning, and then flip back and forth between the game and Monday Night Raw.

But in all seriousness, here are the match-ups to look for and keys to the game.

When Oregon has the ball…

Oregon has the best player in the game right now, and perhaps one of the best ever to play quarterback in college. Marcus Mariota is as fine an athlete as you can have, and he will be key in making sure Oregon delivers on what everyone assumes will happen. The Ohio State defense isn’t anything to scoff at. They did hold Melvin Gordon and Wisconsin to 0 points, but they also gave up 35 to Alabama, and haven’t faced an offense even close to this dynamic before.

When Ohio State has the ball…

Cardale Jones has impressed everyone . Only two games into his career as a starter and he’s grabbed wins over Wisconsin and Alabama in two post-season games. He can keep that streak going against Oregon who hasn’t been known to have the best defense. Oregon ranks 102nd in total defense this season, and that includes most of a season with Ifo Ekpre-Olomu. With him out, this defense could be beaten up a bit more than usual. Despite beating Florida State by 39 points, they still gave up over 520 yards. Ezekiel Elliott will be a key factor as well because Ohio State will need a solid running game to pound it out against Oregon.

Oregon ranks 12th in field goal percentage, while Ohio State ranks 89th at 65%. The Buckeyes were 2/2 against Alabama, but were inside a dome. They have that luxury again tonight, so that should help them a bit.

In return yardage, neither team has been dynamic, with Ohio State being ranked 63rd and Oregon 71st. In a category that was led by UAB, both of these teams have been relatively quiet, although Ohio State has returned one for a TD and Oregon has two.

Punting is something that put Ohio State in a bad position against Alabama and JK Scott who led the league, but they’ve got a good kicker of their own. They rank 6th in average punt yardage, while Oregon is 107th. That could be crucial in a field position battle, should it come to that and be lower scoring than most think.

Overall, punting should not be that big of an issue since these are two dynamic, high scoring teams. So I have to give the advantage to Oregon who leads in FG percentage. A made FG against a miss could be crucial tonight.

Mark Helfrich has done what a lot of people thought couldn’t be done – replace Chip Kelly, who was a superstar with Oregon. He has continued the work of Kelly, and made sure that Oregon is still a high flying offensive juggernaut. Although a lot of that is thanks to Marcus Mariota. We’ll really see what kind of coach he is once Mariota is gone.

On the other side, you have one of the most successful coaches in the game with Urban Meyer. He’s come a long way from sad pizza and turned the Ohio State players into a team that truly thinks they can win. They did it against Alabama, who no one thought would lose, and are going to try again tonight. You have to think there is a huge advantage for Meyer who has been in this position many times before, and played in major games many more times than Helfrich.

That’s a good question. As of this post, the line is Oregon -6, and that has been dropping from the opening line of -7.5. Ohio State believes they can win, and that speaks volumes to how they are prepared for this game. They did it against Alabama, and they can do it again.

Oregon has dominated everyone, despite their one early slip up against Arizona. But we saw what happened when they had a shot for revenge against them in the Pac-12 title game. They went into a match-up in 2010 against Auburn and everyone thought it would be a shootout between a high flying Oregon team and the Cam Newton-led Tigers. The final score was much lower than anticipated at 22-19 on a game winning field goal.

Look for the same thing tonight, but with a happier ending for Oregon. The over/under is 73.5 as of now, and that means each team is scoring mid-30’s. I say that is an accurate o/u and I wouldn’t want to be betting that. It won’t be super high scoring, it’s going to be a close game in the 30’s. Oregon won’t be able to cover, it will be a close game, but they win by a field goal.