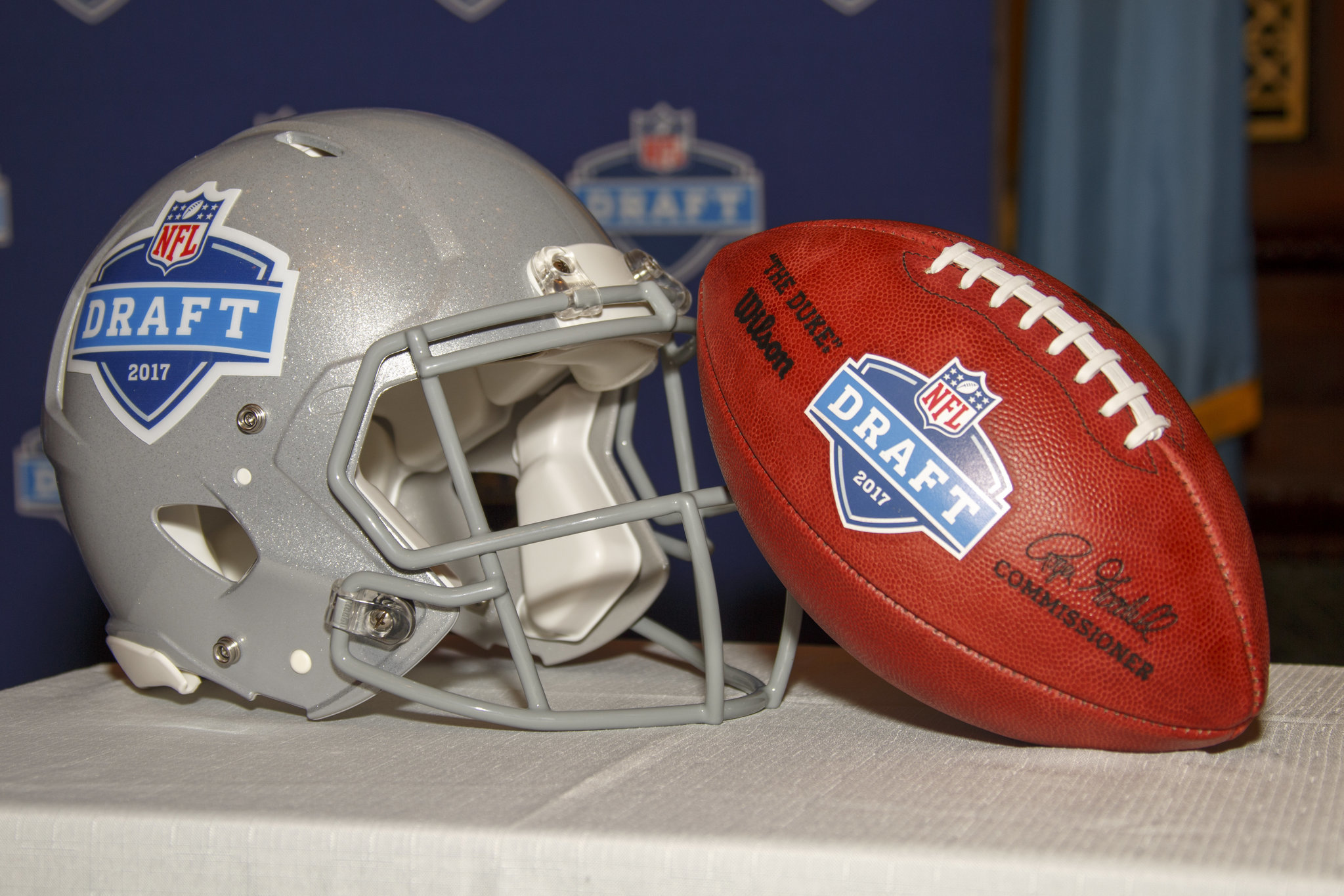 The draft is almost here and as we get ready to settle in and watch the college stars of yesterday get selected to become professional stars of tomorrow, here is how I feel things will go down after talking about it on Primetime and researching it for the last four months.

There will be a trade most likely that I haven’t accounted for, and if so, then that blows up what I’ve done. I am more in the mindset of the Browns going QB first, then getting a decent DE not named Myles Garrett afterwards.

I didn’t predict any trades below, because the only obvious one out of the gate is the Browns and I don’t know that they do it.

So here are the first 32 picks in this year’s NFL Draft:

I have said on Primetime since the first mock drafts started coming out that I wasn’t a big fan of the “Myles Garrett is light years ahead of Solomon Thomas and Jonathan Allen” bandwagon like most national pundits think. With that, I have said for months that it wouldn’t shock me at all if the Browns go with a QB first to ensure they get the QB they want. Without trades, the best thing they can do is get their QB first and end up with Derek Barnett (who I also think is in the discussion as potentially better as Garrett) at their #12 pick.

However, Mary Kay Cabot is reporting that the first pick is done and it will be Myles Garrett.

If Myles Garrett drops at all, the 49ers will take him. They wouldn’t mind having a quarterback or other players either, but the play has been for Solomon Thomas for a while now, so it’s a no-brainer that they would go with the guy most think is easily #1. However, with it being reported that Garrett to the Browns is a done deal now, I’ll jump on Trubisky going #2. He will go early.

The Bears will 100% go with a defensive player here. I could see Solomon Thomas go here or Jonathan Allen. But Jamal Adams is the best pick in my opinion.

The Jags seem committed to Fournette from everything I’ve heard and there is no fear of any RB going earlier than fourth. Tom Coughlin will get an amazing running back that can contribute from day one.

This is the one area the Titans need help more than anything, and even though health concerns have popped up about Lattimore, they would dumb to not pick a defensive back in the first round. They have the #18 pick as well, and could potentially do something there with Marlon Humphrey, Tre-Davious White or another CB if they didn’t do it here.

They have teased wanting Trubisky and the only way the Browns will get him outside of picking him first, is to trade with Tennessee (who has two first round picks, but no second round picks) or trade right here with the Jets. If that trade doesn’t happen, and I’m not sure it will, then I would look for Howard to go here. He has been teased at 4 and 5 with the Jags needing offensive weapons and the Titans wanting another pass catcher, but the Titans can get one at #18.

They will be tickled to see Thomas fall this far (Jonathan Allen too). If Jamal Adams is here, I’d expect that, but it depends what the Bears do and if the Titans decide to use their first pick on the top talent available instead of a position need.

This seems to be the consensus here with Fournette off the board. They could use the running back help with Jonathan Stewart and Cameron Artis-Payne not getting it done.

Some have had Reuben Foster here, but with Allen available and if the quarterback wars go on ahead of this pick, then Allen will fall no further than right here.

I see some people putting Haason Reddick right here, but come on – Foster is easily the best linebacker in the draft and if anyone else gets picked it’s because of his combine woes.

The Saints will definitely take a defensive player here and if any of the top guys above have dropped, they will pull the trigger on those instead, but Charles Harris and Derek Barnett are the best of the rest at this point and it’s between those two for the Saints and Browns (if the Browns don’t trade).

I do think you can make an argument for Barnett being the best defensive end in the SEC last year (and perhaps the nation). This is all assuming that Cleveland doesn’t trade up for a quarterback and takes one first. If a trade happens, it will no doubt happen with Tennessee at #5 so the Titans can fall back and pick at #12 and maybe get a second round pick out of the deal. I’m betting a trade doesn’t happen and they decide to go with the plan I’ve been preaching for weeks – a Trubisky/Barnett first round instead of a Trubisky/Garrett first round.

There are many ways this pick can go, and I imagine it will either be Hooker (to replace the safeties they lost in free agency) or perhaps a cornerback – or they will go with Patrick Mahomes, which has been the popular pick from Texas Tech. But he is a beneficiary of playing in an offense that allows padded stats, I’m not convinced he can play in the NFL to the level teams will want him to.

If the Titans make the trade down to 12, I think they will take Williams. If not, then he could go here to give Carson Wentz some help along side Alshon Jeffery.

With Reuben Foster off the board, Reddick becomes the next linebacker of choice in my opinion and they need defensive players. You could possibly get a defensive end here if Derek Barnett were to fall or if they feel that is a bigger need and went with someone like Takkarist McKinley.

The Ravens are in a position where they would like to get some help for Joe Flacco either in protection or catching the ball, but a top defensive player would be too good to pass up either. If Reddick is available, they take him here. If not, they go offense and I think the best bet is a lineman. Western Kentucky’s Forrest Lamp is a popular pick here as is Wisconsin’s Ryan Ramczyk, but I feel like Robinson is the pick here after some rumblings I’ve heard recently, plus with Ozzie Newsome’s connection to Alabama.

Also, don’t be surprised if there is a trade here to move back a few spots and pick up some later draft picks. They don’t have a ton this year and could still get a lineman later in the round.

McKinley gives them a good pass rusher, but has some shoulder issues. Dalvin Cook has been a popular pick here as well and I can see that happening. They would take a top safety like Malik Hooker if he fell this far, but I don’t think he will.

The Titans need a pass catcher and a cornerback in this first round and I think they wise up and take a CB early and then can have their pick between John Ross or Corey Davis here at #18. I don’t see them trading this pick, but rather the #5 pick if they do make a move (since it’s more enticing and the Browns could make the move).

The Bucs seem to like FSU players, and with Doug Martin missing a few games early in the season, perhaps Cook would work for them. There are many places Cook could go in the first round or he could miss out altogether and move to Friday.

Offensive line help is needed and if Cam Robinson is gone, they will go with Ramczyk. They might go with him over Robinson anyway.

He’s been playing college ball in the state and is available to provide another pass catcher for the Lions. If he’s available, he could go here. Also look out for David Njoku if he’s available in this huge tight end class.

The play is defense here and with plenty of the top guys already gone, why not go after the brother of one of the best in the game right now? Some think Reuben Foster could fall all the way to here, but I don’t see that. Maybe McKinley as well if he falls.

Never mind his low Wonderlic score (9/50), he is an athletic lineman and protection for Eli always helps.

Another cornerback off the board and perhaps not the last in the first round. King can start day one and has good size. The size is what gets him taken over Marlon Humphrey.

The play has been Cam Robinson for a while, but they need a QB. The question is – which one should they take? I like Watson better than Mahomes (for reasons I mentioned above) and I think Bill O’Brien can utilize him.

It’s between an offensive lineman and cornerback here. There are still questions surrounding Richard Sherman possibly being traded and DeShawn Shead is injury prone. So they could go with White or Humphrey here, or perhaps Forrest Lamp (or if Robinson falls for whatever reason).

Derrick Johnson is getting kind of old and Davis could fit here. There are some other names like Dalvin Cook who, if they fell this far, the Chiefs might take. Also keep an eye on Evan Engram as more of a wide receiver instead of tight end (since they have Travis Kelce).

This will be a defensive draft for the Cowboys and they may want Tre’Davious White over Jackson, but Jackson and Humphrey will available here. Jackson has a lot of upside, but they could potentially pull the trigger on a pass rusher though.

Eddie Lacy is gone, as is James Starks and they need a better option than Ty Montgomery if they want to be successful. Kamara was a guy some thought might go at #24 to Oakland but with Lynch that won’t happen so why not Green Bay?

Engram is an interesting “tight end” because he’s such a good pass catcher and essentially plays a wide receiver. He could fit into Todd Haley’s offense and be a big time play maker.

Why not get another piece that can help protect the NFL MVP? Lamp is a guy that almost no one has dropping this far, but if he does, Atlanta could pull the trigger on him. Another big name right here is DE Jordan Willis from Kansas State to beef up their young defense, or even perhaps a big time WR if one of the ones I’ve listed off so far fell all the way to #31.

If Jackson is available, they may take him. Marlon Humphrey has the talent to be a good NFL corner. I’ve heard Patrick Mahomes here as the future QB to learn behind Drew Brees, but once again, I just don’t see it. I could see Mahomes dropping far enough that either the Saints, or Cardinals could get him in the second round. So i’m sticking with a corner for now and if they get him – then great. If not, they will wait for their future quarterback (or go with a Nate Peterman down the line).