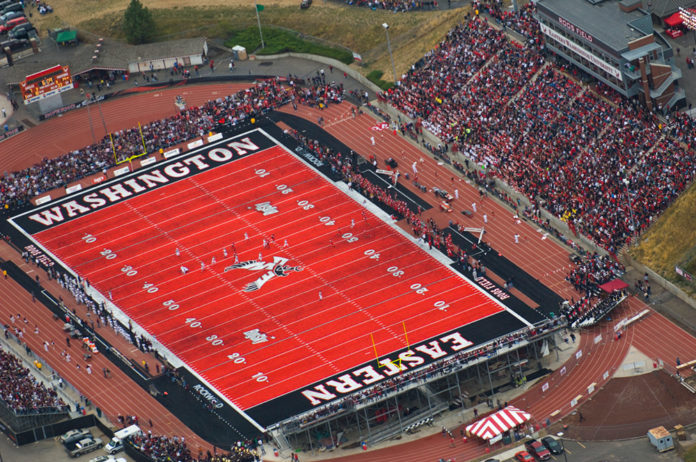 One of the major offseason stories so far in college football is the transfer of Vernon Adams from FCS powerhouse Eastern Washington (and home to the wonderful red turf) to Oregon where he is assumed to be the next in line after Marcus Mariota has left for the NFL.

News came out a couple of days ago that EWU coach Beau Baldwin banned Adams from using the team’s workout facilities because he was no longer a part of the team and is going to Oregon (who is playing Eastern Washington next season).

“We’re not rolling out the red carpet around here for a guy that’s playing against us game one,” Baldwin told ESPN 700 in Spokane. Adams is still enrolled at EWU and will graduate this spring so that he can transition to Oregon for graduate school next season.

He told ESPN, “We’re Division I like the other level. Our guys need to start and finish at the same school. We cannot be perceived as a farm system or Triple-A ball club or anything like that.”

So basically Ash is saying that players shouldn’t be allowed to take advantage of opportunities and move up to improve their NFL status, and educational status.

First, let’s look at the educational part of this. Everyone can say that FBS players don’t care about education (*cough Cardale Jones*), but the reality is, no matter whether you are an athlete or a regular student, if you go to grad school, there is a good chance you will wind up at a different school. Graduate programs are more restrictive, and many schools don’t offer the same grad programs as undergrad.

Second, when it comes to players transferring, it comes back to the same questions that have arisen in the past when there have been transfer issues. The rule allows a player who has graduated to transfer an play immediately, whereas players who haven’t graduated have to sit out a year at an FBS school.

If Oregon called Coach Baldwin or Coach Ash and offered then $4 million a year, would they say “no thanks, our school isn’t a farm system for coaching at a higher level” and decline? What if a player from an FBS school was a stud, but not getting enough playing time due to an even bigger stud playing in front of them, and he wanted to come to an FCS school? Would they deny him?

The quote that kills me is when Ash said “We’re Division I like the other level.” He can say that all he wants, but in football, FCS isn’t even one step down from the top, it’s two steps down. I’ve said for years that the FBS should be split in two, but there are really three levels of football in “Division 1”.

There are the Power 5 schools, which are the only schools that can actually compete for an FBS championship.

Then there are the Group of 5 schools that can only play for a bowl game, and nothing but a conference championship.

THEN there is the FCS, where the levels can be split even further with how the SWAC, MEAC, Ivy League, and Pioneer League operates.

If you really want a good idea of how things really rank, this is basically how it’s split up:

So I don’t know what Ash or Baldwin are complaining about, they need to just be happy with what they can get, and Baldwin needs to be glad he had Adams while he did. To try and lock kids into only playing at the level they were at when they graduated high school is ridiculous. Did the coaches have a hand in growing these players into better athletes? Of course they did, and that won’t be forgotten.

Eastern Washington will lose to Oregon, even if they had their stylish ball boy playing QB. Yet they will still leave the state of Oregon with a 6-figure (maybe 7, I’m not sure) check that will help fund their entire athletic department. I’m against that as it is, but they don’t seem to mind taking that check. Consider it that Oregon is paying you all that money so they can take your QB for one year.