Going in to Black Panther, I had high hopes for the movie based on two things. First, the way the movies within the Marvel Cinematic Universe have evolved at this point in the journey (see the evolution of Thor movies) and second, being able to watch another movie where director Ryan Coogler teams up with Michael B. Jordan.

One of those satisfied me, the other didn’t.

One of the biggest flaws within the Marvel Cinematic Universe has been it’s villains. Sometimes from a story perspective, sometimes from an acting perspective, but almost always everyone goes back to Loki as the only villain that is worth anything because he means so much to the story whereas other villains are a dime a dozen and aren’t really there for a reason. This movie gets the villain right for the most part, and Killmonger is brilliantly acted by Michael B. Jordan, but I am disappointed in the lack of “big picture” approach to the MCU, including with Killmonger himself.

Now, let’s go ahead and get this out of the way before I go any further. Yes, this movie was really good. Yes, this is a significant cultural moment. No, the negatives I’m about to say doesn’t mean it was a bad movie.

With that said, I do have some gripes about the movie from the overall MCU standpoint, and this journey that we’ve been taken on for the last decade or so. While most of what Black Panther offers is great, it doesn’t do enough, in my opinion, to advance the MCU. After a prologue to help set up the story of this movie, we find out that it starts a week after the events of Captain America: Civil War. In that film is when we are first introduced to T’Challa (Chadwick Boseman) after his father T’Chaka (John Kani) is killed in an explosion. That leads to him taking the mantle of Black Panther to try and avenge his father’s death.

The movie takes place right after that as T’Challa is set to assume the throne in Wakanda. I won’t get into all of the details so that you can go in somewhat clean, but the villain of the story ends up becoming Erik “Killmonger” Stevens (Michael B. Jordan), who is set on overthrowing T’Challa to fulfill his father’s plan of sharing Wakanda’s weapons and technology with people of African descent around the world to conquer their oppressors.

What we get in the movie is a villain who only wants what is right in his mind. He has a vision and he enacts a long term plan to achieve that vision. His cause is somewhat noble, even if his approach isn’t the best. We come to care about the villain almost as much as the hero. That part was great, and it was supremely acted by Michael B. Jordan.

But I feel like there still could have been more, and I partly blame the timing of the movie and where it falls in the cinematic universe. This movie should have either been done differently, or done well before now (I prefer the latter).

WARNING: SPOILERS FROM HERE ON 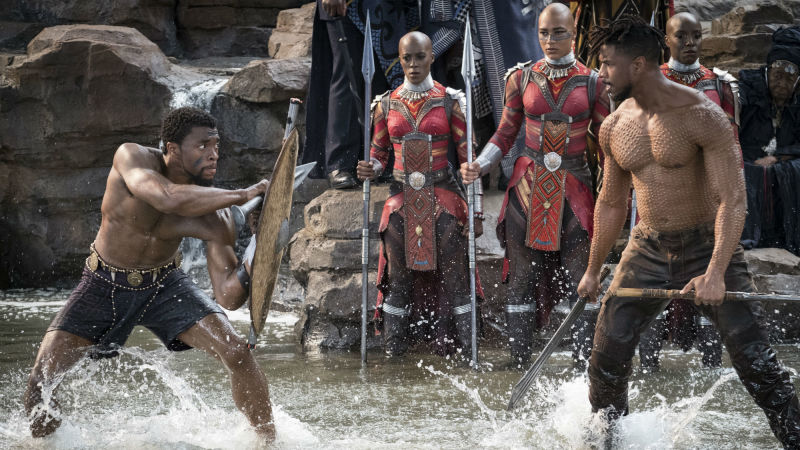 When we left Wakanda after the events of Civil War, Captain America was in Wakanda to put Bucky Barnes in cryogenic sleep until they could find a cure for his brainwashing. Yet throughout this story Captain America nor Bucky are nowhere to be found (at least in the main movie). Wakanda is in the process of being overthrown, including help from enemies of the Avengers from prior movies such as Ulysses Klaue (Andy Serkis) who sold vibranium, the source of all of Wakanda’s advanced tech and weaponry, to Ultron. Yet when old enemies appear, the rest of the heroes are nowhere to be found.

Now, I completely understand not having to have the other heroes come in and save the day, because that makes it look like Black Panther couldn’t get the job done himself. However, you can’t show the last location of multiple heroes in Wakanda, then tease that a large chunk of Avengers: Infinity War will take place in Wakanda as well, yet they are absent completely in this movie. It also doesn’t help that Black Panther is leading the charge in a large portion of the Infinity War trailer, yet we are meant to think that he is dead for part of this movie. They didn’t even show an Infinity War trailer before Black Panther, opting to only show the Ant-Man and the Wasp trailer, because they knew it would confuse people and spoil any potential deaths or story line that makes the bad guy seem successful.

The biggest disappointment in this movie to me was the death of Killmonger. I feel like he would be the perfect anti-hero in Infinity War and you could have kept one of the better villains (and actors) alive to see him continue to contribute to this great franchise. Imagine this – Killmonger’s whole ideology was that he would give Wakanda’s weapons to the oppressed people of the world and allow them to claim Earth as their own. So what happens when Thanos comes and threatens Earth as a whole? Then his plan would be thwarted and he’d be anti-Thanos just like Black Panther and the Avengers and they could join forces to protect the planet from Thanos, even if they had different motivations. Killmonger could have been the new Loki, and Marvel missed a chance by killing him in this film.

At the end of the day, Black Panther is a movie that we have needed for a long time for multiple reasons. While I’m glad we’ve finally gotten it, I feel like it did actually miss on some bigger picture issues, at least when it comes to the universe that it’s a part of.

With all of that out of the way, let me say the rest of the casting and acting was great, especially from Jordan and Letitia Wright, who was a standout in Black Mirror and will be in Ready Player One next month. I hope they pair her with Tony Stark (Robert Downey Jr.) in Infinity War as two wisecracking tech geeks that create the most amazing technology imaginable. I’d like to see Daniel Kaluuya get more involved in movies like this, after he already killed it in Get Out last year (another Black Mirror alum as well). Forest Whitaker and Angela Bassett actually somewhat take a backseat to the younger talent in this movie, but are great in support roles.

All in all, Black Panther was a solid movie and another big hit from Ryan Coogler and I can’t wait to see what he does next. I’m also interested to find out how all of this fits into Infinity War since we didn’t get a glimpse at the soul stone, the one infinity stone remaining to complete the set, and everyone seems to think it’s in Wakanda somewhere.

I’ll also make one recommendation to end my review – if you haven’t watched Luke Cage yet on Netflix, I highly recommend it if you liked this movie. Luke Cage is a member of The Defenders, a group of TV shows on Netflix that are also a part of the Marvel Cinematic Universe. It stars Mike Coulter in the titular role, with Oscar-winner Mahershala Ali (Moonlight, House of Cards) as the villain and also stars Rosario Dawson and Alfre Woodard among others. It is easily the best TV show that Marvel has done within this universe (in my opinion), although I will warn it is very graphic as the TV shows are very violent and would be hard R’s in the theaters compared to the PG-13 nature of the movies now.