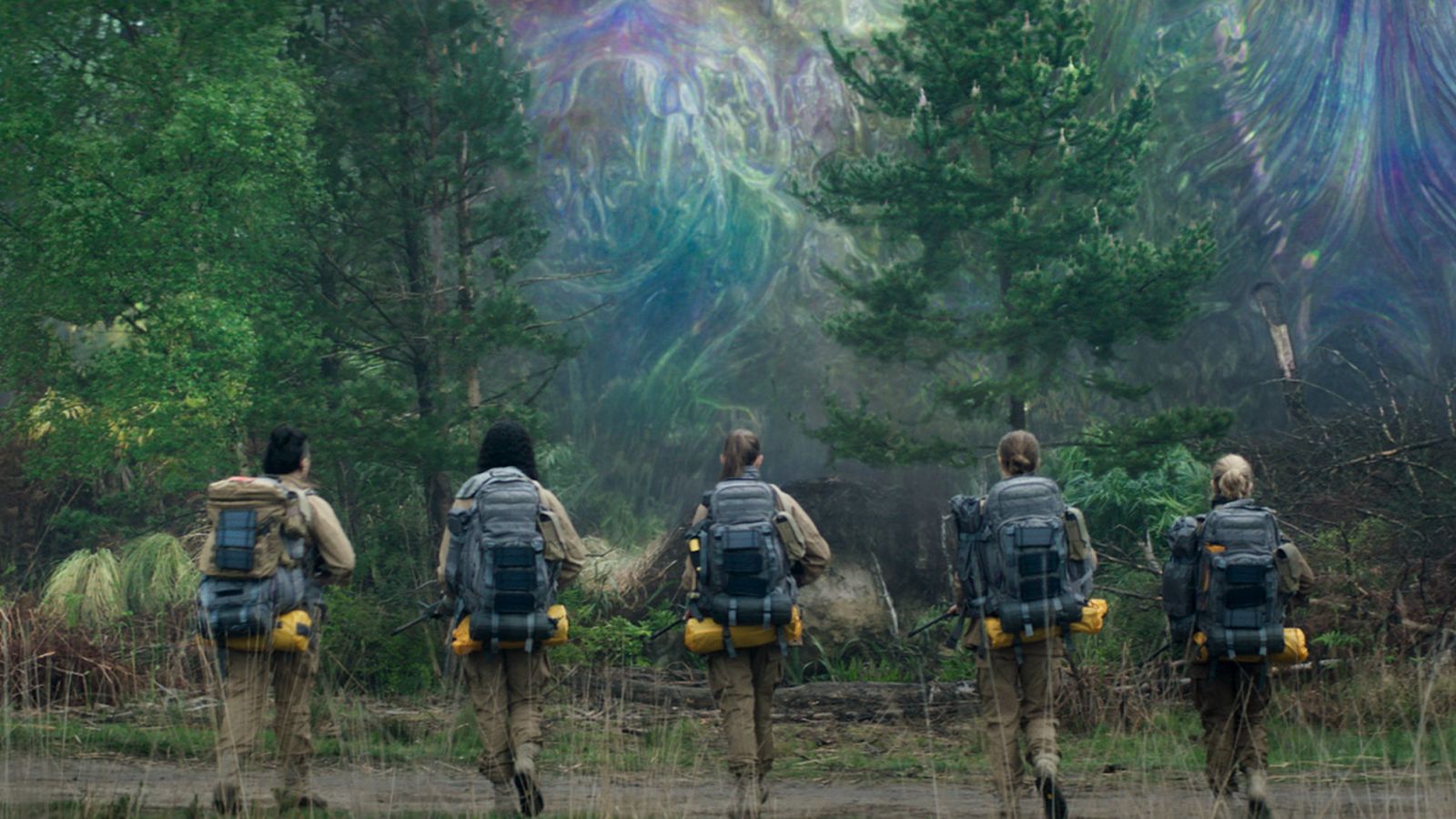 One of the most pleasant surprises last year was Denis Villeneuve’s sci-fi movie Arrival. A movie which looked good on the surface as a typical science fiction movie, Arrival proved to be something more than a movie that strictly focuses on special effects and action scenes like many sci-fi movies. It made you leave the theater and continue to ask questions about not only what just happened on the screen, but also ask questions about your own life and the choices we make that lead us down certain paths.

Alex Garland’s Annihilation does many of the same things, but does so in an even more extraordinarily beautiful and disturbing fashion. One line helps set things in motion, although it doesn’t come until about halfway through the film. Jennifer Jason Leigh’s character, Ventress, tells Lena (Natalie Portman), “Almost none of us commit suicide, and almost all of us self-destruct.”

It was a powerful phrase that helped set the tone for five women who went on what could be seen as a suicide mission as they entered “The Shimmer”, a mysterious aura that was created after a meteor hit a lighthouse in the southern United States. Many groups have gone before, but none have returned, at least not until Kane (Oscar Isaac) mysteriously shows back up at home after being gone for a year. We learn over the course of the film that basically anyone that volunteers to go in is “damaged goods” as no one who is healthy and happy would voluntarily enter the unknown. It’s as much a journey into the mindset of the five women that enter The Shimmer, and what has happened in their lives to put them in position, as it is a journey to figure out what The Shimmer actually is.

There have been comparisons to Andrei Tarkovsky’s Stalker from 1979, but I have not seem that particular film since it’s a Russian film from 40 years ago. I do get a vibe of 2001: A Space Odyssey, with a little Arrival and Blade Runner 2049 in there as well – just add some disturbing horror in there and you get Annihilation.

Annihilation is not a movie for everyone. It’s pacing is slow, allowing scenes to breathe without quick cuts and changes. Despite the marketing, there really aren’t any jump scares in the movie. This is not a typical science fiction movie, but it’s not a typical blood and gore horror movie either. There are a couple of scenes that get violent, but the entire movie is just…disturbing.

But it’s a beautiful disturbing. While you are seeing the bright colors and beautiful wildlife, you are also seeing a twisted and disturbing attempt at changing life as we know it. At times, you are as uneasy looking at flowers growing in a field as you are looking at a monster Alligator-Shark hybrid. There are many times that this film may lose people who are simply wanting to go watch a typical sci-fi or horror movie. Go see Black Panther or Jumanji if you want to be entertained. There are certain movies that require some work from the audience. If you’re willing to give it a little extra effort, the journey is worth taking and the reward is an amazing cinematic experience.

Most reviews typically get more into the plot, but I am going to stay away from saying any more than I’ve said already. I feel like going into this movie with limited knowledge helps you enjoy the experience a little more. I haven’t read the book, but from those that have, the impression I get is that this is more of an interpretation of what Alex Garland read, compared to doing a straight up adaptation of Jeff VanderMeer’s novel.

I also have to commend Garland for standing up for his vision and the version of the movie that made it to theaters and not giving in to Paramount who wanted to change the film because it was “too intellectual” and “too complicated”, and demanded changes to make it appeal to a wider audience. Garland stood firm along with producer Scott Rudin. However, due to clashes with financier David Ellison, the international distribution was sold to Netflix, similar to The Cloverfield Paradox. While I do believe it is better in theaters due to the amazing effects of the movie, I hope more eyes get on it because of Netflix.

This movie won’t make much money. It cost $40 million to make and I’ll be shocked if it even makes it to that point. While it’s nice to see a shift into investing in deeper science fiction, it’s sad to see that the films aren’t doing well at the box office, such as Blade Runner 2049 and most likely this.

I don’t know what is next for Alex Garland. Ex Machina was a masterpiece and this was right there with it. It may not end up being the best film of the year, as there were minor things here and there that I might would have liked to be done differently, but it is well worth investing a few dollars to go see it on the big screen while it lasts.

If you’re going to watch a trailer, only watch the teaser below. It gives a better feel for the movie than the full trailer which markets it as more of a jump-scare horror movie.