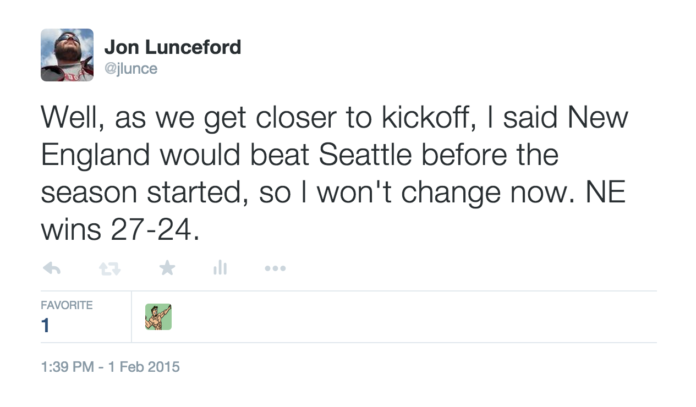 I don’t know a lot of things. I’ve always been one to learn a little about everything, but not a lot about any one thing. The one thing that might be an exception to that, is football. I played the game as a kid when Homewood first started having a pee-wee program. I played it through middle school, high school, and then college. It might have only been Birmingham-Southern and not Alabama or Auburn, but it was still college football. I wasn’t the most physically gifted athlete, but I was good enough to play and start my first year at BSC before getting injured and having to quit.

But I feel like I’ve always had a knack for the game mentally. I love listening to old coaches ramble on about formations and play calling. The X’s and O’s are something I always love to study.

I don’t like to brag much, but I do have to just point out the fact that I’ve picked the last three Super Bowls before the season even started. Next season, I’ll probably pick the two last place teams in the NFC and AFC, but I’ve been able to claim a little something these past few years.

In 2012, I called Baltimore winning it all, although I didn’t pick a Super Bowl loser. I picked it on the Meltdown one night before the season, and sure enough – it happened. My colleague Tim Melton will say my pick should have an asterisk next to it since I said the Ravens didn’t look like they could win the Super Bowl halfway through the season due to many injuries and other issues, but when the team was healthy – they were the best. Sure enough, Joe Flacco led the team to the Lombardi trophy. You can go listen through old Meltdown episodes to find when I said it.

If you notice the time, it was actually two minutes after kickoff of the first game, but close enough. Sure enough, Seattle made it to the Super Bowl and put the hurt on Peyton Manning and the Broncos.

This season, I said I liked New England to be the representative over Denver, and Seattle would make it back. This was mostly because I thought Peyton wouldn’t be as dominant, but Brady would. And with Seattle, they had a healthy Percy Harvin who would add so much to that team. Little did I know that they would ditch Harvin. But still, I stuck to it and went with New England over Seattle. Green Bay probably should have been there, but with the choke of the century/comeback of the century, Seattle kept my prediction true.

Then this afternoon about 1:30, about four hours before kickoff, I analyzed things and chose my final score prediction for the two teams I thought would be here from the start.

Well, as we get closer to kickoff, I said New England would beat Seattle before the season started, so I won't change now. NE wins 27-24.

I figured it might come down to the last second, with New England winning 27-24. I was so close to picking that perfectly.

Still, I’d say I’ve done well for myself over the last few years. I actually prefer picking NFL games over college, mostly because I have a bias for Alabama and it makes it hard to pick. I like Baltimore in the NFL (and kind of Tennessee), but not enough to care one way or the other.

It’s stupid to pick this early, but if I had to choose, I’d say we’re looking at Green Bay vs. Baltimore next year. Don’t take that with too much seriousness (unless of course it’s right). We’ll have to see what free agency does, and how the draft goes for Indianapolis who needs help in certain departments, and how well the Patriots hold up. Seattle needs a receiver they can rely on and they will be back in the mix as well.