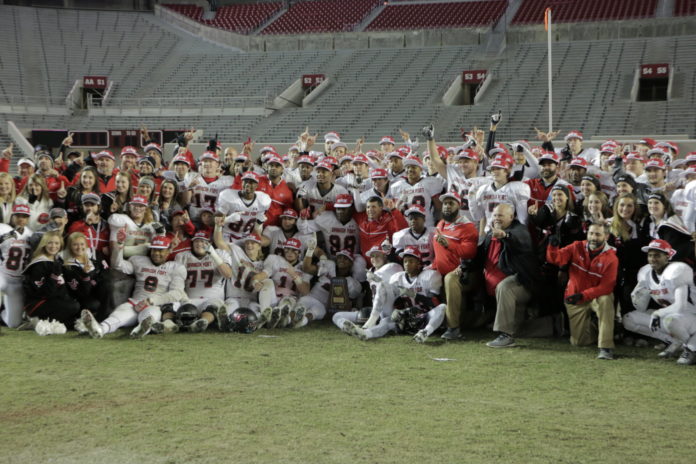 The new classification numbers are out from the AHSAA, and there are a few big moves that could impact things moving forward, especially in football.

Let’s start at the top and work our way down. If you want to look at all of the regions and who moved up and moved down, check out the full list here.

One fun fact, all of the state champions stayed put in their classifications.

In addition to this, the Champions Challenge was announced:

6A Hillrest-Tuscaloosa vs. 5A Demopolis, Thursday at 7 pm
7A Hoover vs 7A Central-Phenix City, Friday at 7 pm
4A Andalusia vs 5A Brooks, Saturday at 7 pm

In 7A, the south stays the exact same, no surprise there. We thought Park Crossing might bump up, but they stayed in 6A. The north is where there are a few slight changes.

Probably one of the biggest losers in reclassification is Huffman. Although they squeaked into the playoffs last year in 6A, they have to now jump into region 3 with the big boys.

For them to jump in, someone has to fall out. As you can notice, that’s Hewitt-Trussville. They move up to Huntsville and play with those teams such as Bob Jones, James Clemens and Gadsden City. The Huskies will have to travel…a lot. It’s the unfortunate fact of how regions are done.

Florence and Austin were the top two 6A schools. If one or both of them had jumped up, Hewitt could have stayed in a 9-team region in Birmingham. But the AHSAA decided to leave things at 32 teams, so Hewitt is the odd man out.

Easily the biggest changes come in Birmingham. The real winner? Homewood. Homewood loses Briarwood, Walker and Minor – ALL of the playoff teams from 6A Region 5 outside of the Patriots over the last two years are now gone. So who do they gain? Parker, Ramsey, and and Shades Valley. Shades Valley has struggled a bit over the last couple of years but should be able to be a playoff team in Region 5. Parker and Ramsay were competing for a 5A Region 5 championship two years ago, and still looked solid last year, so they should be able to at least compete.

Poor Carver, they got a raw deal having to go to Region 6 instead of 5. But now Minor and Walker get the chance to play against Clay and Gardendale every year. Minor had both of those teams plus Pinson Valley on the schedule the last two years and went a combined 3-4 with a score of 165-240. Two of those wins were over Pinson, but they are familiar with all three of them.

In the northern regions, not a lot of moving, other than Cullman drops to Region 7 an Hazel Green has fallen into 6A Region 8 from 7A. I’m not so sure that is that easy of a move.

One more thing to note – Pelham is gone from Region 5 as well. That’s due to Helena moving up and the new school finally catching up to it’s counter-part. They both move to 6A Region 3 with Opelika, Chelsea, Benjamin Russell and others.

Not many huge moves in the southern regions, just note that basically Region 3 and 4 switched places, with a couple of minor changes.

There are a decent number of changes in the north, starting in Region 5. What was the Birmingham city region, is now more of a mix of central Alabama schools since three of the former schools moved up to 6A. Briarwood drops down and immediately becomes one of the favorites to win the region. Wenonah and Pleasant Grove do stay put, so they will compete as well. Other additions include St. Clair County, Shelby County, and Moody along with Woodlawn, who dropped from 6A Region 6.

Region 6 adds Curry, Corner, and Fairview to it, along with West Point from Region 8. The biggest thing for 5A state runner-up Mortimer Jordan is that Alexandria has been moved to Region 7.

With Region 7, we see Arab and Scottsboro dropping from 6A to join as well. That gives Guntersville some stiff competition moving forward.

Region 8 adds Lee-Huntsville, a playoff team from 6A last year. They also add Ardmore and Brooks who moved up from 4A. You’ll notice Jemison on the list – that is JO Johnson and Butler’s new combination of a school, so really no change there.

4A got a little more interesting this year with some of the new additions. Most notably, Leeds and Madison Academy are back in the same classification again, and we could be have another clash in the state title game.

The south really didn’t change that much, although Tallassee did drop from 5A, and could be a playoff team in Region 3 with Leeds and Munford.

The north saw more additions as Anniston drops to 4A Region 5 and Oneonta moves there as well. Region 6 was formed with a group of new teams including Cordova, Dora, 4A state runner-up Fayette County, and Winfield. Region 7 becomes interesting as two playoff teams from different classes move in – Madison Academy from 3A and Madison County from 5A. That will be a great match-up in the northern half of the classification.

Not many notable changes in the south outside of Montevallo moving down to 3A Region 4. They join American Christian and Gordo in a decent 3A region.

Region 5 and 6 basically switched numbers, but Region 5 added Randolph County who was a powerhouse in 2A last year before being upset by Fyffe in the playoffs.

A few teams drop down from 4A into the 3A northern regions, but other than that, it’s mostly the same groupings.

2A in the south stays pretty much the same other than a couple of 1A teams jumping up in Region’s 1 and 4. Elba stays put, and we thought originally they might move down to 1A. They are near the bottom and Fyffe is near the top, but they both barely stay in 2A.

1A probably changes the most. There was a region with only 5 teams in it before, but that’s not the case now. A few teams drop down from 2A, but the south stays mostly the same.

One notable change is Maplesville moving to Region 3.

Then something weird happened. Regions 5, 6, and 7 all shifted down one. So all of Region 5 is now 4, and because of that, now playing in the south half of the state. Region 7 moved all teams to Region 6 as well. The old Region 6 moved most of it’s teams to Region 5, but picked up Holy Spirit and Pickens County.

Because of all of the shifting, Region 7 picks up teams from all over the place. Here is how 1A Region 7 looks now: