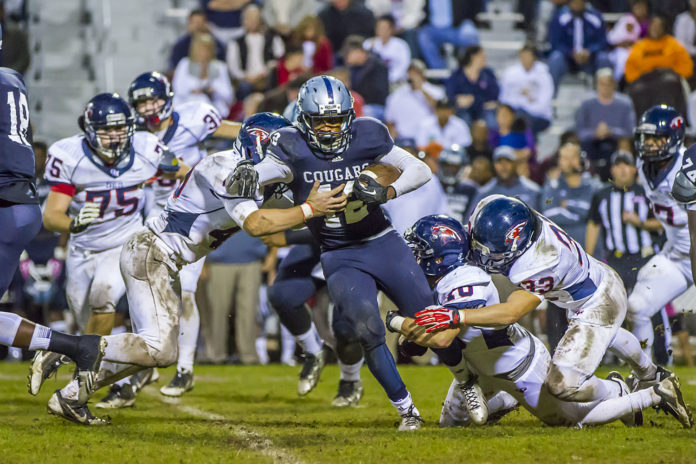 We’re less than three weeks from the first football Friday night here in Alabama, so it’s time to start thinking about who the top players and teams will be this season. This will be the second year of the 7-classification system, so the regions and classifications will all stay the same as last season.

The main overall award that is given out each year is Mr. Football, which is essentially this state’s Heisman Trophy. Without any injury, Ty Pigrome will be a strong candidate to win Mr. Football this season. Even if Clay-Chalkville can’t repeat as champions, Pigrome proved he is one of the better high school players in this state, and finished just behind Kerryon Johnson of Madison Academy last year. He isn’t one of the highest rated recruits coming out of the state this season, so there will be plenty of competition.

Denzel Mitchell out of Hamilton will definitely pose a threat. The Ole Miss commit is coming back from an injury and will be looking to make an impact in his final season before heading to college. Both TaDarryl Marshall and Tre Nation from Leeds are strong players as well, and are looking to help lead the Green Wave to another title.

My Mr. Football watch list this season (in alphabetical order), along with their committment if applicable:

Class 4A Super 7 – Leeds over Deshler

Class 1A Super 7 – Maplesville over Hubbertville

It should be a great season, and I can’t wait to see what happens in this second season of 7A to see if someone can dethrone Hoover. I think Central has a good chance to be one of the better teams in the state, if not the best. They were really close last year, but dropped a bad second round game to region rival Prattville.

Clay-Chalkville will once again be up there, I have no doubt in my mind they were the best last year among all classifications. The south will be a fight between Spanish Fort and McAdory. I’m not sure Saraland will be able to hang like they have the last couple of years, but that should be a solid region with Spanish Fort, Saraland and then Daphne and Blount as well. In the north, the only real possibilities I see to take out Clay-Chalkville will be Shades Valley in their own region, or possibly Florence. Region 5 and 7 are a little too weak, despite some good programs such as Homewood, Briarwood, and Southside.

In 5A, last year’s North bracket was a bit of an anomaly. We ended up with two non-region winners in the North finals. I look for Ramsay to be a bit stronger this year, along with Parker, to keep Pleasant Grove from squeaking in. East Limestone and Guntersville are two teams that will be strong competitors as well in the North, but both got upset by the eventual North finalists. In the South, it’s Region 1’s to lose between St. Paul’s and Jackson. The rest of the regions are a little weaker than Region 1, and I can only see Greenville, or maybe Calera upset either St. Paul’s or Jackson and wind up in the Super 7.

In the lower classifications, the champions from last year are definitely the favorites this year. Leeds and Madison Academy are going to be favorites year in and year out now that they are in different classifications. They will face off to start the season in the Champions Challenge down in Montgomery on August 21. That should be a great game to start things off. In 1A and 2A, Maplesville and Fyffe were so dominant last year, it’s hard to think it will be any different this season, but I think if anyone can do it, it will be Washington County over Fyffe in 2A. They were upset by Elba last season in the South finals, but they were a strong team, outscoring opponents 638-95 all season.